A WILD NIGHT AT THE OFFICE

Each year, Hollywood produces several comedy movies that are labeled “R-rated adult comedies”. These films have a plethora of jokes, and gags that are filled with raunchy, crude, and crass. Some hit their mark and have become quite famous (American Pie, The Hangover, 21 Jump Street, etc.), while some miss their mark and fail to ignite laughs let alone entertainment value. Regardless, it’s a sub-genre (in movie’s comedy) that has elevated itself with plenty of hilarious scenarios and lude jokes. Now, Paramount Pictures and directors Jon Lucas and Scott Moore, present the newest R-rated comedy feature Office Christmas Party. Does this holiday themed movie shine as the best comedy film of 2016 or should you pass on partaking in the office party festivities. 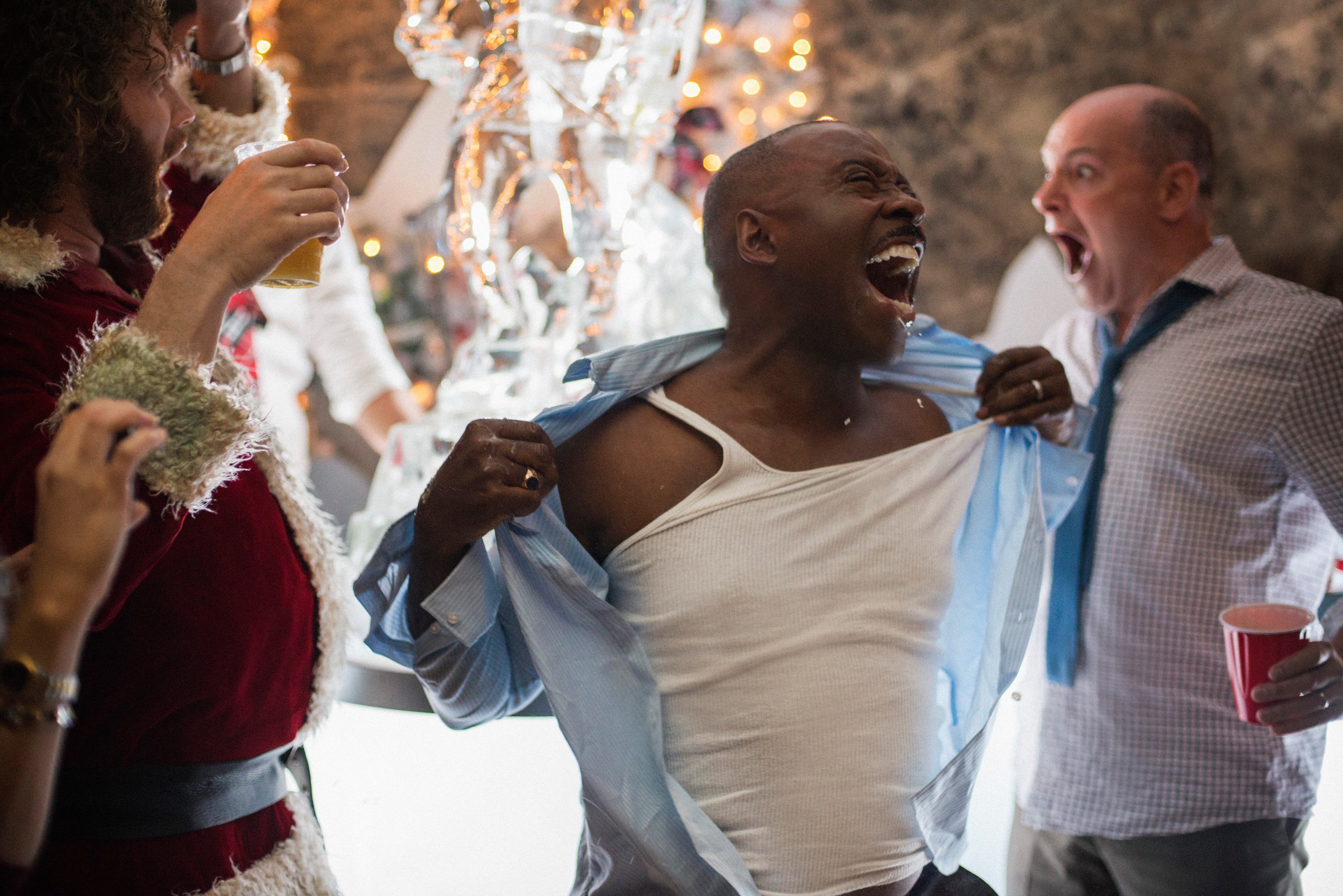 Clay Vanstone (T.J. Miller) is the manager of the Chicago-based branch for the technology company Zenotek. Unfortunately, Clay’s branch is struggling, failing to meet the financial goals set by Zenotek interim CEO (and Clay’s sister) Carol Vanstone (Jennifer Aniston). With Carol’s decision to shut the branch down, placing many of the employees out of work, Clay, his chief technical officer Josh Parker (Jason Bateman), and his lead engineer Tracey Hughes (Olivia Munn), hatch a plan to save the company, hoping to woo Walter Davis (Courtney B. Vance) of Data City and a $14 million-dollar contract from him. Unfortunately, Walter rejects the pitch from the trio and (in a last-ditch attempt of desperation), Clay, going against Carol’s orders, invites Walter to their office Christmas party, showing the hopeful client had good time and (more importantly) Zenotek’s culture. However, the office holiday get together explodes into a wild extravaganza as many of the employees let down the hair, including the uptight HR department head Mary Winetoss (Kate McKinnon), and expose themselves in the party’s crazy revelry. This, of course, causes for trouble Clay, Josh, Tracey as the party (and events) go out of hand, especially when Carol catches word of office Christmas party. 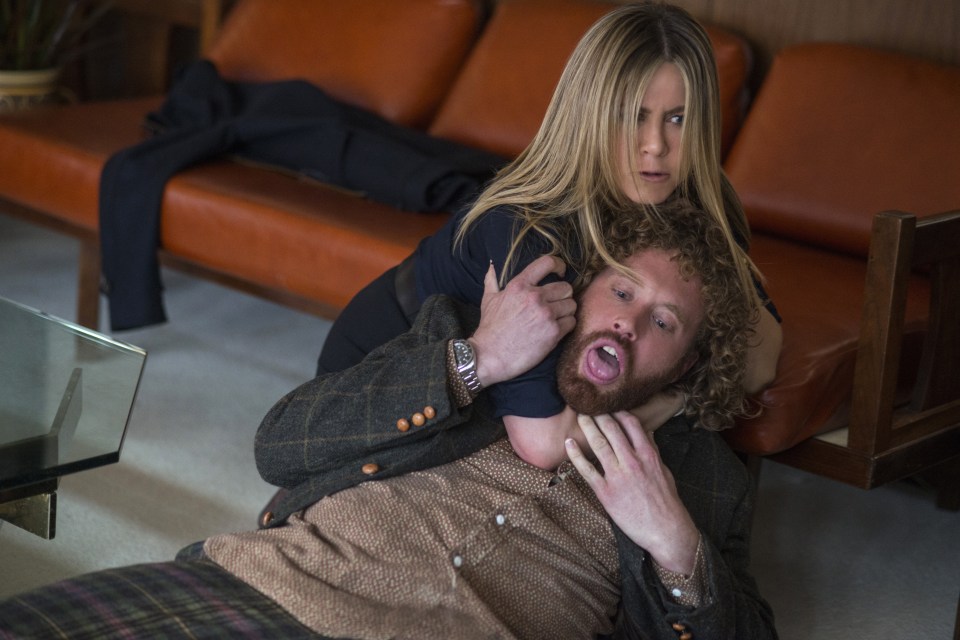 What can I say…I do love raunchy / R-rated comedy films. Maybe its humor, the vulgarity of it all, or maybe that they usually choose from same pool comedy actors / actresses to star in these films. Of course, some of my favorite included American Pie (the first one and maybe the second one), She’s Out of My League, Sisters, 21 Jump Streets, Wedding Crashers, and The Hangover (the first one). As for this movie, I remember seeing the trailers for the movie Office Christmas Party and I have to say that I was very intrigued to see it. It looked funny and had an impressive (and funny) cast, so I was definitely going to see it when it got released in theaters. After seeing it, I felt that while it stumbled in certain areas, Office Christmas Party was indeed funny. It wasn’t the absolute best comedy movie of 2016, but it was indeed a fun comedy film, partaking in its raunchy humor and crazy gags from its comedic stars.

Office Christmas Party is director by Jon Lucas and Scott Moore, who’s previously done work on The Hangover (working on the screenplay) as well as writing / directing the other 2016 comedy film Bad Moms. With that knowledge of past works in movies, Lucas and Moore bring that type of adult R-rated comedy to this movie, bringing plenty of raunchy angsts and scenarios to the film’s narrative. There’s plenty of sight gags, crude jokes, and lude remarks, and several one-liners that are indeed funny. Personally, I do love these type of raunchy comedy films, but (as they say) comedy is subjective and its genre is broad. Thus, some might not buy into the movie’s sense of humor. However, if you do, you’ll find Office Christmas Party pretty funny and entertaining to watch. The party itself is one of the film’s main focal points of the narrative, seeing its cast of comedic characters interacting with each other and playing out wacky scenarios. It’s a funny setup (similar to 2015’s Sisters) and does have several moments that will bring laughs out of you. Also, the film utilizes the Christmas spirt and holiday revelry in its movie (with decorations, apparel outfits, and a few Christmas songs being played), but its merely in the film’s backdrop. So, those looking for some type of holiday theme / message in this comedy feature, will be disappointed

Of course, problems do arise in the movie, which tarnish Office Christmas Party from being the best comedy film of the year. While the scenes of the party itself are hilarious and funny, the problem is that it loses steam towards the beginning of the third act when most of the main characters leave the party. The party still goes on and gets a bit more wilder and destructive, but it loses its spark and doesn’t have the same caliber as it started out with. The reason behind that is most of the comedic talents from those actors / actresses carry the movie. Another problem (that’s in conjunction with that idea) is that the film “cuts” away from all the zany antics of the party, with minor sub-plots involving its characters (both major and minor). While I do understand that the story’s plot and overarching narrative has to take shape, which seems a bit bare-boned, it seems a bit distracting when the movie want really wants to “explode” in the partaking of the party’s wild shenanigans. Lastly, there’s a bit of clunky material that acts as the “MacGuffin” towards the third act (I can’t do into detail about what it is as it might spoil the movie for some). Suffice to say, that seems a bit farfetched and it just seems like a half-baked idea from the screenplay writers. In short, if the film focuses more on the events of the “party” rather than venturing off elsewhere and meandering though some minor sub plot devices, Office Christmas Party could’ve been the next Hangover movie.

The cast in Office Christmas Party is pretty recognizable one, a wide selection comedic actor / actresses that bring their comedy talents and charm to the film’s proceedings. Of course, Jennifer Aniston, Jason Bateman, T.J. Miller, Olivia Munn, and Kate McKinnon are the big names attached to the film bringing the necessary “star power” to the feature, which they do, but some shine brighter than others. Who brings the most laughs are T.J. Miller and Kate McKinnon as Clay Vanstone and Mary Winetoss. Both these two comedic talents have proven to more hits than misses in their careers, with Miller is hilarious in various films and animated projects and McKinnon is definitely a memorable part in the recent Ghostbusters remake. While Clay and Mary may not be their best roles to date (maybe Mary in McKinnon body of work), both characters are indeed one of the film’s strengths.

Jason Bateman is good at playing the straight-man character in comedy films, which he does in Office Christmas Party as Clay’s chief technical officer Josh Parker as his even-keel (monotone) sounding voice fits perfectly for the character. However, while he performs well in the movie, it’s not his best role (in my opinion) as he isn’t given much comedic scenarios to play around with. Likewise, Olivia Munn’s character Tracey Hughes, a lead engineer at Zenotek, doesn’t have comedic scenes, which is fine because Munn isn’t known for her comedic chops, and (in truth) seems to channel her character Sloan Sabbith from HBO’s show Newsroom. Lastly, Jennifer Aniston’s Carol Vanstone is (by all means) the definition of the “mean-spirited” boss archetype character. However, like her co-stars, Aniston carries herself well and does play in the film’s humorous bits.

The supporting players in Office Christmas Party are, like their big-named co-stars, are a collective group of actors / actresses that prove to be effective in their comedic talents. This includes HBO’s Ballers star actor Rob Corddry’s Jeremy, Sam Richardson’s Joel, Da’Vine Joy Randolph’s Carla, and Trainwreck co-stars Vanessa Bayer and Randall Park as Allison and Fred. There are a couple of surprises hits in the movie (in the supporting cast) with Courtney B. Vance being chief among them as hopeful Zenotek client Walter Davis (he gets some funny bits in a few scenes) as well as Karan Soni (Dopinder from Deadpool) as Nate, and Jillian Bell (love her in 22 Jump Street) as the gun-toting pimp Trina. Like I said, these characters are usually thinly written (are in this movie), but are elevated by their performers to give a good laugh (or at least a chuckle) when their on-screen.

The mother-of-all office holiday parties erupts in the new comedy film Office Christmas Party. Directors Jon Lucas and Scott Moore paint a very “festive” non-denominational office mixer for viewers to enjoy and be entertained with. However, the film’s script and certain events throughout the film make the feature (and the party) loose its flair and prevent the movie from reaching its lofty comedy potential. Personally, I liked it. Yes, it wasn’t anything new or original and there were some problems here and there, but the cast was good and I did enjoy the film’s comedy (I laughed a lot during the film). Thus, I would recommend this movie. If you enjoyed Bad Moms or last year’s comedy Sisters or even the film’s comedic cast, then Office Christmas Party will definitely be to your liking. All in all, while it may not be best comedy of the year, Office Christmas Party still offers plenty of R-rated / raunchy laughs, a vast recognizable cast, and skoosh of holiday spirt.

Office Christmas Party  is rated R for crude sexual content and language throughout, drug use, and graphic nudity