TALENTED AND COLORFUL, BUT OVERSTUFFED AND UNNECESSARY

Back in 2011, Rio was a surprising hit, grossing nearly half a billion at the box office. This animated “Fish out of water” tale of Blue, a domesticated blue macaw bird, and his misadventure in the city of Rio de Janeiro was well met; appealing to viewers with a good story, colorful animation, catchy songs, and celebrity voice talents. Three years later, the team of Blue Sky Studios debuts the next chapter of Blue, Jewel, and their colorful friends titled Rio 2.  Does this follow-up sequel warrant a glance from viewers or has the stimulation and spectacle of Rio’s success gone out in this second adventure?

For the rare Spix’s Macaw bird Blue (Jesse Eisneberg), life in Rio is good. Finally coming to terms with his new surroundings, Blue has settled down; mating with the female bird Jewel (Anne Hathaway) and share a common parental love with their three children. All seems well for Blue and his family until Blue’s owner Linda (Leslie Mann) and her husband Tulio (Rodrigo Santoro) find proof of other Blue Macaw birds deep in the Amazon jungle. Jewel, feeling that her children as well are her husband are trapped in a world of modern human amenities, organizes a road trip to visit the Amazon. Once there, they find a sanctuary of Spix’s Macaw birds as well as Jewel’s long lost family; brining new challenges for Blue in the form of Jewel’s father Eduardo (Andy Garcia) and her former lover Roberto (Bruno Mars). As Blue tries desperately tries to adjust to his jungle surroundings (Trying please his wife and children), a former adversary named Nigel (Jemaine Clement) has followed him to the Amazon to exact his “theatrical” revenge.

Another movie review from my old blog that I decided to “dust off” (i.e. tweak) for you guys. Enjoy! In general (and on a personal level), Rio was a good animated movie. It wasn’t the absolute best, but it definitely held its own to rise above several other mediocre cartoon / kids features that year. However, it wasn’t a movie that needed to be expanded upon. The studio behind this movie (Blue Sky Studios) is famous for stretching out the once favorable Ice Age movie into a long winded franchise that’s loss its appeal and charming over the course of its unwanted sequels. Given its popularity with kids and its lucrative potential, the characters of Rio, unfortunately, are beginning to walk (Or rather fly) down that same path; beginning with Rio 2.

The main problem with the film is that there are too many things going on with numerous characters. There’s the main story that follows Blue and his family, which carries about three minor sub-plots within, then there’s story thread for the minor characters from the first film (Rafael, Pedro, and Nico), Nigel’s revenge is another one, and then the two humans (Linda and Tulio) is the final one. As you can see, there’s a lot going on and eliminating one or two could’ve bettered the movie rather than hindering it.  The film also doesn’t have a clear defining theme like how it did in the first Rio. The result is cobbled up version with plot points from the first one (which is a little redundant), a somewhat “Meet the Parents” scenario, and a rivalry with another tribe (which is pointless and only shows off an elaborate bird-like soccer game they call “The Pit of Doom”).

It also doesn’t help that so many characters from the first movie return with new characters from Rio 2; causing a long winded narrative with of tedious time spent on minor sub-plots and gratuitous appearances. All these tangled threads of storytelling come together at the end with a climactic battle to “Save the Forest” from the illegal loggers, but its less spectacular than how it sounds; playing out like a kid friendly version of the final battle in James Cameron’s Avatar. The movie even debunks the potential underling message of “Cutting down trees” and “Saving the rainforest” (Avatar had it, Ferngully had it, The Lorax had it). Rio 2 just simply pushes the opportunity aside; making room for comical gags and unnecessary storylines. The message is, of course, a paramount importance in real life and it’s a missed opportunity for the filmmakers.

Rio 2 is not all bad as there are several positives in its likeability column. Its animation, which is most likely on-par with other animated movies, is very vibrant with lush, deep coloring that will surely stimulate the eye. The film’s opening is very impressive with a festive New Year’s Eve party that’s partaking all over the city of Rio de Janeiro. With singing, dancing, and fireworks, it’s a great way to open the film; carrying the celebration-like feel of the city of Rio that the first film beautifully captured. There are other scenes in the movie that incorporate a lot of singing and dancing that are executed with excellent chorography and catchy songs that still embraces a contemporary Latin vibe to their musical numbers. Though the movie is bloated with too many characters, all returning ones are reprised by their celebrity voiced counterpart. Jesse Eisenberg headlines the movie as the main character of Blue. He’s stuttering and nervousness voice for Blue still works and makes him very sympathetic for viewers. Anna Hathaway’s Jewel is still good. She has a short lullaby to sing, but it would have been neat if the filmmakers made a song of her character so she could sing like she did in Les Miserable. It’s also worth noting that Nigel voiced by Jemaine Clement returns; bringing most of the laughs to a movie that’s only mild comedic at best. His character’s theatrical flair is always present and his Latin influence rendition of “I Will Survive” is hilarious.

Other voices from the first film include Leslie Mann as Linda, Rodrigo Santoro as Tulio, George Lopez as Rafael, Tracey Morgan as Luiz, Jamie Fox as Nico, and Will.i.am as Pedro. Adding to the star-studded cast is singer Bruno Mars as Roberto (Jewel’s old flame), seasoned actor Andy Garcia as Eduardo (Jewel’s stern father), and the talented Kristin Chenoweth (A poisonous frog who has the affectionate love for Nigel). Their additions are what you expect from an animated movie, but it’s Chenoweth who steals the show of the newcomers with a broadway-esque song she gets to sing and her high cartoonish sounding voice that makes her sort of “wild card” of Rio 2. 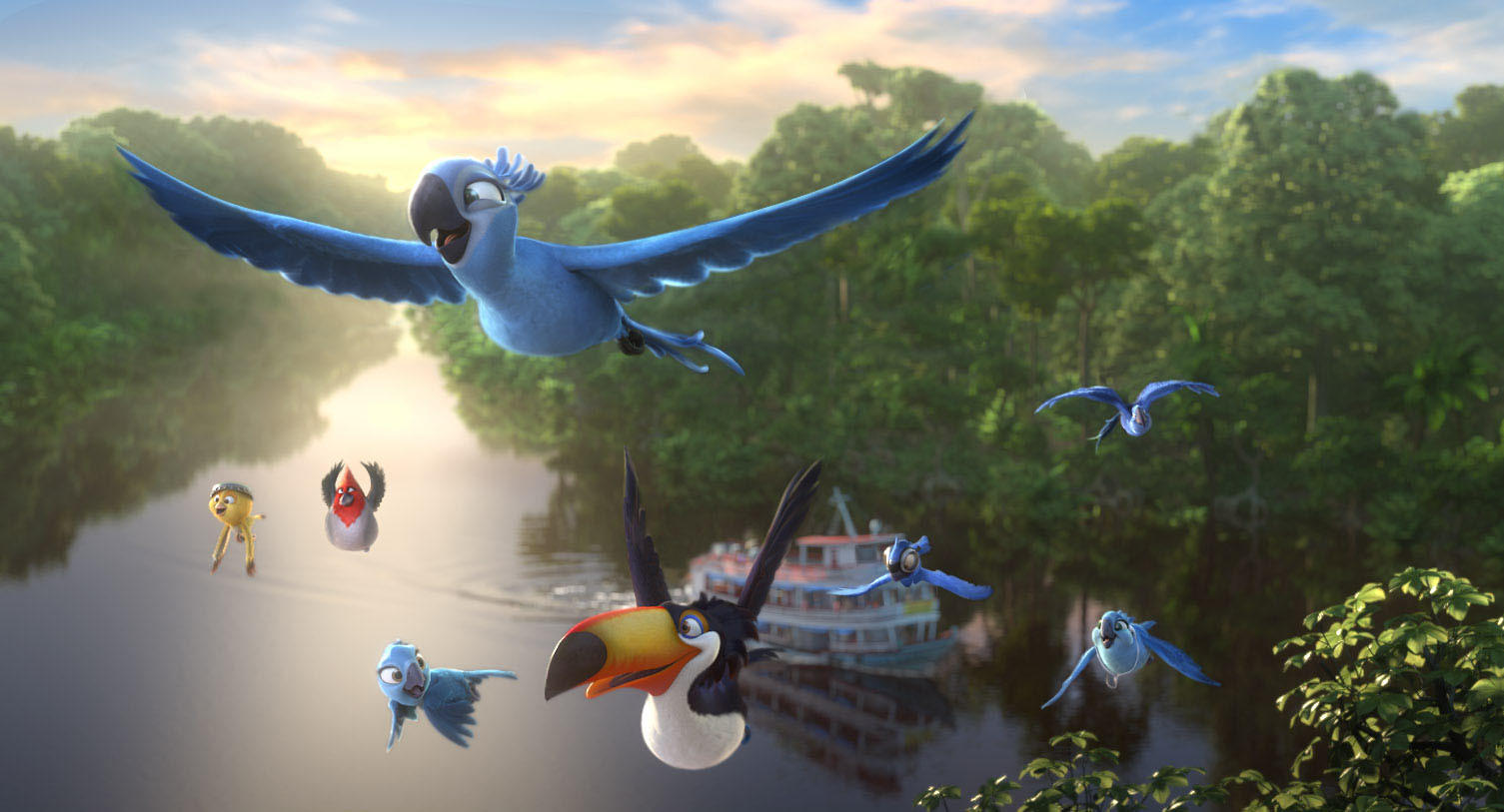 To put it simply, Rio 2 is mild entertainment fun. Its colorful visuals, celebrity voice talents, and catchy Latin flavored songs can’t save this uninspired (and less funny) animated jaunt; from becoming mediocre rather than rising as a worthy successor to the original film Rio. A sequel that’s too busy, too winded, too misguided, and lacks that special something that made the first film charming.  Though, at the end of the day, it’s a kid’s movie and, of course, kids (more than the younger ones) will enjoy this animated film. Let’s hope that Blue Sky Studios has learned their lesson with the Ice Age movies and don’t exhaust what made Rio precious to beginning with by creating more unwanted and less favorable sequels.