The biblical tale of Ben-Hur or rather “Ben-Hur: A Tale of the Christ” (as it is officially called) has been hailed as “the most influential Christian book of the nineteenth century”. Written by author Lew Wallace and published in 1880, the story recounts the adventures of Judah Ben-Hur, a fictional Jewish prince from Jerusalem, who is enslaved by the Romans and eventually becomes a charioteer and later a Christian. It’s also worth noting the tale of Ben-Hur runs parallel to the events of Jesus Christ, while Wallace’s weaves powerful themes into the narrative (betrayal, love, compassion, redemption, etc). The book went on to become best-selling book worldwide and was also praised by Pope Leo XIII (dang…that’s pretty cool!). Naturally, Hollywood has adapted the Ben-Hur source material several times, none more famous than the 1959 MGM adaption film Ben-Hur, with actor Charlton Heston playing the Judah Ben-Hur. Now Paramount Pictures and director Timur Bekmambetov revive the biblical tale with the 2016 retelling version of Ben-Hur. With a new cinematic lens of today’s current movie world, does this newest film iteration breathe new life into Wallace’s iconic story or is it a sword and sandal flop of a remake? 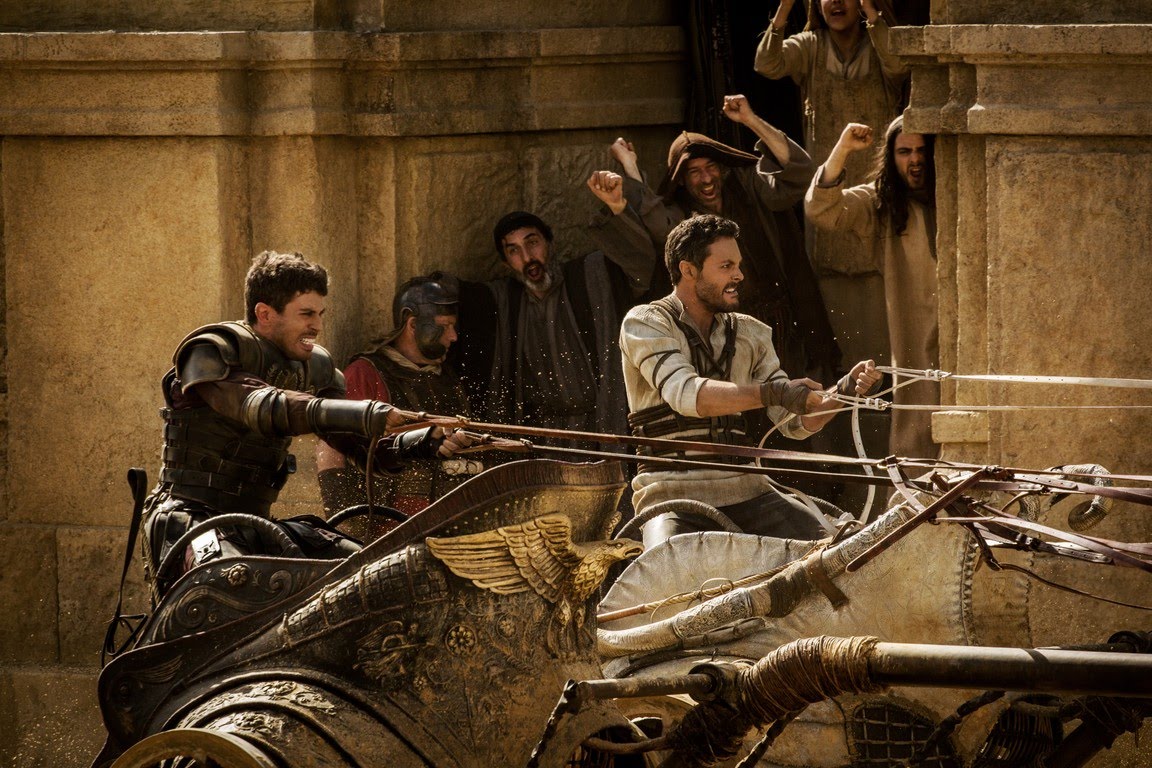 In the city of Jerusalem, Judah Ben-Hur (Jack Huston) is part of privileged Jewish family, blessed with riches, property, and status within the community. Judah’s adopted brother is Messala Severus (Toby Kebbell), a Roman-born man who’s always felt out of place within Judah’s family. Determined to make name for himself and with the mounting pressure of the Roman Army across its empire, led by Pontius Pilate (Pilou Asbaek), Messala decides to leave his old life behind and become a Roman Centurion. As the years pass, Judah, still concerned for Messala, put his faith into his love for his wife Esther (Nazanin Boniadi), while also being slowly exposed to the violent acts throughout Jerusalem as Roman’s occupation of the city increases, causing rebel zealots to act out against their oppressors. Returning to warn Judah about Rome’s advancement (with Pontius Pilate arriving in Jerusalem), Messala is horrified when his brother takes claim for a failed assassination attempt, subjecting the privileged man to Roman torture for years as a galley slave. Miraculously escaping from his hellish ordeal and nurtured back to health by Sheik Ilderim (Morgan Freeman), Judah is eager to learn what was lost while he was imprisoned, soon confronted by Messala’s arrogance and the power of Rome that stands behind him. While Judah seeks vengeance for what has been done to him and his family, a young Jew by the name of Jesus (Rodrigo Santoro) rises amongst the community of his people, drawing ire and concern from Pontius Pilate.

I personally haven’t read Wallace’s Ben-Hur novel, but I have seen the famous Charlton Heston movie of Ben-Hur several times (although I haven’t watch it recently. I think I should rewatch it again sometime soon). The 1959 Ben-Hur is a classic in the movie world, a titular film during the end of Hollywood’s Golden Age of films (i.e. Casablanca, The Ten Commandments, Gone with the Wind, etc) and went on to garnish 11 academy awards for its filmmaking achievement, a feat that has only been matched by three other movies. When I first saw the trailers for this new remake of Ben-Hur, I was extremely skeptical about it. I’m mean, compared to the acclaimed 1959 version, how could you top that? Unfortunately, my expectations for this movie were on point as the 2016 version of Ben-Hur, while having a strong fountain in its premise, is a far cry from cinematic greatness.

Bringing this remake to life once again is director Timur Bekmambetov, who has previously directed such films as Wanted and Abraham Lincoln: Vampire Hunter. Bekmambetov tries to make the old story of Ben-Hur new again by trying to add more action to the feature. Of course, the film’s big highlight scene is the chariot race and it is pretty good. Additionally, there’s another scene that involves Judah being imprisoned as a slave on a galley ship as a whole naval battle is presented from his perspective in the bellows of a slave ship. Very interesting concept. In terms of production, the studio went “big” for this remake of Ben-Hur. Costumes, set pieces, weaponry, and overall scale of the movie is grand and looks like a lot of money was put into the feature. So, regardless if you don’t like the movie, one can appreciate the look and feel of Ben-Hur in its high production quality. As a little fun fact, this 2016 version was filmed much like 1959 version, with most of the principal photography filmed in Italy (for various exterior locations) and then moved to Cinecittà studios for interior shots (the same studio where the 1959 version was filmed). As a side-note, the film’s score, composed by Marco Beltrami, is okay. It has fleeting moments of musical sweeps here and there, but nothing grand like a score from John Williams or Michael Giacchino.

Like I said above, Ben-Hur is a far cry from cinematic greatness. Why? For starters, the whole 2016 film (in general) did not need to be made. Yes, the narrative of Ben-Hur (as a whole) is a tale that’s worth telling and it’s a palpable one indeed. However, the story of Judah Ben-Hur did not “scream” to be remade and reimaging in another cinematic tale. Just like Ridley Scott’s biblical remake Exodus: Gods & Kings, Ben-Hur, as a whole feature, feels superfluous and (quite honestly) didn’t need to be made.

Next, while the narrative Ben-Hur is a strong one (utilizing the common themes of revenge and forgiveness), the movie doesn’t elevate itself beyond that and doesn’t come into its own. The film’s screenplay, done by Keith R. Clarke and John Ridley (who won an Oscar for 12 Years a Slave), seems very formulaic and a tad predictable of these types of movies. Even if you remove the whole aspect of the 1959 Ben-Hur, and just look at the film as its own entity, it still is riddle with problems from character development, which I will go into more detailed below, to story pacing, and to editing, which is horribly done at various points. In truth, with the exception of two big action scenes, the movie feels very bland and doesn’t discern itself from other sword and sandals movie or religious films of this time period. Interestingly, the 2016 Ben-Hur adds more of the Christianity aspect from the novel (more so than the 1959 film), but even its incorporation feels like an afterthought and doesn’t flow smoothly. In short, Ben-Hur is a great story, but the 2016 movie of it feels pretty unnecessary and vanilla.

The cast of Ben-Hur has several recognizable faces, but due to the film’s “bare boned script”, these characters are, more or less, shortchanged and fit squarely into stereotypical architypes roles, despite the theatrical pedigree that the actor / actress has. Actor Jack Huston, known for his role on the former HBO TV show Boardwalk Empire, plays the iconic character Judah Ben-Hur. Huston has a likeable presence on-screen, but, while I’m not doubting his acting ability, he just doesn’t come off as a Ben-Hur or rather a strong protagonist character (lacking the leading man charisma that the film probably needed). The same came be partially said with actor Toby Kebbell, who plays the Messala, Judah’s adopted brother / rival. Yes, the character is a very interesting one, a tortured character-like who is trying to find his place in the world and within himself, and while Kebbell can play villainy (see him in Dawn of the Planet of the Apes) and does what he can with the role, the character of Messala just comes up short from being memorable in an unmemorable remake.

In more supporting roles, seasoned actor Morgan Freeman plays Sheik Ilderim. While Freeman does what Freeman naturally does in a movie (bringing an overall gravitas to the proceedings), the characters isn’t anything new beyond the “wise mentor” architype. Next, actors Rodrigo Santoro and Pilou Asbaek, who play the iconic religious characters of Jesus of Nazareth and Pontius Pilate, are, more or less, stock characters in the film. However, they both look the part that they are playing. Lastly, actress Nazanin Boniadi, who plays Judah’s wife Esther, does little to contribute to the movie and really doesn’t leave a lasting impression.

The classic tale of revenge and forgiveness returns to the big screen with the epic action movie remake of Ben-Hur. Director Timur Bekmambetov reimagined feature of the iconic tale has the right idea in its scope and production value as well as several action scenes and in several cast members. Unfortunately, the movie doesn’t rise to the occasion, feeling complete unnecessary as a remake movie (in general), lackadaisical in its tones and in several characters (despite having a strong narrative foundation) and comes off as just another mediocre endeavor of a “swords and sandals” flick. To me, the film was pretty “blah”. It had fleeting moments here and there of cinematic greatness, but, for the most part, felt like a retread of past films whether spawning from its genre or in its thematic message. Because of this, Ben-Hur is a “Skip It” recommendation from me. If any inkling to see this movie, its best just to have wait for it to come to television next as it will most likely probably be on several channels (FX, TBS, TNT Showtime, etc). And again I ask this question…. why did Hollywood seek another movie iteration of Ben-Hur? Who knows? But even Morgan Freeman can’t make this remake of Ben-Hur memorable.