THE DAY THAT MOM QUIT

What does it mean to be a good mom? What does it mean to be a bad Mom? How does one raise their children? How do you balance your family life and your work life? These are all good questions and, for tense and purposes, there really isn’t a clear definitive answer on the subject. For better or worse, be it a mom or dad, can be stressful with so much going on in your personal life and the lives of your family (i.e. spouse and children). At some point, however, whether the person would admit it or not, every parent has their “breaking point”. The question is…what happens after that? In a comedic spin on such parental events, STX Entertainment and Huayi Brothers Pictures present the R-rated comedy film Bad Moms. Does this feature bring the laughs as well as some poignant meaning or is it a forgetful raunchy comedy? 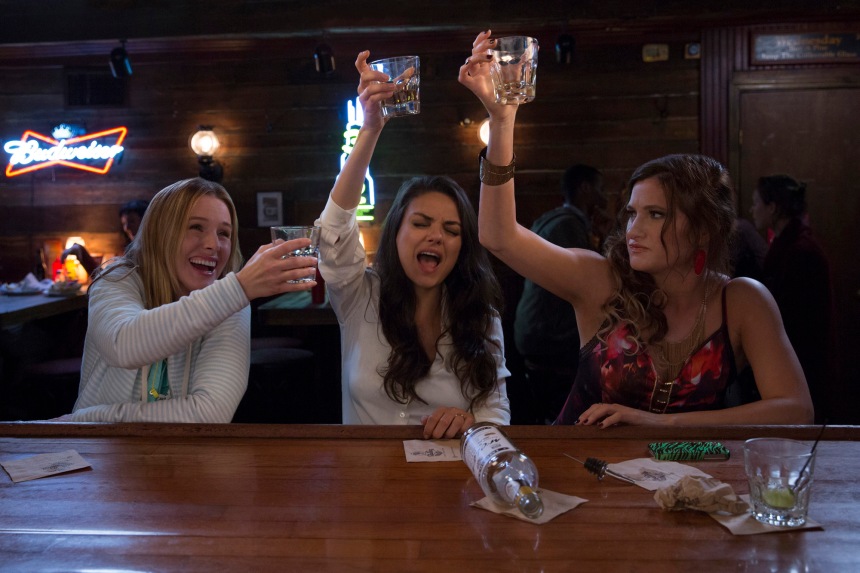 Overworked, underpaid, and unappreciated, Amy Mitchell (Mila Kunis) is struggling to raise children, Dylan (Emjay Anthony) and Jane (Oona Laurence), and recently kicking her husband Mike (David Walton) out of the house to due to his infidelity. Unable to keep up with the overpowering demands of parenthood, Amy finally reaches her breaking point, finally working up the nerve to quit her “mom” life, which draws ire from PTA queen Gwendolyn (Christina Applegate) and her underlings, Stacy (Jada Pinkett Smith) and Vicky (Annie Mumolo). Befriending the sheltered mom Kiki (Kristen Bell) and the oversexed single mom Carla (Kathryn Hahn), Amy learns to have fun again, going crazy with her newfound freedom while making moves on the hunky single dad widower Jessie (Jay Hernandez). Finally expressing herself away from domestic demands, Amy blossoms into finding herself, while challenging Gwendolyn for the PTA leadership, trying to become the liberating figure for mothers everywhere.

As I am not a parent (not yet anyways), I really can’t describe and go into great details about my opening remarks, which is what I do in this paragraph. I can tell you about my mom and that she is great and that she did tell me that she had to find her “balance” between raising my brother and I and also her work (my parents own a business together and are still happily married). So it worked out in the end for my parents, but not without a few bumps along the way. Anyhow, back to the movie review. I remember seeing the trailer for Bad Moms and died laughing, finding it to be hilarious and “must see” film for me to see in theaters. What did I think of it? Despite being predictable (for a comedy feature) and some thinly sketched characters, Bad Moms is a hilarious comedy with plenty of belly laughs moments, kooky shenanigans, and (if you dig deep enough) some interesting social commentary.

Bad Moms is directed (and written) by the duo Jon Lucas and Scott Moore, the pair who penned the script for 21 & Over and The Hangover. While I haven’t seeing 21 & Over, I have seeing The Hangover and loved it (still do), Thus, it seems Lucas and Moore took that “Hangover” notion when crafting and filming Bad Moms (i.e. it’s surreal and crazy premise). In truth, the whole concept of Bad Moms is quite a playful setup with plenty of comedy elements already locked and loaded (more on that below). Even though this is a comedy film, Lucas and Moore surprisingly interject a bit of social commentary into the movie, mostly through the character of Amy. This includes debonair / lazy life of Millennials (Generation X), the under value of marriage (i.e. cheating), the dealings of how to raise your children in today’s world (whether to do too much or too little or a combination of the two), and the difference between working moms and stay-at-home-moms or even the more “privileged” moms, who have the time to be consumed completely by PTA meetings. Some of these are played off for laughs and some are a tad bit more serious, but its good notion to be presented.

While seeing other comedies this year (Central Intelligence, Ghostbusters, Neighbors 2: Sorority Rising, etc.), Bad Moms is actually quite funny and surely does brings the laughs to the proceedings. In truth, I haven’t laughed so hard (and frequently) at the movie theaters since Deadpool (even though that was a superhero movie) or 2015’s Sisters. The jokes come quick and fast and are layered with raunchy R-rated crass humor and crazy shenanigans. So be ready for a lots of crude jokes. That being said, that’s the first problem with Bad Moms (i.e. for some). The comedy movie genre (as a whole) has a wide range from dark comedies, raunchy comedies, slapstick comedies, to sophisticated comedies. What I mean is this…Bad Moms isn’t quite original in its gags and so might be “turned off” by bombardment of comedy angst. Personally, I didn’t bother me (I actually loved it). I’m just bring it up to my readers. Basically, if you like raunchy comedy movies, Bad Moms is right up your alley and you’ll probably laugh along with the movie. On the flip side, if you were looking for something witty or sophisticated then you might be a tad disappointed and a few chuckles shorts. It all just depends on what tickles your “funny bone”. For me, this film does.

Unfortunately, Bad Moms isn’t completely sharp and fresh as it wants to be. The movie invests more time in its premise and overall crazy R-rated jokes than it does at evolving story and character beyond what’s initial presented. This, of course, leads to the film be slightly predictable with a routine comedy formula over a film’s third act story arc. Characters are established, problems happen, and then everything works out in the end. Again, like what said about the movie’s comedy, I didn’t bother me so much as I didn’t expect the movie to be anything original and layered with well-rounded depth. I’m just point it out for you guys (the readers). However, what bothered me (a bit) was there they were some sub-plot story threads that didn’t completely pan out or were just dangling by the time the movie reached the end credits. It was like Lucas and Moore had some good ideas, but didn’t know where to go with them. In short, Bad Moms could’ve been something truly great, if only certain things were tweaked in its development.

What does sell movie (and its comedy) is the three protagonist moms in Bad Moms (i.e. Amy, Kiki, and Carla). Of the three, actress Mila Kunis is perhaps given the most to do, anchoring the film in its lead role as Amy Mitchell, a mom who reaches her “breaking point” and struggles to find her balance within your life. Kunis, known for her comedy roles as well as some drama ones, easily dishes out the lines in pleasant and sympathetic way, given her character the most compelling one in the movie (which is what the film intended to do). Kristen Bell and Kathryn Hahn follow behind her as the sheltered and fragile mother Kiki and the crass single mother (who’s been around the block) Carla respectfully. While both are, more or less, supportive caricatures incarnations, both Bell and Hahn do a good job in those roles, especially Hahn’s Carla who is hilarious. The three have great chemistry with one another and play off with each other’s role, acting as the mismatched misfits that are usually commonplace with comedy films. It doesn’t reach the hilarious trio of The Hangover’s “Wolfpack”, but the trio in Bad Moms is a fun bunch and sells in the movie’s notion of three distinct different moms out there.

Opposite the trio of Kunis, Bell, and Hahn is the more antagonist female trio belonging to Christina Applegate, Jada Pinkett Smith and Annie Mumolo with their characters of Gwendolyn, Stacy, and Vicky. Applegate’s Gwendolyn is the epitome of the classic over-zealous PTA moms out there and, while being a tad cliché, is great in performance with her demanding, but sugary-goodness persona. As for her mom minions, Mumolo’s Vicky gets a few laughs (with her character being a bit stupid for chuckles), while Jada Pinkett Smith’s Stacy is just there and not much to her character or for laughs.

Bad Moms’s supporting players are good in their roles, but, more often than not, they are simplistic caricatures rather than well-rounded minor characters. Amy’s two kids Dylan and Jane, played by Emjay Anthony and Oona Laurence (loved her in Southpaw), are good and have their moments being of Amy entitled and stress-ridden children. David Walton’s Mike, Amy’s stereotypical clueless / dopey husband, who, while funny in his bits, is a stereotypical and thinly sketched in the movie. The same goes for Jay Hernandez’s Jessie, the “hunky” and “dreamy” single dad, who has an attraction to Amy, but is just more of afterthought character for show. There are a couple of fun cameo roles throughout the movie, but the most interesting one comes in the form of pro-football player JJ Watt (Houston Texan’s Defensive End) as Coach Craig, a middle school soccer coach. I actually was the surprised to see #99 in Bad Moms (I found him to be funny) and was probably the only person who recognized him when I saw the movie in theaters. Basically, all these supporting characters (including the ones I didn’t mention) are in the movie for either comical relief or minor subplot devices or a combination of the two.

Mila Kunis experiences the mother-of-all “mom” breakdowns in the new movie Bad Moms. Directors Lucas and Moore craft a story that showcases the struggle of being a “mom” in today’s world with bountiful dosage of R-rated laughs and shenanigans along the way. Although the film isn’t made for everyone as the feature’s comedy has an acquired taste and the movie’s narrative isn’t exactly new nor original, following the standard trials and tribulations found in similar style comedies. To me, I liked this movie. It wasn’t exactly a “game changer” for the genre, but it still entertained me and kept me laughing throughout. Thus, I do personally recommend this movie, especially all the moms out there. However, it may not be for everyone. Will this movie be highly memorable as The Hangover or Jump 21 Street? Well, the jury is still out on that, but maybe. Nevertheless, Bad Moms is an enjoyable comedy with plenty of raunchy laughs, a great cast, fun cameo bits, and dash of parental sentimentality.