Back in 2015, female stand-up comedian Amy Schumer made her starring lead role debut in the comedy film Trainwreck. With the screenplay written by her and guided by well-known raunchy comedy director Judd Apatow, Trainwreck was a standout comedy film of 2015, especially in Schumer’s performance, which found her to be hilarious and heartbreaking as well as demonstrating the acting range. In addition, Schumer was surrounded by Trainwreck’s supporting cast members, including Bill Hader, Tilda Swinton, Colin Quinn, Brie Larson, and several others in either comedy and / or slightly comedy-drama performances. In the end, Trainwreck, while not an ultra-smash hit at the box office that year, did make its money back; grossing roughly $140 million against its production budget of $35 million. After Trainwreck, Schumer returned to stand-up comedy gigs, briefly making appearances on TV commercials and doing voicework in several animated television shows. Now, after two years, 20th Century Fox and director Jonathan Levine help bring comedian Amy Schumer back to the big screen with the movie Snatched. With a two-year gap between this movie and Trainwreck, does Schumer’s raunchy comedic timing still ring true or has the current moviegoer audience lost an interest in her?

Having been recently dumped by her musician boyfriend, Emily Middleton (Amy Schumer) is heartbroken, concerned about her upcoming trip to Ecuador the pair was just about to take. Unable to find anyone willing to go (with the vacation being non-refundable), Emily decides to ask her mother, Linda (Goldie Hawn), to come along for the adventure, doing her best to ignore her mom’s motherly quirks and overprotective nature. Arriving in paradise, Emily is quickly seduced by James (Tom Bateman), a British stranger who lures the single woman (and Linda) into a sense of trust and friendship, eventually serving them up to a local gang that hopes to make a profit off of their kidnapping. While Jeffery (Ike Barinholtz), her agoraphobic brother, tries to muster a rescue effort from home, Emily is left to hatch an escape with Linda, with the pair bumbling their way through the Amazon as the encounter various saviors, bad guys, and dim-wits in an attempt to reach the nearest American Embassy before they’re killed by their ruthless captors.

The movie Trainwreck was a film that I did review back in 2015 (giving it a 3.9 out of 5), finding it to be hilariously raunchy fun, but predictable. While I haven’t seeing much of her stand-up comedy acts, I did like Amy Schumer in the movie, proving to be a perfect fit in the movie’s lead role position and balance the R-rated comedy angst and some “rom-com” drama. Plus, the film’s well-known supporting cast was a big highlight for me to see (and like) the film. Thus, despite some problems here and there, Trainwreck was indeed a memorable hit for both Schumer and for its 2015 movie release. As for Snatched…I remember seeing the trailer for it many times when I went to the movies these past several months. Unfortunately, the film’s trailer didn’t leave a lasting impression on me as I kind of had a feeling that the movie was going to be pretty “meh”. However, I decided to take a chance and purchased a ticket to go see one lazy afternoon. What did I think of it? Well, let’s just say that my suspicions about this movie were correct as Snatched is an uninspiring comedy that’s short on laughs and story.

Snatched is directed by Jonathan Levine, whose previous works includes the films 50 / 50, Warm Bodies, and The Night Before.  As with those films I listed, Levine does know how to make a motion picture, finding its balance between comedy and drama within a regularly comedy feature. However, with Snatched, Levine seems to be struggling with the picture. Why? It’s because Snatched is (for the most part) completely bland and underwhelming. In a cinematic age when a lot of raunchy R-rated comedies are trying to get a viewer’s attention, Snatched, despite its attempts, just feels generic as there’s really nothing great, or new, or even original about the movie. Levine stages various things for the main characters of Emily and Linda to encounter and overcome, but the movie itself feels weak as if there’s little to no substance within its presentation. If I’m being truthfully, Snatched feels like a 97 minute SNL sketched comedy; something that might be funny on paper, but ends up being a bit “limp” when its fully executed. Even the film’s script, which was penned by Katie Dippold (the writer behind several Parks and Recreation episodes as well as the screenwriter for 2013’s The Heat and 2016’s Ghostbusters), feels pretty weak and lazy, following a series of commonplace troupes for the two main characters to follow. This, of course, makes Snatched very formulaic and less entertaining that what it wants to be. There’s even one particular scene (involving a CGI tapeworm that comes out of nowhere and feels completely unnecessary (and a bit disgusting and gross). In short, Snatched wants to be the next big comedy hit, but fails miserably from its uninteresting and predictable plot to its weak script. 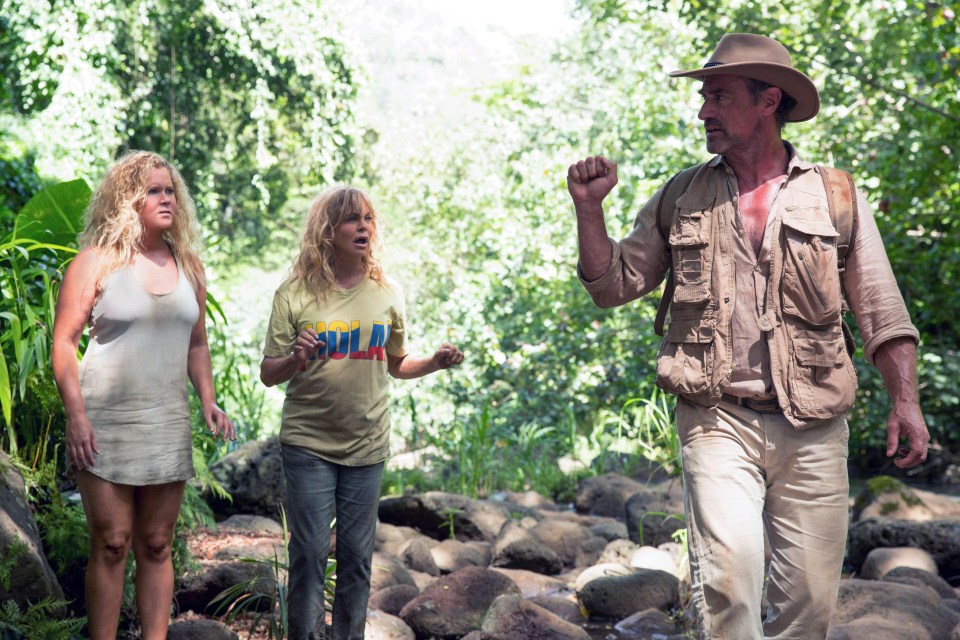 As for the production, Snatched does well (by industry standards) to match the level one would expect in R-rated comedy. Costumes, production designs camera work, and editing are all effectively good in their respective fields. That being said, there’s really nothing that stands out greatly beyond the usual. Although, I wasn’t expecting Snatched to be amazing with creative angles and clever cinematography, but, given the rest of the movie is pretty “blah”, I was expecting something more to catch my eye, especially since its story wasn’t that really engaging or exciting.

As one can imagine, Snatched’s biggest selling points (as well its marketing campaign) is the pairing of actresses Amy Schumer and Goldie Hawn together as mother / daughter Emily and Linda Middleton. Unfortunately, half of the duo is painfully bad, with Amy Schumer being that particular actress. Why? It’s just because she is in this movie? Her character of Emily, despite being one of the film’s main protagonist, has very little redeem qualities to her. That’s because Schumer plays the role in a bit of over-the-top and cartoon-ish way to a point of being ridiculous (even for an R-rated comedy feature). Speaking of comedy, Schumer’s raunchy style humor (of which she’s commonly known for), is bland in Snatched. There were a few one-liners that she says that were funny, but those were few and far between as those expecting some hilarious from her (like in Trainwreck) will be disappointing. Even the more serious moments of the feature were somewhat off-putting for Schumer to tackle. Naturally, as the film progresses, it becomes increasingly hard to care for Schumer’s Emily, which made me start to lose interest in the movie around the halfway point. So, while Schumer’s performance is woefully underwhelming, Hawn’s performance is much better. While widely well-known for her roles in Overboard, The First Wives Club, and Private Benjamin, Hawn makes Linda to be the straight character of the pair; always calm (a bit more collective) and has a better grasp of not freaking out in their variant situation predicaments. For most part, Hawn does good job in the role and, in contrast to Schumer’s acting, comes out as the better of the two.

The supporting cast of Snatched are the truly highlight of the feature and are probably the one of the redeem factors for this mediocre comedy picture. Perhaps the best example of this can be found in the character of Jeffery, Emily’s agoraphobic brother, who is played by Ike Barinholtz. Known for his comedy roles in Neighbors (and Neighbors 2), Sisters, and Suicide Squad, Barinholtz’s Jeffery, being lazy and co-dependent individual, is truly hilarious and his attempts to stage and rescue his mission to save his mom (his Ma Ma) and sister by harassing a US State Department employee Morgan Russell, who is played by actor Bashir Salahuddin (their constant back and forth interactions are indeed humorous)/ True, the character of Jeffery is not essential to the movie’s overall narrative, but, if this particular side-story is the highlight of the feature, then that’s saying something about the movie itself. Other noteworthy side characters in the movie include actors Randall Park as Emily’s recently ex-boyfriend Michael, Christopher Meloni as the bumbling expedition expert Roger Simmons, Wanda Sykes and Joan Cusack as the comedic pair Ruth and Barb (Cusack is especially funny as she doesn’t even speak in the entire movie), and lastly Tom Bateman (holy S**t that’s Giuliano from the TV show Da Vinci’s Demons) as the mysterious tall, dark, and handsome James. These roles, either funny or semi-important to the film’s narrative, are good in the respective roles and actually do trump (more often than not) Schumer and Hawn themselves in both comedic levity or interest level.

Schumer and Hawn journey to Ecuador and unwillingly partake in having a kidnap misadventure there in the movie Snatched. Director Jonathan Levine newest film pairs the unlikely actress together as a mother-daughter team up, finding their wacky adventure in the Amazonian jungles of South America amusing thanks to the film’s supporting cast as well Hawn’s performance. Unfortunately, the rest of the film is pretty bland from its weak script, to its formulaic narrative plot beats, and even from Schumer’s vanilla performance. To me, this was the pretty blah. Yes, there were some moments to be had and some minor laughs to chuckle over, but (as a whole) the feature was tedious, generic, and underwhelming. Thus, I would say that Snatched is definitely a “skip it” in my recommendations as there’s really not much value in spending the money to see in theaters or to buy it later on. In short, while it may be a good on paper to have Schumer and Hawn in a mother-daughter comedy film, the end result (Snatched) just falls flat. Let’s hope that Schumer can come up with something new that’s more like Trainwreck and less like Snatched in her next movie.

Snatched  is 97 minutes long and is rated R for crude sexual content, brief nudity, and language throughout