Who doesn’t love to laugh? The laughable (and bankable) takes on comedic levity as transcend itself on many different platforms from cartoon strips, to stand-up comedy, to television sitcoms, to quirky novels, and everything else in-between. As many would summarize, Hollywood (or rather motion pictures in general) is no strangers towards producing comedy feature films and with a variety of style to choose from, including dark comedies, quirk comedies, R-rated raunchy comedies, and so on. This film genre as even crossed over into other movie genres, including romantic comedies (rom-coms), action comedies, and even horror comedies. Now, as the 2017 movies continue to roll out, Pantelion Films (as well as Liongate) and director Ken Marino present the newest comedy endeavor with the film How to be a Latin Lover. Does this comedy find its “comedic” groove (and “Latin sex appeal”) or is it a generic and humorless feature?

Having the desire to become filthy rich with a desire of seducing woman with his Latin sex appeal (and libido), Maximo (Eugenio Derbez) marries Peggy (Renee Taylor), a wealthy rich older woman who is twice his age. Twenty-five years later, spoiled and bored from pleasing his now 80-year old wife, Maximo gets a sudden surprise when he finds out that Peggy ends up dumping him for a younger man. Forced out of Peggy’s mansion and stripped of his lifestyle privileges, Maximo desperately is looking for a place to stay, ending up on the apartment doorstep of his estranged sister, Sara (Salma Hayek) and her awkwardly nerdy son, Hugo (Raphael Alejandro). Anxious to return to his life of luxury and wealth, Maximo uses his nephew’s crush on a fellow classmate named Arden (McKenna Grace) to get to Arden’s grandmother, Celeste (Raquel Welch), widowed billionaire. As Maximo attempts to rekindle his sexual appeal as a Latin lover, he finds himself strangely grow fond of bonding with his sister and nephew, conflicted about the life that he had to the one he’s now a part of.

After action, fantasy, and animation, the film genre of comedy would be my next favorite choice of movie styles. I do like to laugh a lot (I find it good for the soul), so I usually like to enjoy a good comedy movie and (for the sake of garden variety) maybe even a few bad ones from time to time. For the most part, I like the R-rated raunchy comedies, with recent favorites being Sisters and Office Christmas Party. As for this review of How to be a Latin Lover, I don’t remember hearing any sort of “buzz” about this movie online. I first heard about this movie when I saw the trailer for it when I went to see (in theaters) either Power Rangers or CHiPs (I can’t remember). Judging from the trailer’s premise, I was sort of intrigued to see this film when it came out, with the trailers showcasing humorous bits and with several recognizable faces (actors) that peaked my interest. I did see it’s opening weekend release, but my review for How to be Latin Lover sort of fell through the cracks…until now. So, what did I think of it? Well, despite its attempts, How to be a Latin Lover just plays out in a standard comedy movie. It’s not really bad, but it’s just a passable comedy film.

How to be a Latin Lover (I’m just going to shorten it to Latin Lover for most of this review) is directed by Ken Marino, who known for his acting roles in TV shows like Children Hospital, Marry Me, and Burning Love as well as directing several TV episodes. Latin Lover makes Marino’s first theatrical film debut as director and he does a decent job in that endeavor. For the most part, Marino stages the movie to be like Adam Sandler / Happy Madison film, with plenty of slapstick humor that’s peppered with some recognizable faces. Although, despite Sandler’s recent film endeavors, Latin Lover is handled a bit better. Also, Marino does the traditional storytelling arc of finding an underling message of family and “what really matters” within the character of Maximo. This tactic has become a staple of these styles of comedy film, which can be either good or bad. To me, it’s a good use in Latin Lover’s narrative. In terms of moviemaking, Latin Lover is presented in a standard way. This means that from production quality (set designs, costumes, camera angles, etc.) to music (the score composed by Craig Wedren) and editing are all presented in a favorable way that is met to industry standard for a comedy feature.

Problems to arise quickly within the movie, making Latin Lover a more mediocre comedy endeavor than what it wants to be. For starters, the film’s comedy is a mixed bag of sorts. Sure, there are some funny bits that made me laugh, but, for the most part, its various jokes and gags (both either slapstick physical or dialogue driven) miss their mark or just simply fall flat, with only a handful of viewers finding humor within its more meekly attempts at finding laughs. Basically, think of the film’s comedy as something similar to an Adam Sandler movie. It’s not really fresh or innovated comedy, but has its moments of comedic levity that is presented in that PG-13 style that a Sandler’s movie. Thus, this point, whether positive or negative, will ultimately depends on what “tickles your funny bone”. Personally, I’m spilt as I said, some parts made me laugh, but Latin Lover’s comedy was more miss than hit.

With the film’s screenplay written by Chris Spain and Jon Zack, perhaps the most negative point I have about Latin Lover is within its predictable (almost formulaic) narrative plot progression. As with a lot of comedy films of this nature, the film recycles a lot of the familiar / commonplace plot points and narrative progression. From almost start to finish, Latin Lover’s story seems very familiar, drawing a parallel to 2016’s The Boss, starring Melissa McCarthy. If you stop to think about, it real does follow (almost verbatim) the plot of The Boss (i.e. a rise to fame and well-content lifestyle, which then gets shot down and brings the main character to the bottom as he then tries to reclaim his / her title; only to find what really matters in the end). While I did like The Boss, it was presented with a slightly better presentation as Latin Lover, which seems a bit subpar in its storytelling. Plus, in the end, Maximo sort of learns his lesson, but (then again) he sort of doesn’t it, which contradicts the whole movie’s message. Maybe it’s just me, but that’s what I took away from the film. Thus, this, plus the film’s mixed comedy, makes Latin Lover a generic comedy film.

Of course, the big highlight of Latin Lover is for the introduction of actor Eugenio Derbez to US moviegoer audiences. Derbez, most known to be a recognizable actor in the Latin America community, has also been spotted on such movies like Miracles from Heaven and most recently in Sandy Wexler. Personally, this was my first time seeing Derbez in an acting role and (to me) he actually did a pretty good job, playing up the character of Maximo as goofy / buffoon-ish protagonist, who’s mostly the butt of the film’s joking gags. He definitely does have that on-screen presence (his natural charisma leading his credibility), making him a likeable actor and (by extension) his character. Thus, while the comedy’s substance is subpar for the film and the story’s narrative is a bit recycled of past ideas, Eugenio Derbez does shine bright in the role of Maximo.

The film’s supporting cast also does help aid credence to Latin Lover’s positive strengths. The beautiful (and almost ageless) actress Salma Hayek plays Maximo’s sister Sara. Hayek (sometimes mistakenly confused with Penelope Cruz), known for her roles in Frida, Desperado, and Once Upon a Time in Mexico, does a great job in her role, especially when she shares scenes with Derbez’s Maximo. The only then I didn’t like about her character (not so much on the part of Hayek’s performance) is her side storyline with her relationship with the character James, played by actor Mather Zickel. This side-story feels unnecessary and really doesn’t go anywhere and sort of feels unresolved by the time the film’s end.

Actor Rob Lowe, known for his roles in Parks and Recreation, Brothers & Sisters, and West Wing, plays the character of Rick, Maximo’s fellow gigolo comrade. Lowe does prove that he has the talents to hit all the comedic beats and does bring a lot of the film’s behind Derbez. Actress Kristen Bell, known for her roles in Veronica Mars, Forgetting Sarah Marshall, and Frozen, plays the character of Cindy, a lonely oddball-ish single woman. Bell’s performance is fine (nothing grand), but her character inclusion in the story just seems a bit incomplete. I know the character of Cindy has particular message plot point for Maximo to learn, but her place at the end of the movie just unfinished, making her character a bit underwhelming (in the movie’s grand scheme of things). Of the younger members of the cast, Raphael Alejandro and Gifted star McKenna Grace does some great work in their respective roles as Hugo and Arden.

The rest of the film’s cast are delegated to small roles in the movie (a bit of cliché of sorts), but, with most been recognizable from other projects, their inclusions are a welcomed one. This includes Linda Lavin as Millicent (Rick’s old but wealthy mistress), Raquel Welch as Celeste Birch (Maximo’s newest target), Renee Taylor as Peggy (Maximo’s rich mistress), Michael Cera as Remy (Peggy’s newest lover), Rob Corddry as Quincy (Celeste’s chauffeur), and Rob Riggle and Rob Huebel as pair of muscle meatheads (Scott and Nick) who crosses path with Maximo over their monetary payment that they are owed. Lastly, “Weird Al” Yankovic does make cameo-like appearance, playing himself in the movie. 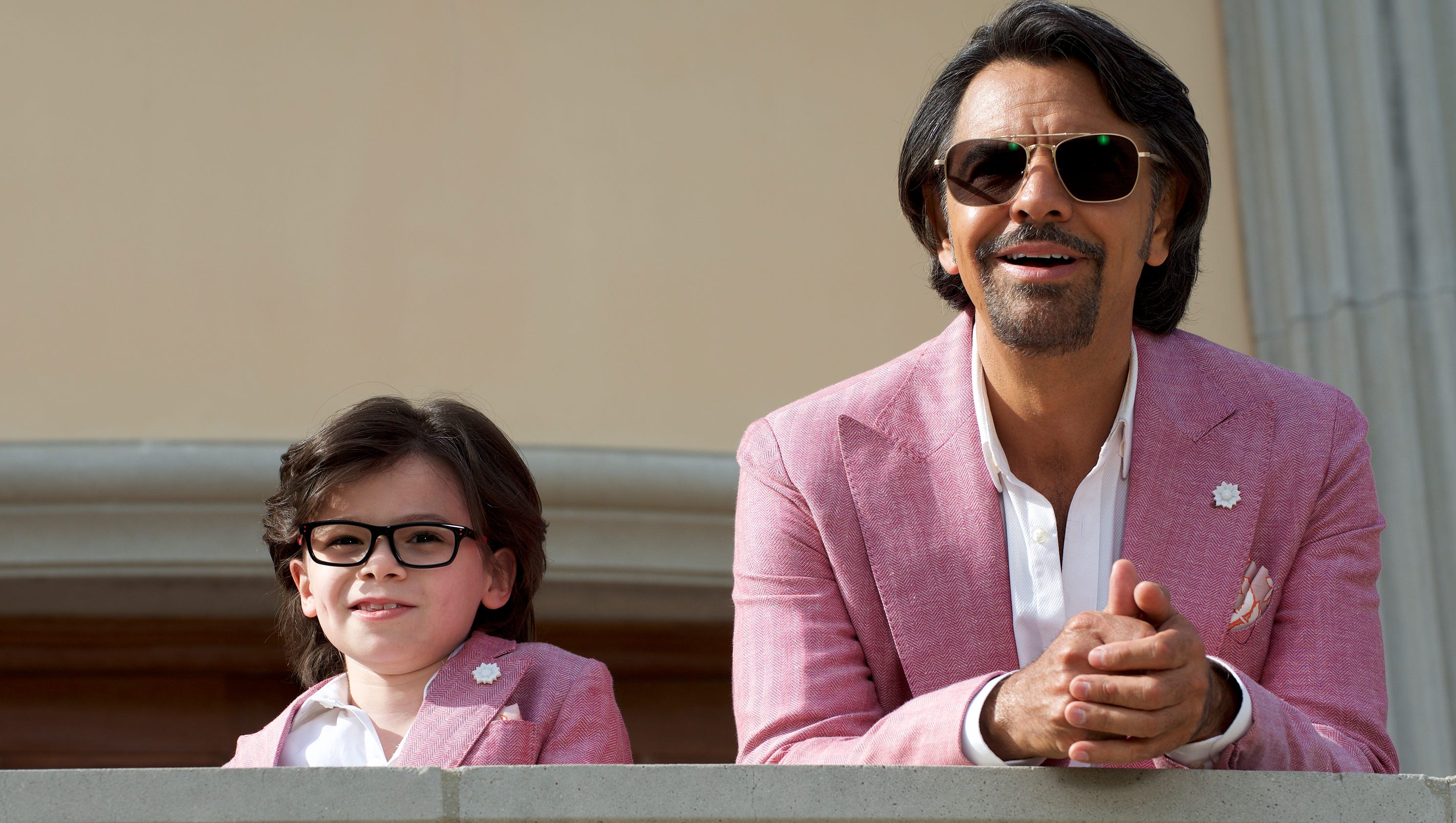 One gets what they work for, not what they wish for” is the underlining message echoed in the movie How to Be a Latin Lover. Director Ken Marino’s first theatrical film does have fun premise, showcasing the acting talents of Eugenio Derbez as well as several others of the main principal cast. Unfortunately, with a formulaic narrative and its hit or miss comedy gags, How to Be a Latin Lover only works on at certain times, elevating itself slightly above today’s average comedy features, but doesn’t allow it to be memorable. Personally, I thought this was somewhere between an okay and good movie. While it may not be original nor uproariously funny, the movie’s premise and colorful cast do have some entertainment value (depending on a viewer’s perception). Thus, I would give an iffy choice or maybe even a passable rental movie to see once. While actor Eugenio Derbez is a talented actor and does have the comedic chops, he just needs a slightly better film than How to Be a Latin Lover; a mildly passable comedy endeavor.

How to be a Latin Lover  is 115 minutes is rated PG-13 for crude humor, sexual references and gestures, and for brief nudity