THE HEART (AND COURAGE)

There isn’t anyone alive who can say that haven’t been (in some way shape or form) touched by cancer. In the cinematic world, this life-altering disease has played a part in narrative storytelling, utilizing the element of cancer (in a person) to invoke a somber / emotional character development arc, drumming up sympathy within a character, those around the character, and delivering a profound (and touching) story arc hook. In the real world, however, the moviemaking gloss of acting and of storytelling is met with a much harsher reality. Sure, the resulting factors of a person enduring such a life-stricken disease are the same in a film, but the reality of it all happening in real life is much more palpable, facing a multitude perilous trials and tribulations of the combatting the nature of the disease. While some do preserve and as they say “beat cancer”, the disease is, more often than not, mortally fatal to the individual, which prompts one think to about one’s own life coming to an end (the finality of it all). And yet, despite all that, the unwavering power of determination and inspiration sometimes blossoms within a person’s darkest hour, such is the case with actor Andy Whitfield in the documentary film Be Here Now. 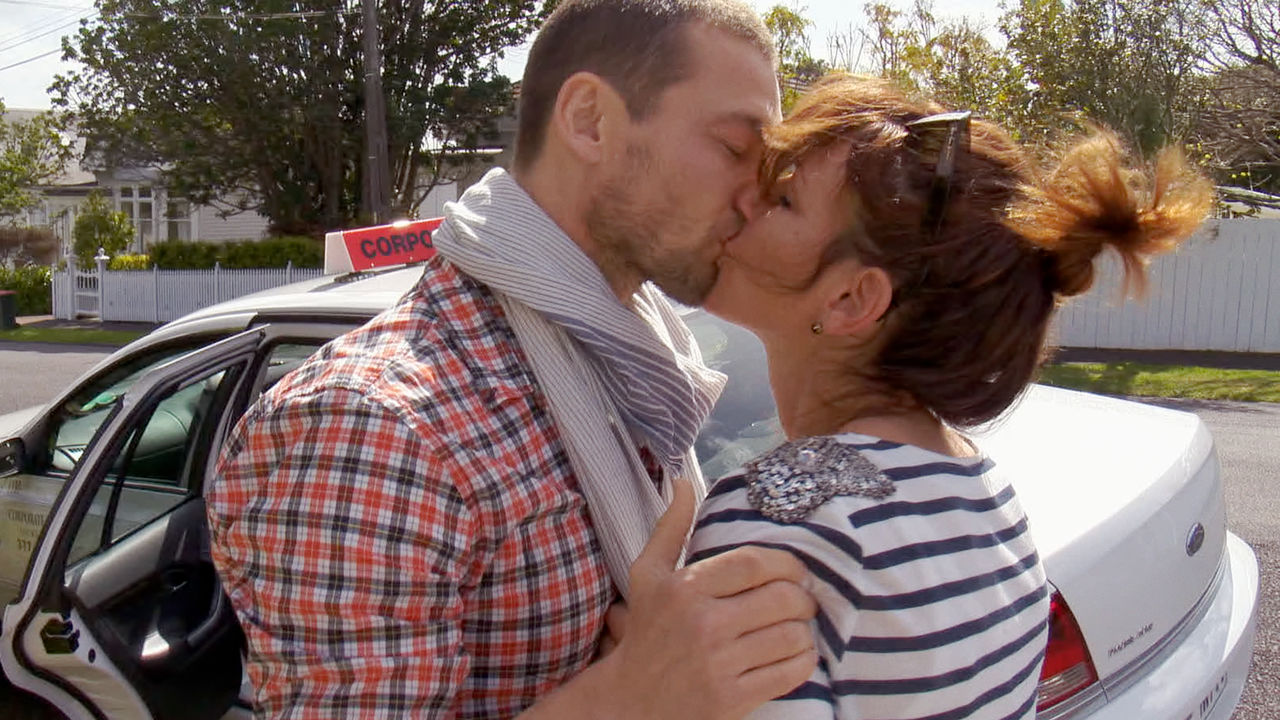 As I said above, cancer has touched most (if not all) of our lives, either being diagnosed with the fatal disease or knowing someone who has. Personally, I had two family members that passed away due to cancer (and a third who had breast cancer), so, while I’ve never had cancer (hopefully I never do) I’ve known its “deathly touch” and the effects / toll it takes one loved ones. While back I posted the trailer for Be Here Now and expressed an interest in seeing it (and reviewing it) for my blog, especially since I was a big fan of Whitfield’s performance in Spartacus. Unfortunately, this documentary was being shown in limited screens (across the country) and I was unable to view it for quite some time…that was until I went on vacation to Costa Rica. I was flipping through Netflix one night and I came across. I was super shocked that they had it on Netflix, so I quickly clicked on it and watched it. This review is gonna be a different from my previous reviews and a first for me as I’ve never reviewed a documentary film before. So here it goes….

For those who don’t know who he was, Andy Whitefield was a model turned actor, who, like many aspiring actors out there, was looking for his “big break” in his career. A chance opportunity came knocking on his door when he auditioned and won the lead role Starz original drama series Spartacus, a dramatized version of the historical gladiator Spartacus that led a rebellion against the Romans Fashioned in the style similar to Zack Snyder’s 300 (chiseled muscular men and brutal battles with CG blood), Spartacus (season one was titled Spartacus: Blood and Sand) was massive success for Starz, which prompted the network to greenlit a second season. Unfortunately, at the end of the first season, Andy Whitfield was diagnosed with Non-Hodgkin lymphoma in March 2010. While Whitfield immediately began to undergo treatment as Starz delayed season two of Spartacus (Spartacus: Vengeance). With news of his recovery and almost cancer free, Starz produced a six-part episode prequel (Spartacus: Gods of the Arena) as they waited for Whitfield to return.

Unfortunately, while his cancer was in remission and was on the cusp of starting Spartacus: Vengeance as well as gearing up for the next stage of his acting career, a recent checkup (recommended by Starz before he started shooting) showed that his cancer had relapsed in September 2010, which prompted Andy Whitfield to bow out of the role of Spartacus for the show. And this is where the documentary begins. As a side-note, Australian actor Liam McIntyre was Whitfield’s successor as Spartacus on the show, playing the title character for the rest of the series (see Spartacus: Vengeance and Spartacus: War of the Damned). Additionally, if you don’t know, Andy Whitfield did lose his battle with cancer and passed away in September 2011.

Directed by Lilibet Foster, whose previous works includes directing other documentaries films like Remembering Marshall: Thirty Years Later, A Patriot Act, and Brotherhood, Be Here Now follows his Andy Whitfield, along with his wife Vashti and their two young children (Jesse and Indigo), and how he must combat his recent relapse of cancer, balancing his health, his mind, and his family as he undergoes one treatment after another (i.e. from spiritual “cleansing” treatment to acupuncture to chemotherapy to heavy dosage of radiation). Personally, this was such a powerful documentary film to watch and to sit through. As to be expected, Be Here Now shows the various stages that Andy must undergo in his attempt to rid his body of cancer altogether. What’s remarkable about what Be Here Now shows is how much Andy has a positive and optimistic outlook on this life-altering predicament. Sure, he’s not jumping up and down filled with joy, but instead of letting himself be overcome with grief and sadness, Andy press forward, displaying a confident and positive disposition of battling through his cancer. To me, that’s quite inspirational as I could never be that brave as he was.

As one can imagine, Be Here Now is emotionally raw as neither Foster nor the actual documentary story being told is sugar-coated in anyway. This is about cancer and how one’s man must combat it and ultimately deal with the possible outcome of dying because of it. Nothing staged, nothing is pre-written script, it’s just real-life emotions during a horrific time period in a man’s life. If I’m being honest, that’s what saddens me the most about this documentary. Here’s Andy, a very handsome and good-looking man who just got his big break as an actor with a potential promising future in acting, gets the rug pull underneath him as he’s diagnosed with cancer, which ultimately does consume him. I was fan of the show Spartacus and of Andy Whitfield’s performance in the lead role and I was grievously saddened to hear that he had to bow out of the show because of his cancer relapse. I continued to watch the show and, despite the Liam McIntyre did a great job in feeling Whitfield’s role as Spartacus, I sure did miss Andy as the main protagonist.

It’s such a tragedy hear about and to actually see it unfold in this documentary (seeing Andy essentially in great shape at the beginning of the film and then seeing him progressively get much thinner and gaunt-looking). It’s just heartbreaking and definitely an emotionally rollercoaster. Even the most cynical person or critical movie reviewers (those who might view Be Here Now as being too long or too “formlessness” in its presentation), you simply cannot deny the true inspiration (almost awe-inspiring) positive resilience that Andy faces head one as his disease (and bad news) continues to progress.

As one can imagine, Be Here Now is emotionally raw as neither Foster nor the actual documentary story being told is sugar-coated in anyway. This is about cancer and how one’s man must combat it and ultimately deal with the possible outcome of dying because of it. Nothing staged, nothing is pre-acted, it’s just real-life emotions during a horrific time period in a man’s life. Yet, the camera never feels intrusive into what’s happening on-screen (whether humble or darkened moments), presenting a very private (almost intimate) look into Andy’s life as well as his family. If I’m being honest, that’s what saddens me the most about this documentary. Here’s Andy, a very handsome and good-looking man who just got his big break as an actor with a potential promising future in acting, gets the rug pull underneath him as he’s diagnosed with cancer, which ultimately does consume him. It’s such a tragedy hear about and to actually see it unfold in this documentary (seeing Andy essentially in great shape at the beginning of the film and then seeing him progressively get much thinner and gaunt-looking). It’s just heartbreaking and definitely an emotionally rollercoaster.

Be Here Now also showcases Andy and Vashti’s personal lives, with the pair sharing their childhood memories as well as how the pair met and ultimately god married. This, of course, was quite an interesting part of the documentary, further showing the intimate and private life of Andy and his family. As one can imagine, Vashti is just like any loving wife whose partner been diagnose with cancer. She loves and carries for Andy, but shows the emotional weight behind seeing her husband treatment and cancer progression, portraying a very realistic (and human) range of emotion from love, anger, support, honesty, hopelessness, and hope. Juxtaposition to her, Andy, despite his tumultuous treatment and slowly succumbing to the disease, he’s shown as a family man, spending time with his wife and two children, which is quite inspirational and definitely shows him as a humble human being.

Though many might have not known Andy Whitfield in his acting career (I do highly recommend you seeing him in Spartacus: Blood and Sand), Be Here Now is a remarkable story of one man’s final journey and he, in the face of death, defines his last part of his life with determination, optimism, and a loving family man to his wife and kids. A special thanks to all who were involved in making this documentary come to life, especially big thanks to the Whitfield for showing the very tragic and private portion of their lives. Personally, I loved this documentary. Yes, I did definitely tear up at various points, but it was because how powerfully moving Andy’s journey was and how optimistically steadfast he was during such a horrific time period Thus, I would highly recommend this documentary to everyone, especially fans of the show Spartacus. Sure, it’s not really a “happy ending” sort of documentary film, but Be Here Now express how one must live in the moment (in the present) and to enjoy life, despite the overwhelming odds that one might face. In short, Be Here Now is a testament of the human spirit and how Andy Whitfield found a humble glimmer of light on his dark journey with cancer. I guess all I have left to say is this…. rest in peace Mr. Whitfield…you truly had the heart and courage of champion.