THE BOSS BABY IS ON “POOP” DUTY

2016 saw a lot of animated films being released. From Disney’s mega hits Zootopia and Moana, to Pixar’s touching sequel Finding Dory, to Illumination Entertainment’s colorful flicks in The Secret Life of Pets and Sing, to Laika Entertainment critically acclaimed film Kubo and the Two strings, 2016 was a big year for cartoon feature films. In amongst those films (and some other bad ones…. The Wild Life) was DreamWorks Animation two releases that sort of bookended the year, with Kung Fu Panda 3 released in January and Trolls in November. As many know, DreamWorks is sort of a cautionary tale of a once powerhouse animation studio that has become “the old dinosaur” in animation. Sure, Disney has been around way longer, but Disney’s has also seemed to found its groove back of late, finding its signature “mojo”, while DreamWorks seems to be more a “hit or miss” or rather more misses than hits. However, Kung Fu Panda 3 and Trolls were met with praise from critics (and fans) as well as box office success, so studio seems to be on the right course. But for how long? A question like that is about to answer as director Tom McGrath presents the DreamWorks newest film of the 2017 year with the movie The Boss Baby. Does DreamWorks 34th animated tale shine bright or is it a flat and generic dud cartoon endeavor?

Timothy Templeton (Miles Bakshi) is a 7-year old kid with a wild imagination and living the dream. As an only child, he receives the full and undivided attention of his two loving parents Ted (Jimmy Kimmel) and Janice (Lisa Kudrow). Yes, Tim receives the caring love from both from them, including a touching bedtime routine of three stories, five hugs, and one special song. However, Tim’s reality is suddenly shattered and gets turned upside down with the arrival of a new baby brother. Immediately, his parents become completely infatuated with the baby’s cuteness and his demands, which draws attention away from Tim and causing the 7-year old to grow jealous as well as growing suspicious of his suit-wearing, briefcase-carrying sibling. Trying to discover the truth behind the Templeton’s newest addition, Tim is startled to learn that the baby can talk like a fully-grown adult (Alec Baldwin), who is conducting business on a secret mission. Introducing himself as the “Boss Baby”, Tim’s brother reveals he was sent from Baby Corp, (a secretive place where those certain babies who don’t fit into the standard newborn profile…to become part of “Management”) to stop the launch of a new product from Puppy Co, which would severely limit the amount of love in the world for babies and for babies in general. Tim agrees to help Boss Baby in his quest, so the baby can receive a top-notch promotion at his job, while Tim’s life can be restored back to normal.

As I stated in some of my previous reviews, I’m a huge fan of animated films from G-rated kid friendly films to more gravitas or more mature ones (like anime). 2016 saw an impressive number of successful animated features within its 12-month span. Even two animated movies (Zootopia and Moana) made it on my Top 10 list of Best Movies of 2016. So yeah, in the arena of movies of remakes, blockbusters, horror flicks, and page-to-screen adaptations, the genre of animation is still as strong (and ever present) as ever. As for DreamWorks, 2016 was kind to them, producing two movies that were actually pretty good (a much improvement from their 2015 release Home). Even fans and critics were pleased with both films as Kung Fu Panda 3 scored $521 million at the box office, while Trolls racked in $345 million. So, while the company has had some mediocre projects in the past, it seemed that DreamWorks is on the right path.

This, of course, leads me to their newest film The Boss Baby. I remember first hearing about the movie when I saw the film’s trailers, which (to me) weren’t a bit unimpressive, especially since other 2017 animated movies (i.e. Cars 3, Coco, and Despicable Me 3) look more promising. Still, I had faith that DreamWorks, despite their “hit or miss” of recent features, can dust off their “old magic” and interject them into their newest films (much like Kung Fu Panda 3). So…what did I think of DreamWorks newest film? Well, it’s not good, finding The Boss Baby, despite an important lesson and some visual flair, the movie just doesn’t rise to the challenge and ultimately feeling haphazard and generic from start to finish.

The Boss Baby is directed by Tom McGrath, who previous work includes several DreamWorks other films, including all three of the Madagascar movies as well as Megamind. Since he’s well-versed in DreamWorks films, McGrath knows of how to craft a kid animated movie, finding its creative angle in capturing the joyous spirit of being a kid that goes on in Tim’s head, which is presented in the film throughout the film and runs through the childhood heel of pretend imagination from being a ninja to a pirate. Overall the film’s animation is unique. No, it’s not something that won’t beat out Moana’s lush animation, but it has its own charm (something that kind of reminds of 1950s style from old TV sitcoms).  In addition, there’s a couple of fun sequences to watch, including a backyard “car chase” that add some entertainment and eye-catching value throughout the film.

Aiding McGrath is the film’s screenwriter Michael McCullers, who translates Marla Frazee’s children book (Yes, Boss Baby is based on a picture book) into a full length animated feature. McCullers plays up some interesting gags, especially with Boss Baby’s corporate lackey (each one is funny and probably could’ve had more time on-screen). In addition, the film’s comedy bits have its moments. Some land on their feet (poking fun at babies, business world, and one or two Elvis Presley gags), while some just land a bit awkwardly with maybe only a few chuckles. At its core, The Boss Baby does have wholesome message about siblings and their overall rivalry / compassionate love for one another. 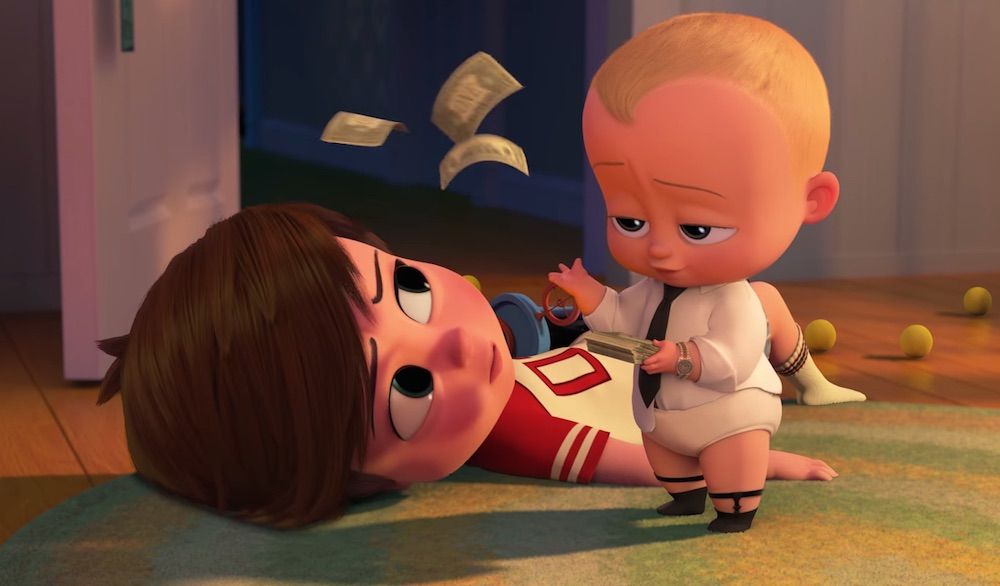 Unfortunately, The Boss Baby is riddled with problems as the movie doesn’t rise beyond being mediocre. First and foremost, the entire movie just feels generic and underwhelming. Maybe because we (the viewers) have been treated with higher quality of animated films (see Zootopia, Moana, and Kubo and the Two Strings), but The Boss Baby just feels (as a whole) a bit lazy work from the studio, especially since this studio as produced such memorable features like the Kung Fu Panda movies and the How to Train Your Dragon films. Yes, the movie’s plot is a bit simplistic and there are some fun elements that McGrath and McCullers explored throughout the film (i.e. the reason why babies never grow up and their corporate “management” hierarchy” world), but there’s no subtext and the whole movie just comes off as being very predictable and almost formulaic in its narrative path. In addition, the movie has a lot of bizarre concepts within its narration (a war between babies and puppies seems a bit silly…. even for a kid’s film). While the first act of the film is pretty good, the second and third act is where the movie starts to lose steam and becomes more loud and random as if McGrath is just throwing things at the “storyboard” wall (trying to see if it sticks or not). Also, the film’s ending seems way too long. I know it’s supposed to be a somewhat a poignant scene, but it really just drags out, trying too hard to tug at a person’s emotional heartstrings. This is strange notion because the film does move at a brisk pace, so it just seems odd. All of this (plus a few more sub-contents negative criticism) makes The Boss Baby feels like a mediocre feature in comparison to some recent animation hits. Personally, most of the film is pretty unmemorable (and that’s not a good thing).

Primarily, The Boss Baby places its camera lens focused on the two main leads, keeping the characters of Tim and the Templeton’s newest suit-wearing addition in the film’s spotlight. It’s clear that of the two leads that Alec Baldwin is the star of the feature. Given the scenes from the film’s promotional material, Baldwin, known for his roles in The Hunt for the Red October, The Departed, and Pearl Harbor, does impressive work as “baby business man” (aka Boss Baby), rifting his fast-talking / wheeling-dealing Jack Donaghy persona from the TV show 30 Rock. Personally, I think it’s a great fit and probably one of the best attributes that the animated film has to offer, finding Baldwin comfortable (as well entertaining) in the role. Behind Baldwin, Miles Bakshi anchors the film as the youthful Tim, lending his voice to the character and demonstrating enough energy and dramatic pose to fulfill the role. All in all, both find their groove and play off one another perfectly as the movie finds the two against each other as well as bonding towards the latter.

Unfortunately, while Baldwin and Bakshi have strong representation in the movie, The Boss Baby’s supporting cast isn’t so lucky. The main reason for that is due to the face the movie mainly focuses on relationship between Tim and his new baby brother, making the supporting players of the film feels less important. Rest assured, there still present in the movie, but just not as impactful and are merely in background (for most scenes). Comedian actor and late night show host Jimmy Kimmel and actress Lisa Kudrow (known for her role on the once popular TV show Friends) play the fairly standard parents found in animated movies, playing Ted and Janice Templeton in loving and caring way, but are clueless to what’s really going on. Steve Buscemi, known for his role in Boardwalk Empire, as a small role as Puppy Co. CEO Francis Francis. His voice work is good, but he’s isn’t given much to do and becomes a flat note side character. The only other secondary character worth mentioning is Tobey Maguire, who voices adult Tim as narrator to the film. Even though his part his small, Maguire seems to project his own natural charm and humor into the movie.

It’s a sibling rivalry between Tim Templeton and his new baby brother in DreamWorks animated film The Boss Baby. Director Tom McGrath newest film is nothing revolutionary, but still is slightly elevated due to its visual flair, Baldwin’s voice talent, and a fundamental message. Unfortunately, the movie just lacks any form of innovation to make it stand-out from the other recent animated features. From stretching a simplistic script (meant for a cartoon short) to overstuffing the plot with some strange narrative elements, to an elongated ending, it’s clear that the movie doesn’t know what it wants to be, never landing a signature staple or memorable moment within its entirety. To me, it was pretty “meh” of a film. Yes, there are some fun comedy nuances and a meaningful message to learn, but the movie just feels generic (plain and simple). Basically, another dud from DreamWorks. Of course, the juice box crowed (ages 8 and under) will probably like some of the wacky scenarios that the movie produces, but, for everyone else, it’s probably best to skip this movie (my recommendation). It’s nowhere near DreamWorks’s best, but neither is it their absolute worst (though it leans more towards the bottom half of the studio’s animated feature). Hopefully the animation studio will find fair better with its other 2017 movie Captain Underpants: The First Epic Movie.