THE UNSUNG WOMEN OF NASA

The history of NASA is filled with bountiful stories of men and women who served for the greater good in launch astronauts into space. From the Challenger missions to the Apollo missions (the moon landing in Apollo 11 and the infamous Apollo 13) to the formation of the International Space Station in 1998, NASA has had an illustrious history in being a leader in the world’s space expedition. Of course, many will know of the famous “Space Race” that the United States and Russia faced from 1957-1975. However, many don’t know of the tale of the three NASA women (during the 1960s) and how they establish themselves and succeed in become important figures within the National Aeronautics and Space Administration. Now, 20th Century Fox and director Theodore Melfi present that particular untold story in the film Hidden Figures. Does this movie finds the right trajectory or does it miss it mark completely? 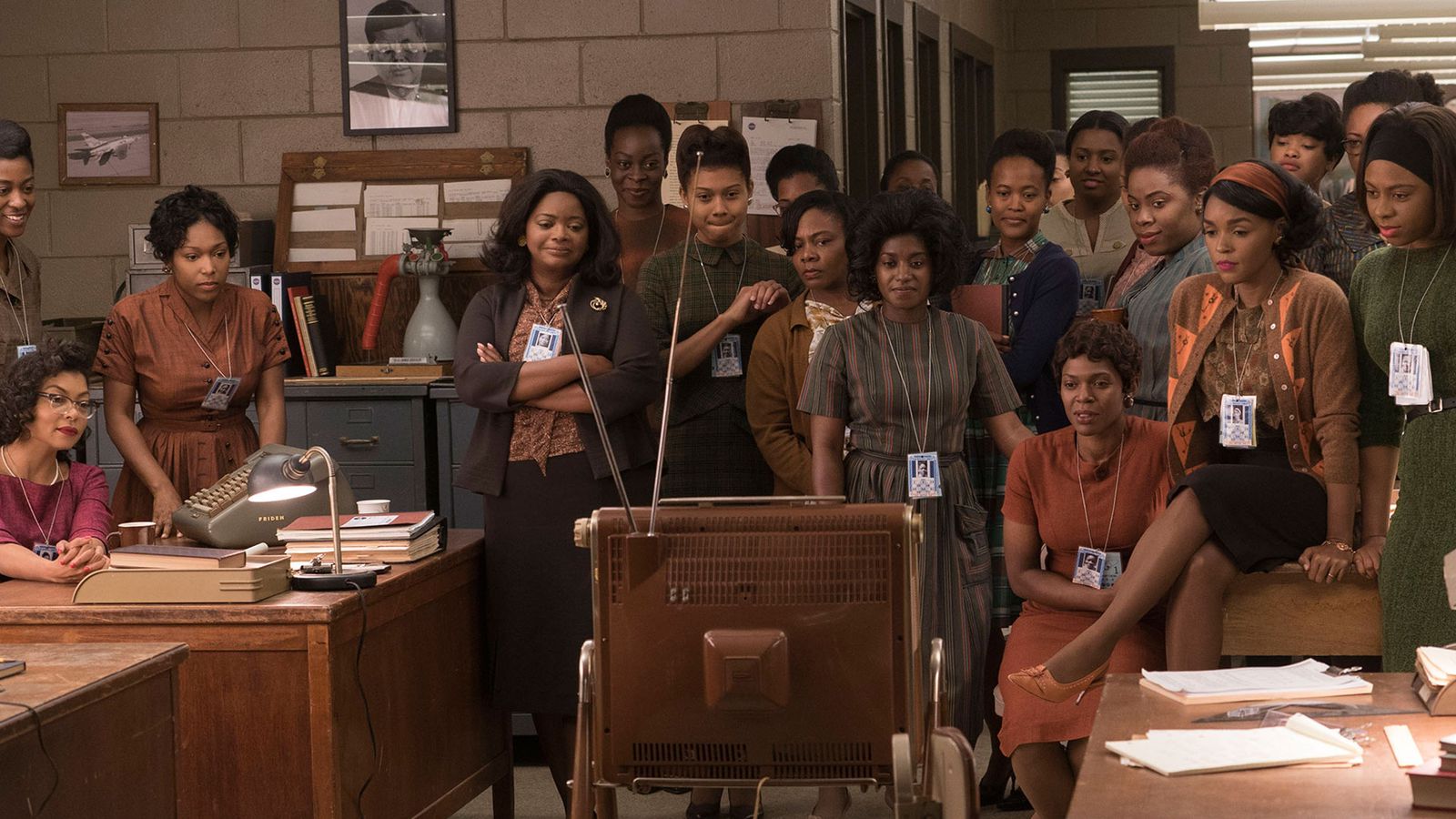 In 1961, Katherine G. Johnsons (Taraji P. Henson), Dorothy Vaughan (Octavia Spencer), and Mary Jackson (Janelle Monae) are three African American women working at NASA, doing their best with unsatisfying roles and struggling to manage the time period’s commonplace bigotry towards their race and gender. With paranoia of sweeping across the nation after the Russians manage to launch a satellite into Earth’s orbit, NASA quickly hastens their plans for spaceflight, with Al Harrison (Kevin Costner), the director of the Space Task Group, in charge of protecting the astronauts from launch to re-entry, working out the math and science of the mission. Bringing in Katherine to act as a “human” computer to check over the numbers correctly, Al discovers her brilliant and resource mind, but, despite her talented intellect, is faced with office prejudice and fighting to be heard with her colleagues, including Paul Stafford (Jim Parsons), who seems to undermine and question Katherine’s work. As marches forward, astronaut John Glenn (Glen Powell) is about to undertake the “Friendship 7” mission, which prompts Al’s team to do the math and find the answers, and prompts Katherine to stand up for what she believes in and proves his worthy to the everyone; a sentiment that rings true for Dorothy and Mary, who fight their own personal battles at NASA.

Like many times before with movies that I review, I constantly saw the trailer for Hidden Figures every time I went to my local movie theater (during the 20 minute previews that they show). This, of course, made me interested in seeing the movie. I actually saw this movie a week after it came out in theaters (on January 13th, 2017), but I kept on pushing doing this review because of other films that were coming out (I fell a bit behind on doing movie reviews and it started to pile up). Now, sense I have time, I’m starting to play “catchup”, which brings me into doing my review for Hidden Figures. So…. what did think of the film? Well, I liked it. Despite some minor problems, Hidden Figures is one of the movies that delivers on its premise, producing an inspirational film that succeeds on being informative as well as being thoughtful entertaining.

Based on the book of the same name by Margot Lee Shetterly, Hidden Figures is directed by Theodore Melfi, who previous work includes several short films like Roshambo and I want Candy as well as the feature film St. Vincent. The film’s script, which is penned by Allison Schroeder as well as Melfi, flows correctly, framing the journey of the three main protagonists in a thoughtful and respectable way, while juxtaposing the time period’s major events and the prejudice world that these women lived in on multiple fronts (i.e. scientific and social circles). What also helps is that Melfi makes the film more entertaining than most “based on a true story”, even though the film sort does follow the all-too well trodden path of these times of films (i.e. through setbacks and victories). Naturally, the film historical depiction of racial segregation / prejudice is handled well (not too heavy, not too light), but just enough to get its point across and leaves and impressionable statement of the three women’s journey through such difficult times by their gender and color. Of course, the film does help shine the light on such a “unknown” story on NASA’s history, so it sort of counterbalances it all, making Hidden Figures vaguely familiar in the storytelling presentation, but poignant (as well as entertaining) in the story it wants to tell.

In terms of production, Hidden Figures excels in almost all areas, making its 1960s-historical setting believable and quality made, even though most of it is in the film’s background. Cinematographer Mandy Walker does a good job in visually blending actual film footage and archival footage from the decade as well as capturing the stylish 60s costumes design from catchy dress and suits from the men and women of that era, thanks to the movie’s costume designer Renee Ehrlich Kalfus. In addition, like many films that are set in a particular time period, Hidden Figures establishes a strong presence in the time period’s music, a wide range of 60s classic pop tunes to original music (including the very catchy song “Runnin” by Pharrell Williams) that compliments the film beautifully.

Unfortunately, Hidden Figures doesn’t walk away from having some problem in its undertaking. For the most part, I did like it, but there were a few nitpicks I have about the movie. For starters, the film feels long. With a runtime of 2 hours and 7 minutes, the movie certainly lengthy, which is sort of justifiable as the narrative of Hidden Figures has a lot of ground to cover. However, the duration of the film does cause the movie to have several “lulls” within its three acts, causing some small pacing issues throughout. Additionally, during the second act, while Katherine’s story arc takes a more prominent center stage in the movie, Dorothy and Mary’s story arc take a bit more of a backseat. That’s not to say that their stories aren’t important and / or palpable in the film’s overall narrative, but Katherine’s story is more “under the spotlight” than theirs, causing their journeys to be a more secondary. These are just merely minor nitpicks and don’t overall (for the most part) hurt my likeability towards this movie.

While the film’s story and setting are palpable and engaging in making a feature film, one of the greatest strengths in Hidden Figures comes from its cast of characters and the actors / actresses that play them.  Oscar winner Octavia Spencer, Oscar-nominee Taraji P. Henson, and award-winning musician / actor Janelle Monae lead the charge (as the film’s three main leads) and help elevate Hidden Figures into what it is. Each one does great work in their respective roles as trio of equally “gifted” intelligence African women, but Melfi and screenwriter Schroeder give each one, facing the trying times of nation’s racial segregations and in the workplace at NASA. As I said above, the movie mostly focuses on Henson’s Katherine and she does a spectacular job (something much different from role as Cookie on the hit TV show Empire), portraying Katherine as a brilliant individual who stands her ground in the NASA Space Task’s program. Behind Henson, Spencer and Monae do equally exquisite work in the roles as Spencer’s Dorothy Vaughan tries to change her “position” status by investing her time and knowledge in NASA’s future program, while Monae’s Mary Jackson tries to better herself (elevating her current position) and must first go to courts to see her dream realize. In truth, all three women do impressive jobs in the portrayals of these three women and the movie itself is that much better because of them.

The supporting cast in Hidden Figures is also a talented group, a large ensemble that play their roles effectively as well as delivering some enjoyable performances for the movie. Lead the charge (in the supporting players) is seasoned actor Kevin Costner, playing the role of Al Harrison, the NASA Space Task Group director. Costner, famous for his roles in Dances with Wolves, The Bodyguard, and Robin Hood: Prince of Thieves, proves once again that he’s the perfect fit for gruff, no-nonsense leader archetype role from the 1960s (similar to his work in Thirteen Days and JFK). Behind Costner is the Big Bang Theory star Jim Parsons as NASA Space Task Group’s head engineer Paul Stafford. While Stafford isn’t Sheldon Cooper, Parson delivers a fine performance in the role, undergoing his personal journey (coinciding with Katherine’s story thread) as the two buttheads now and again as he refuses to accept her help (or involvement) the space race. Set in a similar fashion is actress Kristen Dunst who plays Dorothy’s superior Vivian Mitchell. Dunst, famous for Toby Maguire Spider-Man movies and her recent role of the FX TV show Fargo, does a good and effective job as Vivian, playing a similar to Parson’s Stafford that projects the same harsh / blunt authoritative figure (to the film’s central characters) that undergoes her own personal journey throughout the course of the film. It’s kind of interesting (and good) to see these two characters (Stafford and Mitchell) as fully-developed supporting individual characters rather than one-dimensional antagonists.

Adding a love interest to the story is the recent Oscar Moonlight winner Mahershala Ali who plays military man Jim Johnson. The romantic subplot storyline between Jim and Katherine is a bit undeveloped in the movie, but works due to Ali’s charm and easy-going on-screen chemistry with Henson. Rounding out the cast is Aldis Hodge as Mary Jackson’s husband Levi and Glen Powell as famous (and charismatic) astronaut John Glenn.

Experience the unsung tale of three NASA women in the movie Hidden Figures. Director Theodore Melfi film explores the untold stories of real life women Kathrine Johnson, Dorothy Vaughan, and Mary Jackson through a cinematic lens, presenting firm execution in the film’s undertaking, which is thanks to the cast, the film’s director, and the subject matter being told. While the film doesn’t stray too far from the familiar path of making a “true life story” into a “feel good” movie as well as some other noticeable problems, the movie (as a whole) is still poignant, palpable, and entertaining. Personally, I loved this movie. The cast was solid and the story was very interesting, cultivating in a great film to watch and see. Thus, my recommendation for Hidden Figures is a positive one and I would give it my highly-recommended stamp of approval. It’s something that everyone should see and definitely has some replay value in its presentation. Whatever you take away from viewing the feature, Hidden Figures offer a very valued and underlining message of the importance of humanity (regardless of gender and the color of the skin), echoing the words of Costner’s Harrison “We get to the peak together, or we don’t get there at all”.