When it comes to great cinematic feats that are beautifully crafted, director Zhang Yimou is a visual master. After his involvement in China’s “cultural revolution” (he left his school studies and become a farmer laborer and text tile worker), Yimou went to Beijing Film Academy in 1978 and majored in photography. From there, he gravitated towards the world of filmmaking and in 1987 made his directorial debut with the film Red Sorghum. Yimou’s films have been revered has been stunningly visual and its carried throughout many of its films, including popular favorites like Hero, Hose of the Flying Daggers, and Curse of the Golden Flower. He was even honored by being selected to direct the opening and closing ceremonies at the 2008 Summer Olympics in Beijing, China (that’s pretty impressive!). Now, director Zhang Yimou, Universal Pictures, and Legendary films, present the cinematic film of blending Yimou’s visual style with Hollywood frivolities in the movie The Great Wall. Do these two movie ideas harmonize with one another or is it just a weird mashup that doesn’t work?

Set in an unidentified time in the distant past, Westerners William (Matt Damon) and Tovar (Pedro Pascal) journey across China in search for the fabled “Black Powder”, hearing stories of its explosives powers of the substance, which could change the face of warfare. After killing a strange in the dead of night, William manages to cut off its foot, showing his deadly prowess with such titular beast. When the pair are captured by the mighty military group (dubbed the Nameless Order), led by General Shao (Zhang Hanyu), William and Tovar are put to the test when a horde of creature called the Taoties return to attack the Chinese, who’ve built a vast weaponized fortress inside the Great Wall. Participating in the battle with fierce and unworldly enemy, William and Tovar inadvertently join the Nameless Order, impressing Commander Lin Me (Jing Tian). Preparing to escape from the Wall, with fellow prisoner Ballard (Willem Dafoe) and some of the elusive Black Powder, William beings to see the value of service, hoping to redeem himself as the Taoties regroup for a final onslaught attack.

As I mentioned above, I do remember seeing the opening and closing ceremonies of the 2008 Summer Olympics in Beijing and was quite impressed with it as it definitely had a lot of stunning visual flair to it. I will say that I’ve seeing two of Zhang Yimou films (Hero and House of the Flying Daggers). Both were good films that displayed a quality level in visuals, which heightened my interest in seeing The Great Wall. Like a lot of people, I remember seeing the trailers for The Great Wall and thought to myself “Oh, I have feeling that’s is going to be a pretty “blah” movie”. I really didn’t expect much from this movie (I sort of knew that going into the theater to watch it). When I walked out of the theaters, I felt a bit perplexed by this movie. The Great Wall, a film that blends Yimou’s style of filmmaking and Hollywood blockbuster aesthetics, sounds good on paper, but the actually theatrical film is a lower quality that winds up being mediocre. Yes, there’s plenty of monster mayhem in this movie realm of a Chinese fantasy dynasty, just not a good one.

With Yimou at the helm, The Great Wall, much like a lot of his past films, impresses on a visual scale. Not so much on CGI front (more on that below), but rather stylish in its practical effects (i.e. costumes and set pieces). The level of detail that is put into the various outfits and production sets is just amazing to see, a signature touch from Yimou’s style of filmmaking. This is also help with the boisterous production budget of a major Hollywood Studio (Universal and Legendary), which does make the feel large in scope. The design of the colored coded armors of the various groups of the Nameless Order are truly something, with a lot intricate designs, which sort makes the film feel like Chinese fantasy tale (a legend of sorts within its mythology). I can go on how love the sets and costumes, so I’ll just say that, while the movie may not rise above overall heightened expectations, the stylish cinematography for The Great Wall is stunning. Additionally, with a runtime of only 107 minutes long, the film doesn’t feel bloated as it moves at a pretty steady pace, which in this case, is sort of a good thing. As a side-note, the film’ score is actually really good, which is composed by Game of Thrones composer Ramin Djawadi, and worth noting.

Unfortunately, while the production quality is high and elaborate, The Great Wall isn’t truly epic as it wants to be. First off, despite some of the film’s more serious moment, the film is basically a B level movie (just on a large blockbuster movie scale). It’s not really intriguing or original (you’ll won’t be hanging on to the edge of your seat), it’s just simply glorified B-rated Hollywood movie. Maybe I’m just over analyzing the movie as it won’t bother some who watch The Great Wall, but (in truth), the feature is hardly being noted as a great Hollywood blockbuster film nor as a sweeping epic from Zhang Yimou’s movies. In conjunction with that idea, The Great Wall, due to its narrative structure, is a bit boring. Familiar plot beats and scenarios do quickly form in the movie and take the feature down a predictable path, which doesn’t add to the film’s overall tension and dramatic elements. More to the point, the script, which was penned by Carlo Bernard, Doug Miro, and Tony Gilroy, is pretty weak with some clunky dialogue that comes off as a bit silly or cheesy or even laughable.

Then there’s the CGI visuals of the feature, which are rendered mediocre to poorly. Much like last year’s Egyptian fantasy flop Gods of Egypt, The Great Wall has a lot of interesting concepts design work (whether creature design or in battle sequences storyboard), but, with a lot of various shots of digital tracking shots and green-screen backdrops, it’s hard to buy into this Chinese fantasy world. Additionally, there are couple of scenes (one or two moments in the film) that seem extremely ridiculous as you’ll be saying “oh, come on!” or even laughing at its execution in the feature.

From when the announcement was made to when he was shown in the trailers and everything leading up to its release, The Great Wall was scrutinized over the cast choice of selecting A-lister star Matt Damon as the films lead, pointing out concerns of him playing the “Great White Savior” archetype in the movie. In truth, Damon’s William kind of sort does play to that trope, while, at the same time, doesn’t. What I mean is that the character of William does enter the feature (an outsider) and does play a large role in the film (fighting alongside the Nameless Order against the Taoties army), but shares the spotlight with the sort of true hero of the feature General Lin Mae.

As for cast and acting of the movie, it’s a mixed bag. Matt Damon, known throughout Hollywood for many years in playing lead roles in movies like The Bourne films, The Martian, and Good Will Hunting, is okay as William, lending his large acting presence whenever he’s on-screen. Unfortunately, though he fits the natural role of “leading man”, Damon just seems a bit of a miscast in the film as I personally have a hard time seeing him in this role. He’s not the type of actor that excels in “period piece / fantasy drama” (if you know what I mean) and more suited for contemporary features. In addition, Damon chooses a weird sounding voice for his portrayal of William. I don’t know what type of accent it is, but it’s definitely “off-putting” to hear and not his natural voice, which would’ve been better. In short, Damon is okay in the movie, but should’ve been casted by someone else.

If I’m being truthfully, the spotlight of The Great Wall is better when its focused on the character of General Lin Mae, who is played by actress Jing Tian. Tian, known in TV series like An Epic of a Woman and The Glory of Tang Dynasty as well as upcoming theatrical films (Kong: Skull Island and Pacific Rim: Uprising), handles herself well as Lin, proving to be a powerful figure (both in character and on-screen presence). Unfortunately, as the narrative pairs a soldier from the east (Tian) with an outsider warrior from the west (Damon), and try to learn and change one another through their differences and experiences, it just falls short. The reason…. there’s literally no chemistry between the two of them, which makes their relationship feel hollow, cold to the touch, and unbelievable; arguably a very weak point in the overall film.

As for the supporting cast of the film, that too is a mixed bag. Perhaps the most standout character (both in major and minor roles) in the entire film goes to actor Pedro Pascal and his character of Tovar. Pascal, known for playing the memorable role of Oberyn Martell from Game of Thrones as well as Javier Pena in Narcos, does a good job as Tovar, interjecting his own charisma, and natural likeability to the character, even though he’s not really a stalwart one. To be fair, I think he does better than Damon’s William, with Pascal fully committing to the role. His cheesy one-liner jokes may not land as well as the film wanted them to, but he delivers them with just vigor and snarky bravado that you can’t but applauded Pascal’s Tovar in the movie. More to the point, the friendship bond between William and Tovar is a more convincing one rather than the wooden one between William and Lin (which is kind of sad if you think about it).

Then there’s the character Ballard, a fellow European mercenary who ventured to China for Black Powder as well, but has been prisoner of the Nameless Order for the last twenty-five years. Who plays Ballard is actor Willem Dafoe, famous roles in The Boondock Saints, Spider-Man (the Toby Maguire ones), and Finding Nemo. While Dafoe is a talented actor, with the possibility of creating an interesting character, the end result of Ballard is nothing more than a weak subplot storyline that seems superfluous in general as well as larger narrative arc in the film. Thus, Dafoe’s Ballard is a footnote in The Great Wall (no more, no less). Another noteworthy supporting cast members include, Andy Lau as Strategist Wang and Zhang Hanyu as Shao, as both play duty-bounded men in service to the Nameless Order. 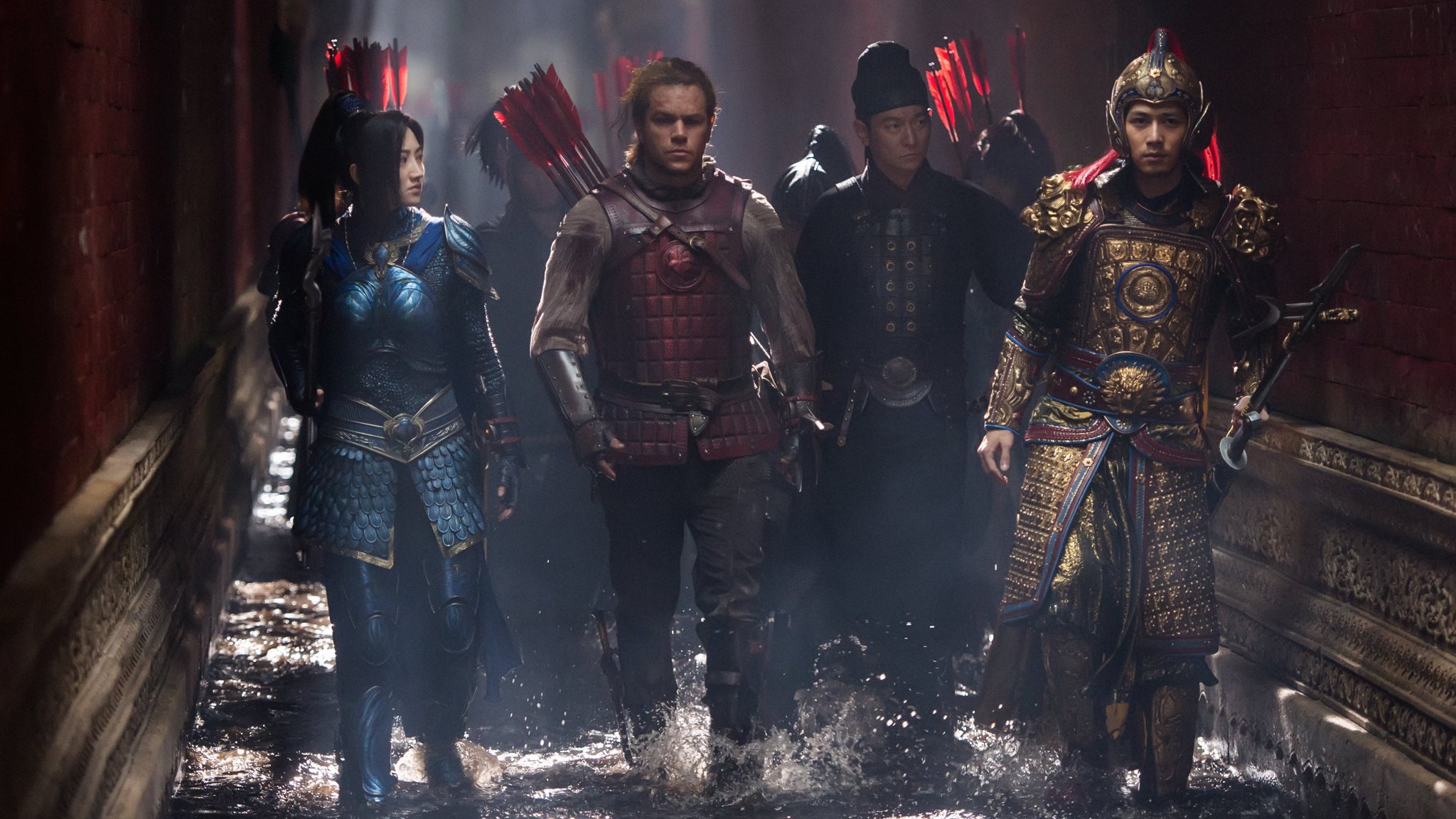 Worlds collide as monsters and men clash in the fantasy action movie The Great Wall. Director Zhang Yimou’s newest film embraces his signature style of visually Chinese epics with the aesthetics of a modern Hollywood blockbuster. Unfortunately, with the added problems of choosing action over story, recycled plot beats, several crude CGI action sequences, one or two ridiculous moments, several cheesy (and misfired) comedic lines, a wooden romance relationship, and Damon’s horrible voice for William, make the film far from the stellar action epic it desperately wants to be. Personally, I thought the movie was okay. It was definitely visually beautiful and somewhat entertaining, but was pretty “meh” to me. Thus, I would say that this movie is best seeing as a rental as it’s not really worth seeing in theaters (not even a matinee showing). When it’s all said and done, despite the noble attempt the film makes of blending “east meets west” styles of filmmaking, the end result is just an odd mashup, making The Great Wall a mediocre film rather than a great one.