The Edge of Seventeen Review

FOR THE MILLENNIAL GENERATION

Being a teenager in high school. Everyone remembers that time and each person has their own personal experience. Some may look back on it with fond memories of their youth, while others wish that they could erase the time period from their memory (out of sight, out of mind). Back in the 80s, Hollywood took a closer look at the teenager years (albeit dramatized versions) and produced some memorable hits about those adolescent high school years with such films as The Breakfast Club, Pretty in Pink, and St. Elmo’s Fire (all three were directed by John Hughes) and many others films. Since then Hollywood has revisited the insight into the drama of life of a teenager (in the 90s and 00s), but only partially examining it, playing up the stereotypical angst that’s (usually) muddles the movie’s narrative. Now STX Entertainment and director Kelly Fremon Craig, prepare to give a deeper insight into the modern (millennial) teen with the movie The Edge of Seventeen. Does this movie speak to the current generation (and maybe its past generations) or does it completely miss its mark (and its intended target audience)? 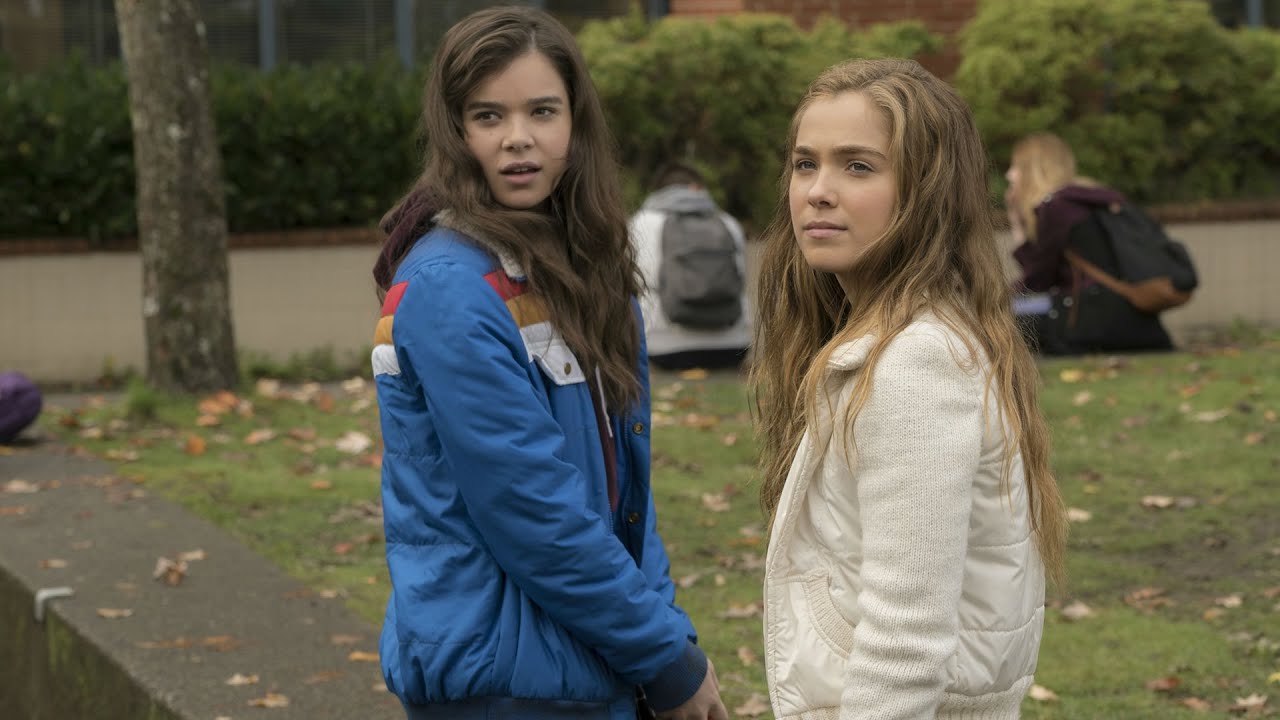 Nadine (Hailee Steinfeld) has never had it easy, finding it virtually impossible to fit in at school due to her awkward ways, finding a more fulfilling friendship with her humdrum teacher Mr. Bruner (Woody Harrelson), who reluctantly listens to her daily drama. Nadine’s only friend is Krista (Haley Lu Richardson), a fellow classmate who has shared a friendship with Nadine ever since they were young. However, Krista’s eye soon catches sight of Nadine older jock brother Darian (Blake Jenner), with the two eventually become “exclusive” with each other, which causes Nadine to feel hurt and betrayed by both parties. With her brain emotionally drained, still coupling with the loss of her father years earlier, which as fogged her absentee mother, Moana (Kyra Sedgewick), Nadine finds friendliness with the quirky Erwin (Hayden Szeto), a lovesick teen who can’t inspire a romance between the two, but her focus is on Nick (Alexander Calvert), a mysterious / rebel youth who works at a local pet store. Unfortunately, with her social invisibility is beginning to lose its freshness, Nadine is forced to confront herself, her problems and those around her. 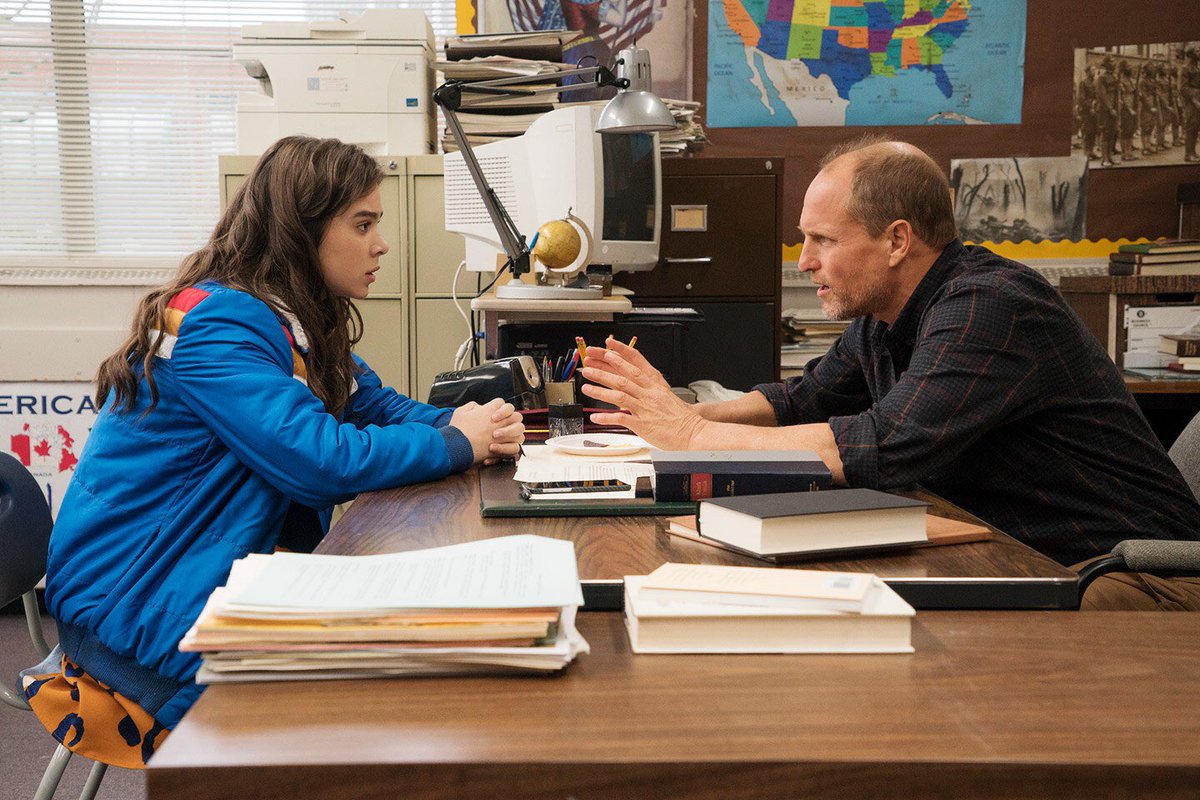 Personally, I enjoyed high school and my teenage years. Yes, I’ll admit was a bit awkward at first (didn’t have a lot of friends), but I’m soon developing some close friendship with a few of my peers, some of which I still talk to. During my junior and senior year of high school, I was kind of like a “who’s who” person, meaning that I knew a lot of people’s business from a variety of high school social cliques and was generally accepted by most groups (couldn’t crack into the cheerleader clique) as a moderately above average teen in the school’s hierarchy of popularity. Anyway, enough about me and my high school years…onward to my review. I remember seeing the trailer for The Edge of Seventeen and sort of dismissed it, believing it to be another run-of-the-mill teen drama (like Juno or The Duff). Besides, the movie was theatrical release around the same time as a lot of other movies that I was more excited to see (Fantastic Beasts, Moana, Billy Lynn, etc.). However, reading several “glowing” reviews for the movie, I decided to take a chance go see The Edge of Seventeen. What did I think of it? In truth, it was well-crafted “coming of age” story that speaks to both its modern audience as well as echoing themes / message of teen dramas that have come before it, making The Edge of Seventeen a very multi-faceted feature beyond its quirky / awkward presence.

The Edge of Seventeen is directed by Kelly Fremon Craig, who’s past film projects included as screenplay writer for the short Streak and the film Post Grad, making this film her directorial debut film. In truth, she handles it quite well, portraying a movie that sort of channels the spirt of other teen movies (a bit cliché at times. More on that below), but has a better emotional approach. Yes, the film is a bit quirky and has some comedic moments within the teen satire genre, but narrative seems to be more grounded in emotional drama rather than in teenager angsts and comedy routines. In addition to directing, Craig also pens the film’s script and includes many of the commonplace tropes that usually found in a John Hughes style film or those similar insights into a teen’s life. Like many have said about this, The Edge of Seventeen feels in very much so in the style of John Hughes (the famous director of several popular 80s teen movies). While this is true, Craig paints the film in modern times, playing up the standard awkward teenager role within current times. In addition, the movie doesn’t go big (and that’s good thing), with the feature relatively small and grounded in reality (i.e. no super over-the-top huge teen parties or using the prom scenario as the climatic end piece, or quirky rituals of trying to get “laid” before graduation) and keeps the narrative story tight with no superfluous sub-plots that are used for comedic gags. To put it simply, The Edge of Seventeen is story about a young teenager, who (like her fellow peers) are vulnerable and a bit aloof, but lack self-awareness for their actions. This, of course, tends to make The Edge of Seventeen relatable to its viewers, a subtle reminder to us all our teenage years in the real world and not in Hollywood version.

As I said, The Edge of Seventeen is relatively smaller features and its production budget is small as well (roughly 9 million). However, while the film lacks a Hollywood blockbuster-style budget, Craig and her filmmaking team still keep the film’s integrity intact, through the usage of cinematography, set designs, and the overall “average” suburban lifestyle of a high school teenager (in its various locations in and out of school). Again, this isn’t a Hollywood version of what high school, but rather a more realistic approach and aesthetic. As a side note, the film’s soundtrack is pretty good as well as some visual sight gags that Craig disperses throughout the movie.

While many (including myself) praise the 80s-movie style influence in The Edge of Seventeen, it’s also its weakness (only slightly). Yes, it’s a teen “coming-of-age” drama feature that many can relate to and seeing in plenty of 80s movies, but that means it lacks a somewhat originality. Thus, The Edge of Seventeen feels like a mixture of a lot of similar movies, with a sprinkle of Pretty in Pink, a dash of The Breakfast Club, toss a sub-plot narrative thread from Easy A, and maybe some of the crass language from the American Pie movies. In addition to that notion, once all the characters in the movie are introduced and established a bit, it’s pretty obvious what roles they fill (i.e. the awkward teenager, the popular teen, the secret love interest, the single over-bearing / conflicted mom, etc.), where their character serves in the film’s narrative, and where they ultimately end up by the film’s end.  In short, The Edge of Seventeen is bursting with teen drama clichés with familiar overtones and predictable plot. It’s just up to you whether you fully embrace that ideal or treated as a bored and tedious throwback narrative. Personally, I didn’t mind it (as the movie has deeper and refined approach to the material) , but the movie certainly falls into some overtly familiar territory, lacking a bit of freshness and feeling slightly like a John Hughes movie for the millennial generation.

Leading the charge in The Edge of Seventeen is the young adult actress Hailee Steinfeld, playing the film’s central character of Nadine. With her breakout role in the Coen Brother’s True Grit (as well as recognizable supporting roles in Ender’s Game and Pitch Perfect 2), Steinfeld is fantastic as Nadine, delivering a great performance that acts as the “beating heart” to the entire film. Steinfeld’s showcases a wide range of emotions in this role (awkward, rebellious, insensitive, genuine, etc.) in a very realistic manner, which makes us (the viewer) relate to her character more. She even looks and acts the part of a awkward teen, dressing up in mismatch outfits and speaking in such an insensitive and unflattering way, which most teens do.

In its supporting cast, The Edge of Seventeen doesn’t quite “break the mold” with its side characters, but it does breathe new life into these classic archetypes, which are part of the genetic make-up of teen “coming of age” dramas. Blake Jenner character Darian, Nadine’s popular older brother plays out the stereotypical role of the “good-looking popular high school kid”, but (towards the end of the film) is allowed to grow behind his character persona with more depth given to his character, while Haley Lu Richardson’s character Krista’s, Nadine best friend, is a pretty face, but doesn’t resonate as strong beyond the parameters that her character is given. Don’t get me wrong, Richardson’s acting is good, but there isn’t much growth to the character of Krista beyond her initial setup. Perhaps the best, beyond Steinfeld’s Nadine, is found in the character of Erwin, played by Hayden Szeto. Szeto’s screen presence as the awkward youth compliments Steinfeld’s Nadine, making the pair’s chemistry that more believable in both their portrayals of these gawky teens. As a side note, Alexander Calvert’s Nick is given a lot of character development, but gets the job done, playing the mysterious rebel high schooler.

In terms of adult actors, Woody Harrelson and Kyra Sedgewick play familiar roles with the snarky / sarcastic mentor figure Mr. Bruner (Harrelson’s dry and monotone sound voice fits perfect in this role) and the well-meaning, but scattered brain single parent Moana respectfully. As I said above, both these characters aren’t anything new, but are lifted above their classic personas due to their Harrelson and Sedgewick’s performances.

Director Kelly Fremon Craig’s directorial debut film digs deeper beyond the surface of millennials (i.e. social media, texting, and other modern conventions and conveniences) in the new movie The Edge of Seventeen. While the film does tread down some well-trotted terrain and areas of familiarity, it still taps into the necessary emotional drama that its rooted into the core “real life” fundamentals of being a teenager, making the feature rise above some of its former predecessors. Personally, it was a pretty good movie. Yes, it had the clichés and a bit predictable story, but it had equal parts charm, humor, and heart in its presentation and was well-directed and played out great with its cast selection. As for my recommendation, I would say it this movie is a solid “recommended” from me. Whatever you take away from this movie, The Edge of Seventeen is (by design) a movie that’s speak to the current generation of teenager, but also makes it accessible for older generation to remember their youthful years (be it good, bad, or indifferent).

The Edge of Seventeen  is rated R for sexual content, language and some drinking