Over the years, Hollywood’s has produced some bank robberies / heist movies, creating a subgenre in the thriller / suspense genre. Such movies include The Town, Inside Man, Public Enemies, and Bonnie and Clyde are some prime examples of this. Interestingly, there has been others feature films that bring amore comedic or have a “blockbuster” flair to the proceedings, including Ocean’s Eleven (the original 1960 film plus the three new remakes by Steven Soderbergh), The Italian Job, and (to a lesser extent) Fast Five. In addition, there’s been a plethora (too many mention) of TV dramas that cover heists or bank robberies (whether by the entire series premise or specific episodes). Suffice to say, these interoperations usually focus on the event (picking off multiple or an elaborate heist / robbery) or the characters that are involved in the event (some fictional and some based on real-life). In some cases, it’s both. Which brings us to a new movie as Relativity Studios and director Jared Hess shine a cinematic and comedic light on the infamous 1997 Loomis Fargo robbery (the second largest cash robbery on U.S. soil) with the film Masterminds. Does this film proof effective as heist / robbery feature or does it get caught in the act….and fail?

In 1997, David Ghantt (Zach Galifanakis) is an unsatisfied working for Loomis as an armored truck employee and is about to be married to very awkward and odd Jandice (Kate McKinnon). Entering his humdrum life comes Kelly Campbell (Kristen Wiig), a co-worker with a special feminine “pizzazz” that wins David over, with the pair becoming a flirtatious relationship. When Kelly is fired from her job, her pal Steven Chambers (Own Wilson) takes her in and uses her to get to David, planning a robbery heist that promises the guard a carefree life of money and Kelly in Mexico if he cooperates. After completing the heist, David effectively steals roughly 17 million dollars, escaping to paradise alone, waiting for Kelly to join him. However, things do go according to David’s ideal plan, as Steven “oust” Ghantt, sending the FBI agents after him (including Leslie Jones), while he (Steven) enjoys the good life with his newfound wealthy status. Now, David is now on the run, trying to figure what’s happening, seeking aid from Kelly, while also eluding Mike McKinney (Jason Sudeikis), a determined hitman who finds a special connection with his target.

Honestly, I’ve never seen an actual “bank robbery” (thankful) and I never hope to see one. The closest I’ve seeing are the ones that are shown in TV / films, so I get a sense of how one might be (albeit a bit dramatized) like the ones I mentioned above. This, of course, brings me back to the 1997 Loomis Fargo robbery and its film adaptation counterpart (Masterminds). I’ve never even heard about the Loomis Fargo robbery, so I was surprise to hear that it was actually a real thing that happened (kind of a bit shocked to hear about). Anyway, this brings me to the movie Masterminds (not be confused with the 1997 Patrick Stewart movie Masterminds). I remember seeing the trailer for this movie all the way back in the beginning of last year (Early 2015) and actually forgot about it. Come to find out that it’s delay was due to the film’s distributor financial problems (Relatively Media). So the movie itself passed out of my mind until I kept seeing a new trailer for this these past several months at my local movie theater. In both trailers, I wasn’t super impressed with the movie, so I wasn’t eager to see the movie. However, on a lazy Monday afternoon, I decided to take a chance (out of boredom) to see Masterminds. After seeing the movie, I felt that Masterminds, while some humorous parts and a collective group of talented comedic actors / actresses, is a pretty mediocre endeavor and forgetful film for its genre.

The movie is directed by Jared Hess, who has previously directed other comedy films such as Napoleon Dynamite, Nacho Libre, and Gentlemen Broncos. Much like Napoleon Dynamite, Hess seems to create a very off-kilter / quirky when approaching the story of the 1997 Loomis-Faro Heist. I’m sure that the real life event that the movie portrays wasn’t so comedic, but Hess allows the film to be filled with numerous sight gags and obscurities to generates laughs, turning the Loomis-Fargo robbery into a comedic spoof parody of it, with several nuances to other heist films. This makes the narrative of Masterminds a bit “odd” with some humor that, while it has a few chuckle moments here and there, but it feels a bit flat. That being said, the overall humor in the movie is quirky and not for everyone. Some might laugh a lot, while other might be disappointed. Unfortunately, I was in the latter category as I only found a few bits funny, leaving most of the picture’s joke and gags flat or even DOA (dead on arrival). In short, Hess might be trying to turn some serious into romper room comedy, but it just doesn’t work the way it wants to be.

Even if you push the film’s comedy aside, Masterminds (as a whole) feels generic. What I mean is that the movie doesn’t make its personal “mark” to its viewers. There’s real no standout moment that’s quite as memorable nor incredibly funny, which, in the case of comedy film, is bad. What that ultimately effects is the story itself as the feature becomes a bland formulaic comedy troupe. Basically, a viewer can figure out what’s going to happen before it does happen. This is ususally commonplace in comedies, but can elevate by sharp writing and humorous scenarios. Unfortunately, Masterminds doesn’t achieve, leaving a shallow movie that unremarkable, even though it’s based on a true story). Then there’s the film’s editing, which is definitely choppy. You can obviously tell that Hess and his editors did some heavy editing for the movie’s final cut, leaving a lot of shot material (assumingly) on the “cutting room” floor.

Mastermind’s cast is (collectively) a group of talented comedic actors / actresses that are quite recognizable from their other works. One would think that this selection of performers would help elevate this movie. Well…it does and it doesn’t, but mainly doesn’t, which is disappointing. Personally, I don’t it’s their fault, but rather on the movie’s script, which was penned by SNL writer Emily Spivey and Chris Bowman and Hubbel Palmer (the duo behind the very short-lived Napoleon Dynamite cartoon TV show). These writers seem to designed the screenplay loosely around its cast improve skills, which is good, but leaves a lot of its written flat and dull (nowhere nearly as sharp as some other recent comedies).

That being said, actor Zach Galifianakis, known for his comedy roles in The Hangover trilogy and Dinner for Schmucks, gives a likeable performance as the film’s central hero David Ghantt. He fits the part the Hess and his writers are looking for in the movie, but it’s a far cry from better roles that he’s played in past movies. Again, the movie doesn’t allow Galifianakis’s Ghantt to be memorable. Kristen Wiig’s Kelly Campbell fares a bit better as she’s more comfortable in the role, but it’s not a memorable role in Wiig’s film career. What is also obvious is that both Galifianakis and Wiig don’t have any great written material (nor romance chemistry) given to make their characters’ have a romantic connection.

Owen Wilson turns an okay performance as the scheming Steve Chambers (the film’s antagonist), while Jason Sudeikis is probably the best supporting character in the movie as the eccentric hitman Mike McKinney. Although, it’s not one of Sudeikis’s best character roles. Wiig’s familiar SNL cast members, Leslie Jones and Kate McKinnon do have some briefs movements in the spotlight as FBI Special Agent Scanlon and David’s fiancée Jandice. Unfortunately, these two actresses are limited by their characterization, which is a shame because both were incredibly funny in the new Ghostbusters movie.

Lastly, one of the positives I have to say about Masterminds is its song selection, which was scattered throughout the movie. From Rare Earth’s “I Just Want to Celebrate”, to Montell Jordan’s “This Is How We Do It”, to The Clash’s “I Fought the Law”, and even Enya’s “Only Time” (in a very awkward, but slightly humorous wedding picture scene). 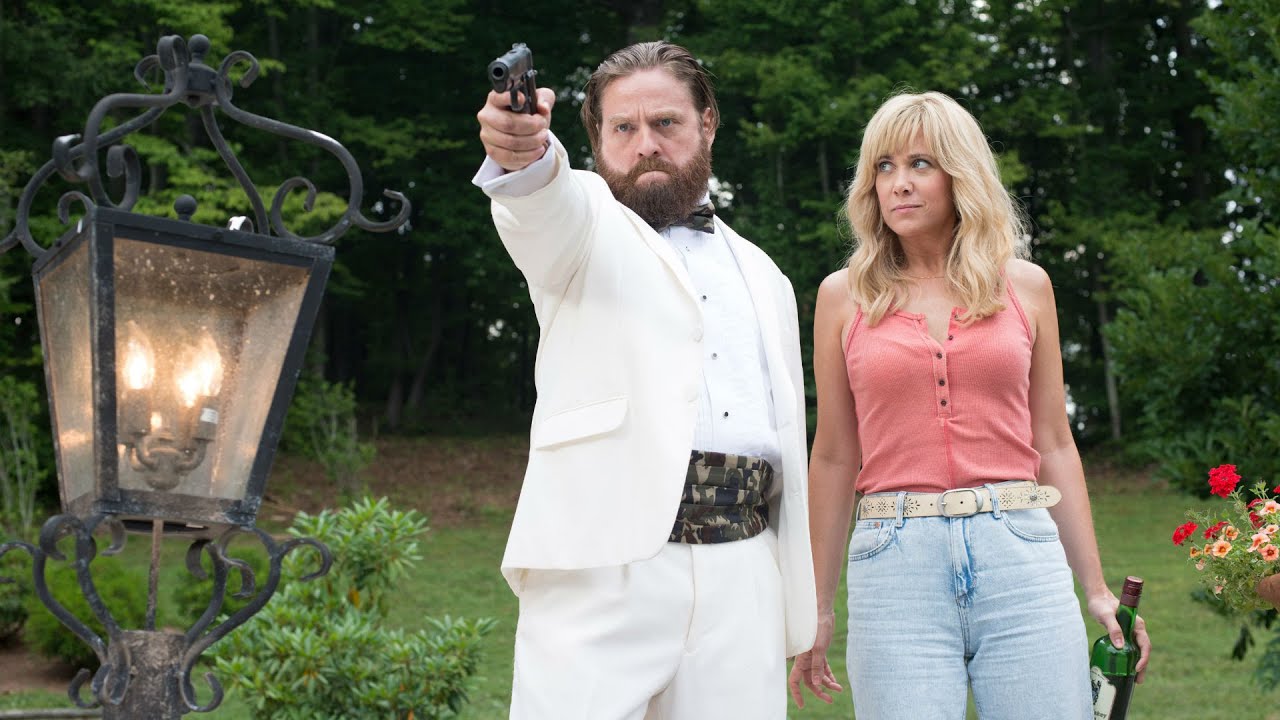 David Ghantt goes on the run and tries to figure out what happened (bumbling along the way) in the comedy feature Masterminds. This off-kilter comedy that’s directed by Jared Hess paints an assuming premise (given its real life story) with a great assemblage of comedic actors / actresses to fill in the roles. Unfortunately, the movie is tedious, mediocre, and not as funny as it wants it to be, making the feature film misfire than a slam-dunk success. Personally, it was pretty “blah” of a movie. It just felt too generic and didn’t really offer anything that hasn’t been done before in the way of comedy movies. Plus, the cast, while I do like all of them, were wasted on this project (such a shame). As for my recommendation, I would say it’s definitely a skip, If you’re somewhat interested in seeing (which I don’t you should be), wait for it to come to TV in about a year as it’s definitely not worth your time spending money on it (whether in theaters, physical or digital copy, or even renting it). While the movie may be based on a true event, Masterminds is a shallow, subpar, and pretty forgetful comedy endeavor, with plenty of oddball “humorless” idiosyncrasy.

Masterminds  is rated  PG-13 for crude and sexual humor, some language and violence