Director Oliver Stone has been a movie film director for more than 45 years as well as screenwriter and producer. After serving sometime in the US army during the Vietnam War, Stone turned to college, graduating from New York University with a Bachelor of Fine Arts degree. This ultimate turned his attention down the path of filmmaking, producing his first short Last Year in Viet Nam in 1971 and then was Seizure, his first feature film, in 1974. From there, Stone has directed, produced, and written several features, including Platoon, JFK, Alexander, Any Given Sunday, and Wall Street (and its sequel Wall Street: Money Never Sleeps) to name a few. Now director Oliver Stone and Open Road Films and Endgame Entertainment present a cinematic spin to real-life controversial story in the movie Snowden. Does Stone’s newest film shine something new on the Edward Snowden tale or is a biopic that doesn’t resonate as strong as its real life source material?

Ever since he was a young man, Edward Snowden (Joseph Gordon-Levitt) wanted to serve his country. After an injury robs him of leg strength, Snowden leaves the military and switches his focus to the CIA, working computer surveillance under the over-watchful tutelage of Corbin O’Brian (Rhys Ifans). With Corbin impressed by his internet prowess, Snowden builds a reputation for a strong worker, but his focus on the facts is challenged when he’s allowed to access to secretive programs that offer shockingly in-depth spying, with officials able to find anyone anywhere with few clicks and simple keyword strokes. Horrified by this new found discovery, Snowden is caught between his duty to the CIA and his own conscience, which urges him to something radical to let outsiders (the public) know just what’s going on behind the government’s closed doors. The struggle wears heavy on Snowden, and it ultimately infects his relationship with girlfriend Lindsay Mills (Shailene Woodley), feeling paranoia has taken over his life. 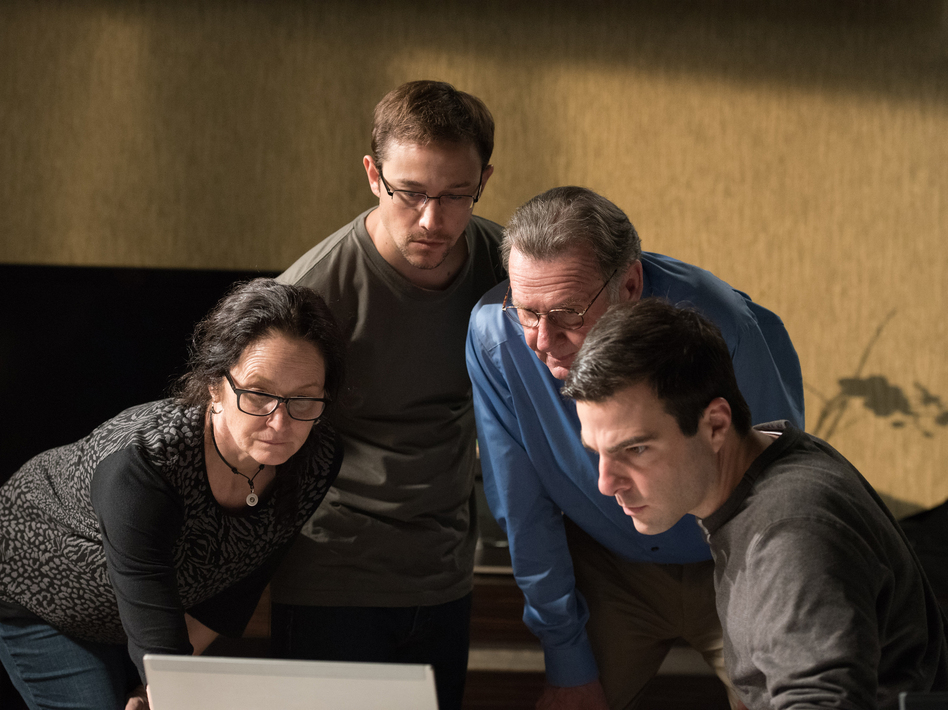 Being a movie buff, I’ve seen plenty of Oliver Stone movies (basically the ones that I mentioned above), with Wall Street being favorite of the group (remember…. greed is good). While I do appreciate his movies, I do know some film critics have criticized Stone’s directorial approach in some of its films (some with good reasons). A prime example of this is his film Alexander, a movie that I really do like). Basically, Stone can’t let the story of Alexander go as he has revisited it several times…. like four times, with the film’s original cut, the director’s cut, the final cut, and the revisited cut). You what to let the story of the Macedonian King go, Mr. Stone…. haha. Anyway, back to the review. Of course, I remember hearing all the news media going crazy when the real life Edward Snowden released all the NSA documents in 2013, the government surveillance into the public’s private life, and all the coverage of being either a hero or traitor. In the back of my head, I kind of knew (knowing Hollywood’s current mindset) that I would one day see a feature film that’s based on Snowden’s life and the decisions that made him infamous worldwide. After seeing the movie, I thought that Stone’s Snowden is a solid, yet flawed (shallow) portrayal of an enthralling frenzy incident that asks people to what contemplate some serious questions.

Whatever your stance on him, Edward Snowden has become an iconic individual in present day culture, a source of new media outlets in their coverages about him (and the events that surround him) and much heated debate amongst the public. Basically, like what Captain America: The Winter Soldier stated, the choice of freedom over security plays a paramount in Snowden’s leaked incident, which is a palpable question to ask, offering up a very dynamic discussion on what the government is looking at in our private lives (i.e. phone tapping, camera surveillance, etc.). Thus, Snowden (the movie) re-enforces and reasks these fundamentals question in the film, following the character of Snowden as he undiscovers the truth of what his country is doing (under the hidden guise to the public). Its compelling drama, ripe to be made into a movie as Stone makes his way in telling Snowden’s story, underneath a cinematic movie lens (as the opening title card indicates). In terms of filmmaking, it’s a standard theatrical biopic, with the right touches of lights, camera, action through filmmaking that Stone, a seasoned director, is capable of handling. This, of course, produces a fine “presentable” feature film that dabbles in some serious questions about our nation’s security.

Problems, unfortunately, do come up in Snowden, preventing Stone’s latest film from becoming a flawless biopic. The main problem is that the movie is slanted a bit towards pro-Snowden than anti-Snowden. Though Stone does present evidence and dialogue of presenting both sides of the subject matter’s argument, which again can lead to a good discussion following seeing the movie, it’s clear that the movie leans more towards portraying Snowden as righteous hero of sorts. Maybe Stone didn’t want to upset moviegoers and decided to “play it safe”, with a sort of one-sided viewpoint. This comes contrast to the Academy Award-winning documentary film Citzenfour, which is said to have more arguments on both sides. Though I’ve never seen Citzenfour, I did hear that it’s supposed to be really good (might have to check it out). Thus, it might make viewers who watches Snowden feel a bit jaded as Stone paints Edward Snowden as modern day hero rather than dousing him ambiguity (a few shades of grey).

Again, whether he is or not is datable through many people in the public. Another problem is that the movie feels a bit choppy, circumnavigating through Snowden’s life via a series of important flashback points that are pivotal to his life. In an interesting filmmaking approach, but it makes the film (as a whole) feel incoincident, with not a natural flow. Also, the movie is devoid of any action or tense scenes. I know its not a deal breaker, but still a little could’ve made this film a tad bit better. In addition, the film seems to struggle to reach its end. I’m not saying that the ending is poignant and impactful, which it is, but, with a runtime of two hours and 15 minutes, it feels like somethings are being stretched (pacing issues) and adding some “superfluous” scenes here and there to lessen the movie. Basically, the movie could’ve been reduced to a 2-hour feature film for a more refined presentation.

The cast in Snowden has plenty of recognizable faces from various film / TV projects, whether delegated into major role or small supporting ones. Of course, the film’s strongest asset comes from its lead actor Joseph Gordon-Levitt as Edward Snowden. Gordon-Levitt, who has become a more prominent actor in recent years with such films 500 Days of Summer, The Walk, and 50/50, gives an explementary performance in the movie, embodying the character of Snowden and even bearing a close physical resemblance to him via look and dialogue speech. Levitt also utilizes his likeable charm when on-screen to portray Snowden as a conflicted person, who’s caught between loyal to his nation and his own moral principles. Gordon-Levitt paints Snowden in a very sympathetic role, a strong fit for the film’s protagonist role, carrying the bulk of the feature on his performance. In short, he’s arguably the best part of the movie and what makes Snowden work the way it does.

In terms of a love interest for Snowden, the role falls to actress Shailene Woodley as Snowden’s girlfriend Lindsay Mills. Woodley, known for her roles in The Fault in Our Stars and The Divergent Series movies, turns a good performance of Lindsay, offering up emotional elements to the pairs relationship. However, her paring with Gordon-Levitt is a bit odd and their chemistry with each other isn’t fully there, creating a clunky romance when the two are on screen together. Still, her acting is good enough to make the character not a complete train wreck.

Other notable roles in Snowden, include the three news journalist reporters (Zachary Quinto as Glen Greenwald, Melissa Leo as Laura Poitras, and Tom Wilkinson as Ewen McAskill), who helped Snowden leak the information, as well as Rhys Ifans, who plays the cold and austere CIA operative overseer Corbin O’Brian. The rest of the supporting cast of the movie are definitely recognizable faces, but aren’t quite fleshed out. This includes, Nicholas Cage (more subdued than normal, but still Nicholas Cage-esque) as Hank Forrester, a former whistleblower who is now CIA teacher, Scott Eastwood as Trevor James, Timothy Olyphant as CIA Agent Geneva, and Joely Richardson as Janine Gibson. The all give good performance, but are, more or less, “cogs in the machine”, playing their various parts for the character of Snowden to interact with throughout the narrative. Lastly, the real Edward Snowden makes an appearance at the end of the film, which (personally) I thought was pretty neat and cool. 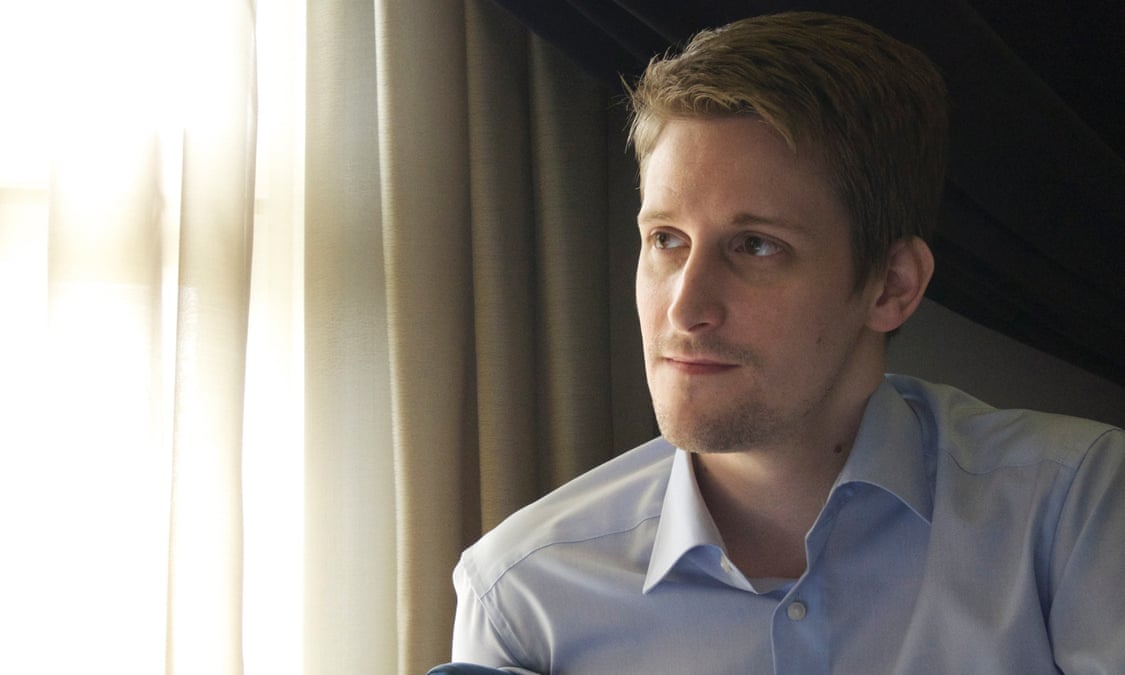 The story of Edward Snowden gets a cinematic representation in the new bio-pic drama Snowden. Director Oliver Stone newest film offers a look into the life and times of Snowden’s work, navigating through a series of events that ultimately leads him to where he currently stands in present day. To me, the movie was somewhere between being okay and good. It was definitely interesting (with a good cast), but the film sort of plays it safe in terms of filmmaking, offer up a solid narrative that’s slightly marred by conventional storytelling, pacing issues, and maybe a slightly biased-opinion. Again, like I said above, the overall likeability of Snowden ultimately depends on where you stand on the real Edward Snowden (and what he did). Thus, I verdict is an “iffy-choice” as some will sing its praise, while others won’t. For what it’s worth, Snowden represents an accessible entry point into Snowden’s story to the uninitiated, with the hopes of encouraging people to read up on the true-life story or contemplate some serious debatable questions on freedom and security.

Snowden  is rated R for language and some sexuality/nudity