INTO THE WOODS (AGAIN)

Back in 1999, the film known as The Blair Witch Project came out of nowhere, creating a loud of buzz that summer “at the movies”, rivaling only to Star Wars: The Phantom Menace. Presented in the style of “found footage”, this indie film, which followed three student filmmakers who venture into a haunted wood in search of proof the local legend known as the “Blair Witch”. In truth, the film was effective in its style, blurring the lines of a cinematic feature and a stark reality that fooled some into believing that the movie that they were watching was a real-life documentary film. Whatever your stance on the movie was, The Blair Witch Project was a success and claimed roughly $140 million at the box office (pretty good for a movie that only cost $60,000). After the first film, the whole “Blair Witch” grew into a franchise with several media outlets, including a sequel film (2000’s Book of Shadows: Blair Witch 2) as well as video games, novels, and comic books. Eventually, the whole wonder of The Blair Witch Project (and its franchise) faded, with various pop culture medias relishing the opportunity to spoof or parody the film’s iconic moments. Now, after 17 years since its original release, Lionsgate and director Adam Wingard present a direct sequel to 1999 feature titled Blair Witch. After so many years, does this film strike the same fear and terror as it back in 1999 or has the whole “scare factor” run out of the infamous witch? 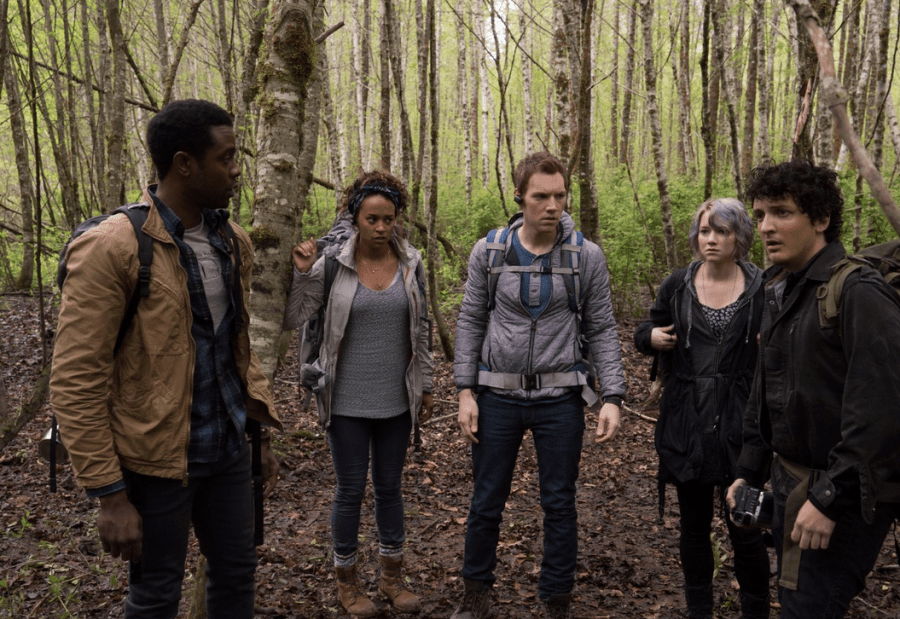 20 years ago, James Donahue (James Allen McCune) lost his sister, Heather, in the Blacks Hill Woods near Burkittsville, Maryland, with only the footage of her nightmarish ordeal left behind. The mystery to what actually happened and if she’s still alive has haunted James all these years.  And now, he’s ready to do something to return to find her. Joined by film documentarian Lisa (Callie Hernandez), and friends Peter (Brandon Scott) and Ashley (Corbin Reid), James returns to the Black Hills Woods, inspired by a YouTube video that surfaces that includes a blurry image of female (presumably Heather). Traveling to Maryland, the group meets up with amateur paranormal local hunter Lane (Wes Robinson) and his girlfriend, Talia (Valorie Curry), who ask to tag along, which James and friends reluctantly agree. Entering the woods with all sorts of modern video-capturing equipment and GPS tracking, the group suddenly realizes that the legends of infamous Blair Witch are true, tormented by her twisted psychological games and pull the strings to lure them deeper into the nightmare forest dominion.

I believe I was in 14 years old (the summer between 8th and 9th grade) when The Blair Witch Project came out. Of course, I didn’t go see in theaters as, even back then, I did not like horror movies. I did eventually see it when came out later that year on its home release and (naturally) I thought it was good…but scary. What I found scary about the movie was that my dad hid in the closet (after we paused the movie for a break) and jumped out a scared me, my brother, and our two friends. (haha…. thanks, dad!). What made it even more scary was the fact I lived in Maryland (at the time) and was about 30-40 minutes away from the Black Hills near the town of Burkittsville, where the movie took place. Yeah, I definitely had some nightmares of the “Blair Witch” because of that. After seeing the movie, I wasn’t fascinated about its franchise as I saw its sequel (Book of Shadows) and found it stupid, a sign that Hollywood was just trying to “cash in” on the success of the first film. Likewise, with the rest of its media outlets, preferring just care about all the film’s spoofs and parodies more rather than its canon series or its folklore. Thus, this all brings us to the present (2016) as I remember seeing the trailer for Blair Witch and was a bit intrigued to see this movie. Again, as many of my readers know, I’m not a huge fan of horror movies, so I’m taking a chance to see this movie. What did I think of the new movie? Well, while bigger (in scope) and in some scary tactics, Blair Witch is effectively the same as it predecessor, which is both good and bad.

Blair Witch is directed by Adam Wingard, who previously directed such films as You’re Next and The Guest. Accompanied by Simon Barrett to pen script (who also worked You’re Next and The Guest), Wingard shapes this sequel in the same style as the first one, starting out as a lighthearted journey that grows more scarier and tense as the movie moves towards its finale encounter with Blair Witch herself. Basically, if were a fan of the first film, then you probably will like Blair Witch. Wingard also makes the film seem a bit bigger than Project  (the abbreviated name for The Blair Witch Project) did with some more elaborate scare scenarios to terrorize the central characters. He makes the film place a more emphasis on sounds, hearing the Witch’s “thudding footsteps” and her monstrous low roar definitely “creepy” out more than in Project. Even the whole ambiance sound of the forest help adds to the movie’s tension, whether by natural sounds or the distant howling of animals at night. Also, Wingard doesn’t acknowledge the events of Book of Shadow, making Blair Witch feels like the “only” direct sequel to the original film.

Interestingly, the film also utilizes modern technology with the main characters using up-to-date devices, including video recorders, a GPS tracker, and even drone to help document their footage and their findings. It’s a neat inclusion, one that wasn’t available to the original 1999 film. Given the lengthy gap between the two movies, many viewers are now well-versed in understanding how “found footage” movies work. Thus, Wingard utilizes that knowledge when shaping Blair Witch, using the shaky cam effect to distortion the images on-screen as well as the abrupt camera jolts and glitches to keep a viewer on the edge of suspense. As a word of caution, if your prone to motion sickness or even bit claustrophobic, Blair Witch is not a movie you want to see. Lastly, Wingard also interjects a bit more knowledge (or rather lore) into whole “Blair Witch” legend (posing some questions, and answering a few), but still leaving the legend itself shroud in a veil of darkness. Side-note…I bet more will be answered if future installments are commissioned.

Like before (in Project), a viewer never really gets a clear shot of how the “Blair Witch” actually looks like. Yes, you catch fleeting glimpse of her in the Blair Witch, but (for the most part) it’s left to a viewer’s imagination on how the legendary witch appears, which can be pretty scary and helps build tension and suspense throughout the movie, especially during the film’s final act.

Similar to a lot of long-awaited movie sequels of 2017 (Zoolander 2, My Big Fat Greek Wedding 2, etc.), Blair Witch faces the problem of being tardy. With a huge gap between Project and this film (17 years), it seems a bit “a little too late” to fully capitalize on the excitement the original 1999 film did, especially since Project has been spoof many times by various pop culture medias throughout the years. In conjunction with that, Blair Witch, while trying to honor its predecessor, may seem like it’s trying to mimic what was done before (just on a large scope). In truth, the narrative in this movie is tad identical to Project, which makes the film a bit predictable and following the first film’s formula. Even the film’s ending is reminiscent to the original (hint: a familiar place revisited). Also, I guess Wingard is trying to speak to the modern horror movie lover, as the movie utilizes a lot of the sudden “jump scare” tactics, which can become fun (in a scary way), but overstays its welcome from time to time. Personally, I didn’t really expect Blair Witch to be completely different to what Project was, but I did guess a lot and what was going to happen, whether from my memory of the 1999 film or from modern horror scare tactics.

While Project only had three main protagonist characters for viewers to follow (Heather, Michael, and Joshua), Blair Witch introduces a total of six main characters to follow. For the most part, these six fall into the standard / stereotypical characters that are commonly found in horror movies and are never fully fleshed out beyond what the plot designates them to be. Of all the characters, James and Lisa are the focal point of the feature, with Wingard position them to drive the narrative forward and given the pair the most screen time as well as the de-facto leaders of this so-called group. The characters of Lane and Talia, however, are oddly placed in the movie and don’t really offer that much to the movie’s narrative as if Wingard had a good idea to introduce them, but didn’t know what to do with them after that.

In terms of acting, each of the six cast members turn a serviceable performance in the movie. None of them over-act in the film per-say, but none of them will be nominated for an Oscar or Golden Globe for their roles in Blair Witch. All in all, the six characters in Blair Witch, while okay in terms of acting, are not “characteristically” emphasized beyond their introductory personas, leaving more room for supernatural scares than memorable characters.

Young adults, found footage, horrific supernatural events, and the legend of the infamous “Witch of the Black Hills” all return in the movie Blair Witch. Director Adam Wingard follow-up sequel takes what was liked in the original film and amps it up for a larger forest nightmare playground with plenty of scare / jump tactics as well as usage of modern filmmaking technics / technology to elevate from its predecessor, and (additionally) building upon “Blair Witch” lore. However, this film is, more or less, the same as what was done before as repetition does set in and familiarity from both Project and from the horror genres becomes commonplace. Personally, it was okay, a serviceable sequel to the 1999 original, and held my interest. I’m sure fans of the first movie and / or fans of the horror genre will want to see this movie, so I would say that I would recommend this movie, but its not made for everyone. Effectively, Blair Witch succeeds at what it aims to do, washing the sour taste of the deplorable Book of Shadows away, while reengaging viewers with memories of what made The Blair Witch Project famous. Whether or not you want to return to the haunted Black Hill woods is an ambiguous one; a question that’s just as the elusive as is the supernatural witch that dwells there.

Blair Witch  is rated R for language, terror and some disturbing images