Legendary filmmaker Hayao Miyazaki has made an illustrious career of animated films that are truly one-of-kind and forever timeless. From Howl’s Moving Castle, to Ponyo, to Princess Mononoke, and to the academy award winning Spirited Away, Miyazaki’s films have gained great affirmation and critical acclaim from critics and viewers alike. Now, with his journey in the cinematic world nearing its end, Miyazaki graciously bows out with his final masterpiece titled The Wind Rises. Does Miyazaki’s swansong film join the rest of his celebrated work or is it a black mark upon a successful career of storytelling? 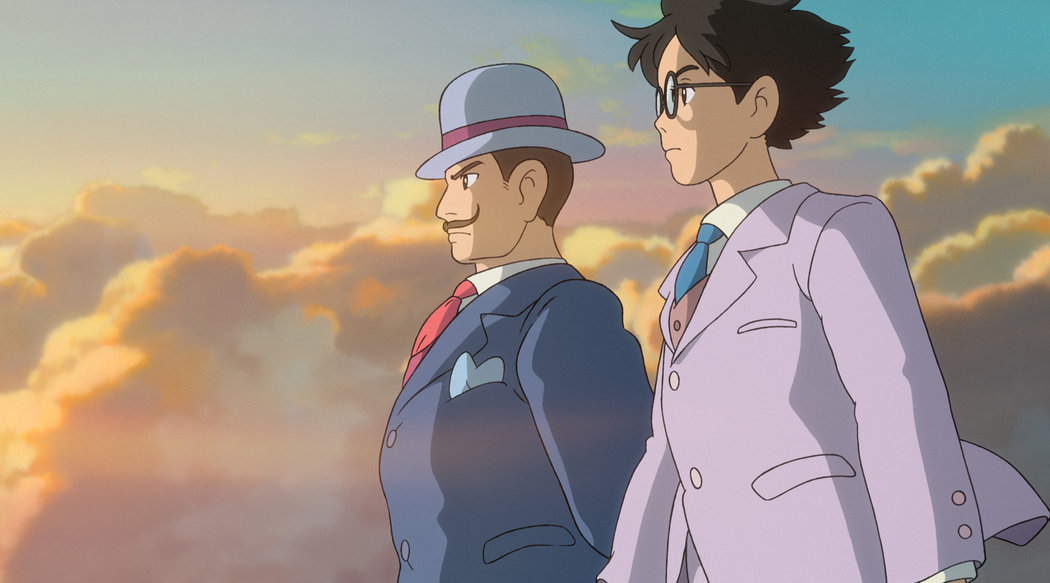 As a young boy, Jiro Horikoshi (Joseph Gordon-Levitt) has always dreamed of flight and of gracefully mechanized world of building airplanes. With his dream asserted and aspirations to become like his idol, Giovanni Battista Caproni (Stanley Tucci), a renowned Italian plane designer), Jiro sets his goals and education in the field of aero-nautical engineering. With time passing, Jiro procures a job at a airplane manufacturing company that is assign to develop a fighter plane that could help with Japan’s defense. While on much needed holiday, attempting to break his failure of faulty airplane designs, Jiro takes notice of the beautiful Nahoko (Emily Blunt) and falls in love with her. Yet, a deadly illness has stricken Nahoko as Jiro must balance his work and his private life hand-in-hand if he is ever to see his dream come alive.

During my teenage years, I began to Japanese anime (both movies and TV series), falling in love with animation style that was very much different from traditional American-based cartoons and movies. Although, I’m not a hardcore anime fan, choosing to listening to them in the English Dub version rather than the original Japanese version. In amidst of my anime fan-crazy, I remember coming across Miyazaki’s Princess Mononoke, having after heard it was really good in both animation and in storytelling. I actually did it like (a bit weird), but still good. After that, I watched several of his other projects, with Howl’s Moving Castle being my favorite one. Thus, this brings me to The Wind Rises as became accustomed to watching Miyazaki’s works (over the years) and was eager to see this movies, especially since this was his last film. After seeing it, I felt that The Wind Rises is absolute beautiful movie with an intriguing story to tell, even though it wasn’t what I was expecting to see.

Though gracious the film is, The Wind Rises is sort of a left turn for most fans of Miyazaki’s films as the story seems more grounded in reality than his others ones. Imaginative characters, vibrant realms, and mythical flights of fancy are replaced with a turbulent world of looming war, economical hardships, and a loosely fictional tale of a famous aeronautical engineer. History and chronology are the key factors that make up the film as Jiro grows up and experiences the great Kanto earthquake of 1923 (which is a very interesting sequence of the film), Japan’s trouble economy, and the ever-present foreshadowing of World War II (which is merely in the backdrop and sprinkled throughout the movie). Miyazaki, instead of exploiting wartime at its cruelest, shows viewers the discovery and joyful creation of crafting airplane from the drawing board to full fledge design.

The film also has a softer side, showcasing Jiro’s private life with Nahoko and the heart-wrenching illness that slowly begins to consumer utterly. Perhaps Miyazaki wanted to shake things up and create something a little bit more different for his final film. It’s a bold move (and maybe a tad bit slow in its narrative pacing), but I personally like it as I believe many will embrace it, while a few might cite it as a negative. Regardless of reality or fantasy, Miyazaki’s work speaks for itself as does The Wind Rises.

The animation for The Wind Rises is simply gorgeous per the usual Miyazaki’s style of Japanese anime. Its lush colors fills screen with hand-drawn details that truly a marvel to behold in an age of computer generated animated features. It may be slightly primitive compared to a Pixar or Dreamworks film, but it’s something precious to watch and fall in love with. The musical score for the film runs parallel with the paramount importance of the lush animation. Sequences of happiness, sadness, jubilation, and wonderment are perfectly emulated with unique music and melodies that can only come from a Miyazaki film; allowing viewers to get lost in the movie by both its visuals and its musical touches.

Much like Miyazaki’s earlier works, talented celebrities lend their voices to bring the colorful characters to life. Joseph Gordon-Levitt and Emily Blunt play the fated lovers of Jiro and Nahoko. Stanley Tucci voices the cheerful optimist Caproni to guide Jiro along his path (via dream sequences) as John Krasinski plays Jiro’s best friend and colleague Honjo. Martin Short plays Kurokawa, Jiro’s boss (whose comedic skills bring comedy to this feature), while Many Patinkin plays Hattori, the owner of the company that Jiro works for. Darren Criss, William H. Macy, Mae Whitman, and Werner Herzog also lend their voices to the film as well and are worth mentioning in this well-rounded cast.

The Wind Rises is terrific film that captures the spirit of aviation and the indomitable will to dream. It may be a little off putting for some with its slow pacing and a bit of a departure from Miyazaki’s previous works of fantastical elements and magical nuances, but the film is what it is…a masterful farewell piece. Its rich animation and well-crafted story takes to the skies; soaring high above other animated tales in its genre. It is truly a fine achievement that marks the final work of a renowned filmmaker. The world will fondly remember Hayao Miyazaki’s career; an enduring legacy of films that cultivates and invokes a profound sense of wonder with unparallel imagination and awe-inspiring storytelling.