MAN AND MACHINE BECOME ONE

Another golden oldie from my old movie blog. Enjoy! Giant monster and/or mecha movies are super popular in western society. From the famous yet kind of cheesy Godzilla movies to the flashy Japanese anime, this idea of larger than life creatures / robots has spawned a genre unto itself and has amass a large following of fans. This idea for movies is very sparse in America as it’s limited to only a handful of movies like Godzilla (the 2000 version), Cloverfield, and the Transformer movies. It’s clear that it’s not as popular as it is overseas as studios will usually forgo this movie genre and instead to do a genre that is more well-known to viewers of the American audience. Warner Bros and director Guillermo Del Toro have taken a chance with this idea and gives us Pacific Rim. Does this giant monster / mecha movie further open the doors for this genre to be more commonplace in movie theaters or is it a dazzling mess of a film that should destroyed by Godzilla himself? 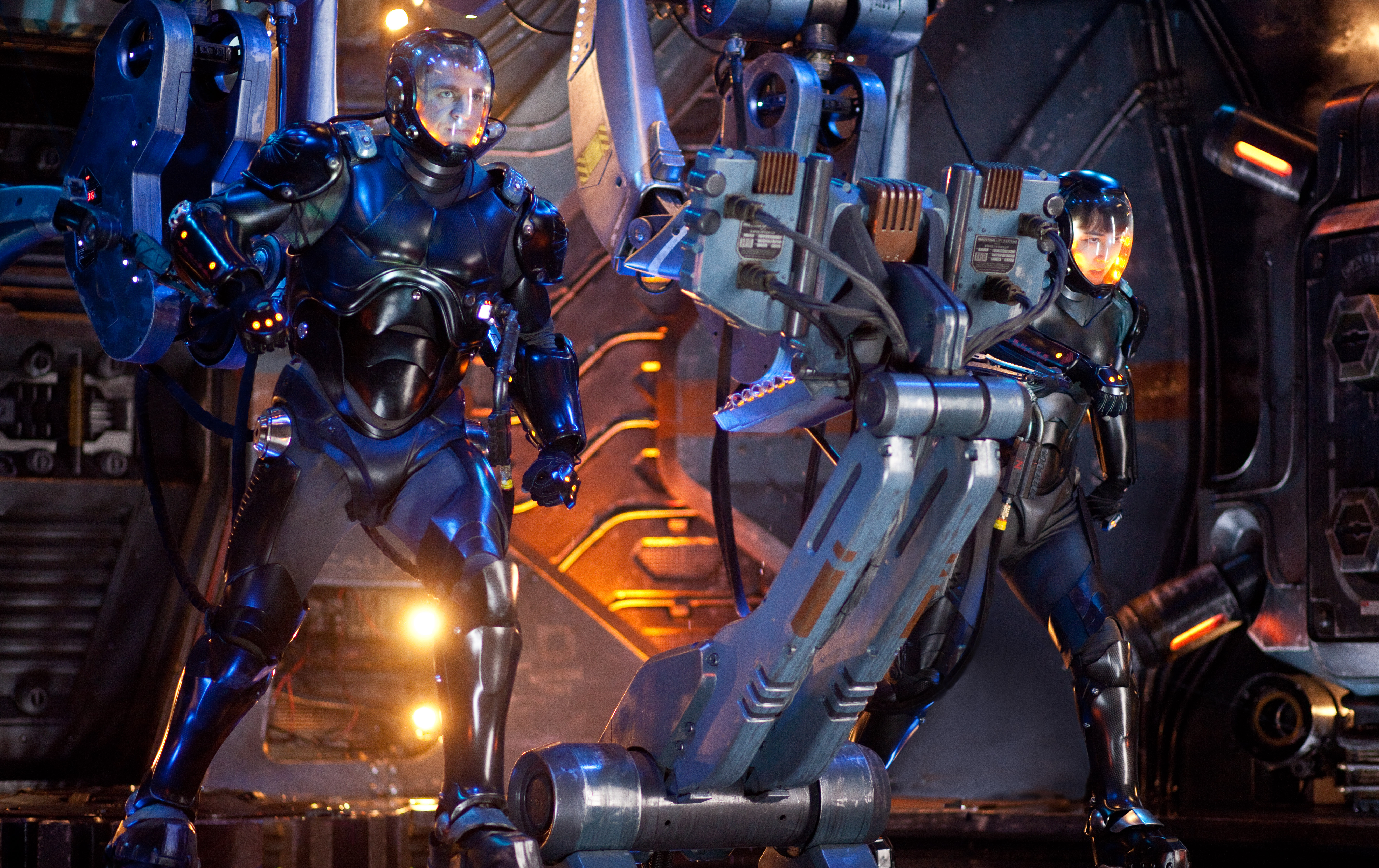 Life on earth has been shattered when an inter-dimensional rift in the Pacific Ocean opens up and releases gigantic monsters upon our world. These monsters, Kaiju as they are called, begin to wreak havoc everywhere; demolishing cities and devastating millions of lives. With conventional ways of fighting incapable of stopping them, the nations of the world come together and created (Jaeger) giant robots (Piloted by two humans) to counter this new threat, thus the Jaeger program was born. The movie follows Raleigh Becket, a former Jaeger pilot whose older brother Yancey (Diego Klattenhoff), who was Raleigh’s co-Jaeger pilot, was killed in their last battle with a Kaiju monster. Haunted by this horrific event, Raleigh has left the Jaeger program and has lived out his days helping out with the construction of Anti -Kaiju wall to protect the cities and populace from the giant monsters. His life, however, is changed when Jaeger programs fearless leader Stacker Pentecost (Idris Elba) convinces the former pilot to return to active duty. With a plan set for a final attempt to permanently close the rift between worlds and the Kaiju threat, Raleigh and his new co-pilot Mako Mori (Rinko Kikuchi), a young woman who shares the same equal loss as himself, and handful of other Jaeger pilots must find the courage to put personal feelings aside (both physical and mental) and work cohesively with each other to save the world from the impending apocalypse.

I’m not a huge fan of the old-school Godzilla movies (wasn’t my thing), but I’ll admit that I like anime. I’m not a uber anime manga nerd, but I am fan of them. Thus, I’ve seen plenty of them (mostly when I was in my teenager years). Of course, I saw a lot of the iconic “giant robot” ones like the Gundam franchise (Gundam Wing and Gundam Seed are favorite) as well as Neon Genesis Evangelion. On the “American” side, I did see Cloverfield (found it to be somewhat interesting) and the Transformer movies (good, but not ultra-great. Definitely something for summer blockbuster fanfare). Because of all these things, I was initial excited to see Pacific Rim. I mean the trailer looked cool with giant robots and monsters fighting each other. That alone sold me to see this movie in theaters. Walking out of the theaters, I believed that Pacific Rim , while having some problems in its undertaking, is definitely a summer popcorn feature with a lot of sci-fi “big, bang, boom” throughout.

Pacific Rim is directed by Guillermo del Toro, who is known for his more imaginative creations such as Pan’s Labyrinth and the Hellboy movies. Pacific Rim allows dele Toro to expanding upon his creativity as the feature is very much alive with some of his “best work” being displayed on-screen for a big-budgeted feature. By far, Pacific Rim’s greatest thing going for it is its top notch visuals as the movie is filled with vibrant colors and spectacular CGI that could rival any summer blockbuster movie this year. I saw the movie in IMAX 3D and trust me it was worth every penny and it truly comes alive in his ways that at 2D version cannot achieve. The imagery is breath-taking and the sounds are blasting. Definitely worth it.

Guillermo del Toro’s direction also goes down conceptual art for Pacific Rim, with set designs and layouts looking exquisite and intricate from scientific labs to cityscapes that are ruined from battling giant monsters. Even the design work from the monstrous Kaiju creatures to the mechanical layered Jaegers, the sheer level of design that dele Toro put into these beings is truly uncanny and definitely a geeky fanboy’s dream. The fight themselves are super cool. There big, loud, and full of destruction and mayhem that feels reminiscent to an old Godzilla movie. From the sea, on land, and into the sky, the battles sequences are truly a highlight of the film. Then there is a concept of “Drifting” (the merging of the two pilot’s minds to operate the Jaeger robots). At first, I wasn’t sold on the idea as two or more pilots (One Jaegerhas three pilots) seem too similar to Voltron or the Megazord from Power Rangers. However, it worked well in the movie and came across as clever and interesting to me. 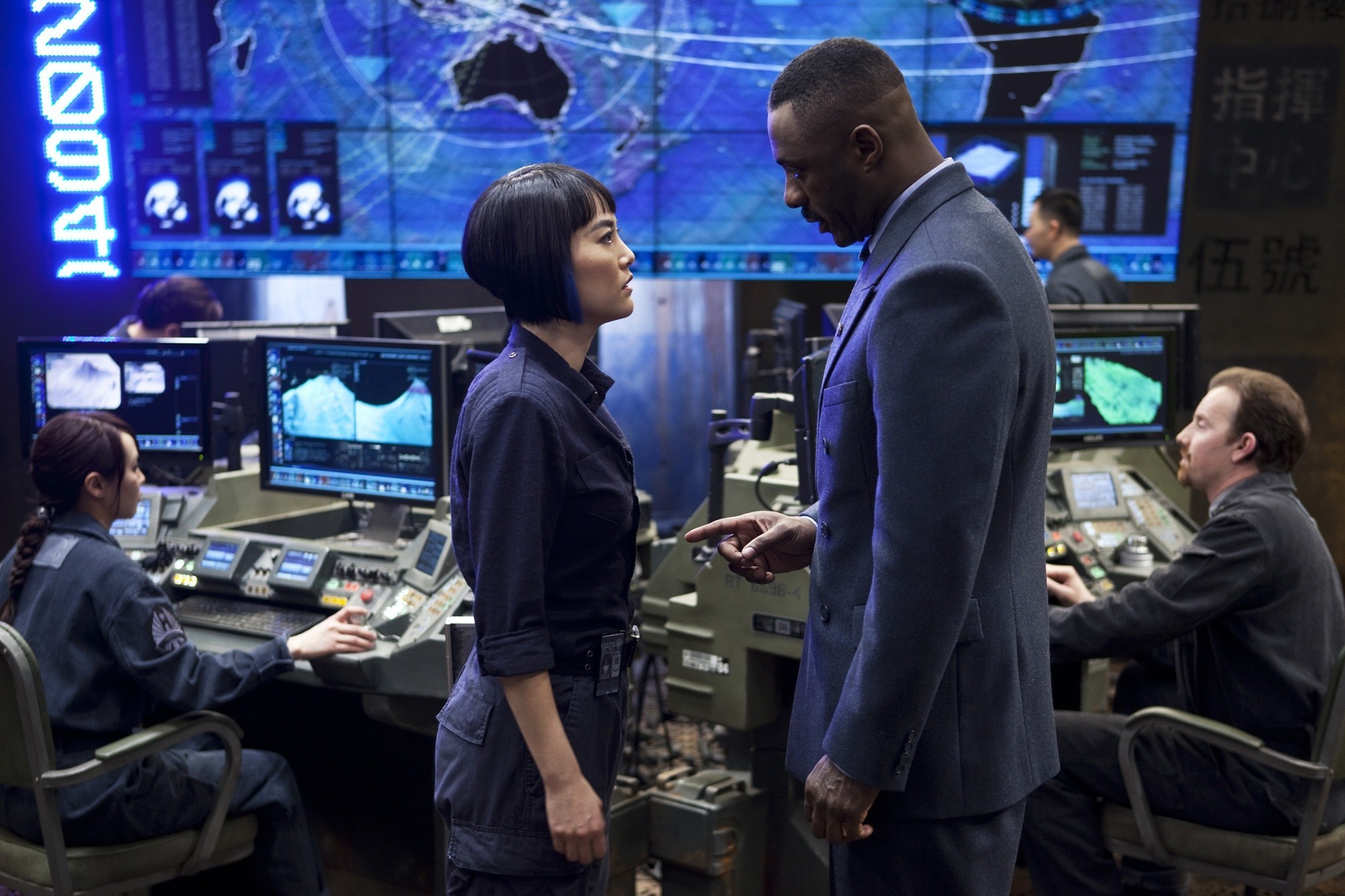 Walking into this movie I had already surmised of some potential problems with Pacific Rim. First, much like how I stated that Pacific Rim’s greatest moments are during the Kaiju / Jaeger battles, the same cannot be said for when the humans take over on-screen. Of course, this brings the “humanity” quality to the film, but it sort of takes away from the grand spectacle of the movie, which many came to see and basically is picked down to three major battle scenes (one in each act). Coinciding with that notion, Pacific Rim’s main problem is that I felt was in the story / character development. While the initial premise of the film is solid enough, the film’s script (written by dele Toro and Travis Beacham) is less unimpressive than its boisterous CG visuals. Story-wise, it’s a straightforward narrative, but ultimately gets bogged down with too many side stories (the anti-Kaiju wall and the decomposed toxic known as “Kaiju Blue”, the somewhat origin behind the Kaijus, etc.). Then there’s character development, which also serves too many masters, with a sprawling cast of supporting characters; who some having their own minor subplot story for the film to circumnavigate through. Thus, most become flat and / or common cliché archetypes (the gruff leader, the son with “daddy” issues, the cannon fodder, the characters with tragic pasts, etc.). Again, I kind of sort of knew to expect this in the movie as it is a summer blockbuster feature, meaning its more heavily on the spectacle rather substance.

As a minor complaint, the fight scenes, though visually impressive, are, at some points, a little bit obscure by the usage of rain and/or water during the duration of the battle. I understand it adds more dramatic yet subtle effect to the battle, but it’s fuzzy to the eye at certain points in those scenes due to the deluge of water everywhere as it doesn’t let you fully take in the meticulous detail of design and the titanic battles of both the colossal Jaegers and the monstrous Kaijus.

The cast of Pacific Rim is a great one, with several recognizable faces popping in and out of scenes. The problem, like I said above, is that there’s so many that it’s hard to create a good characterization for this sprawling cast. Fans of the hit TV show Sons of Anarchy like definitely like Charlie Hunnam as the film’s main protagonist Raleigh Becket. Hunnam looks and acts the part of a seasoned Jaeger pilot and gets the job done as the movie’s lead role. Co-staring with him is actress Rinko Kikuchi, who plays Mako Mori, Raleigh’s new Jaeger co-pilot, who also has been interesting backstory. Both Hunnam and Rinko Kikuchi deliver solid performances, but, beyond the first confrontation and another scene that follows, the pair (as characters) don’t have a strong conflict or character arc to be fully fleshed out. I also wished they expanded upon the emotional traumas that happened to both Raleigh and Mako. They’re both haunted by their own horrific events as it is shown in the their first “Drifting” trial inside Gispy Danger, but after that it’s kind of like one and done for both of them. It would’ve been cooler to see them both panic and sort of confront their own fears in the heat of the third act’s battle, but sadly they don’t, getting pushed a bit as they become a tad bit less unimportant.

Perhaps the best (and most dynamic) character role in the movie goes to Stacker Pentecost, played by actor Idris Elba. Elba’s physical presence on-screen is clearly seen as he takes command, dominating all the scenes that he’s in and breathes life into a character that could’ve been done in a clichéd manner. Clearly, Elba’s Pentecost is the most well-rounded and engaging character arc in the whole cast of Pacific Rim. Other noteworthy supporting characters, include Max Martini and Robert Kazinsky as Herc and Chuck Hansen (the father / son pilots behind the Australian Jaeger Strike Eureka), Charlie Day as Dr. Newton Geiszler and Burn Gorman as Dr. Gottlieb (the two conflicting research scientists in the Jaeger program), who both bring their fast-talking comic relief to the movie as well as the funny yet slightly over-the-top performance of Hannibal Chau (A Kaiju’s black market dealer) played by Ron Pearlman.

Lastly, dele Toro cultivates a “believable” mythos and world-building to Pacific Rim’s proceedings. Like many would guess, the movie infuses several winks and nods to anime and “giant monster” troupes that makes it distinguish enough that it doesn’t feel like a rip-off, but rather its own identity. Pacific Rim never veers complete off course from its intended goal and, with dele Toro’s imagination, will mostly likely please “western viewers” as well as its giant monster fans. Basically, it’s the closest balance between Japanese anime / movies aesthetics and American style influence.

Just like how any good wine aficionado would say “Certain wines have an acquiring taste to them”, such is the case with Guillermo Del Toro’s Pacific Rim. It’s a movie that may not be to everyone’s liking. To simply put it, if you walk into the movie and know what to expect from it and like the idea of giant robots and monster fighting each other, then you will thoroughly enjoy Pacific Rim. The opposite can be said if you go into it expecting something much more. No, this is not a thought-provoking film that hides a deeper meaning within its contexts and the closes this movie will get to the getting nominated at the academy awards is in the technical categories (probably in Best Visual Effects). My personal take on Pacific Rim is a positive one. Though it stumbles in its character development (something I sort of expected), Pacific Rim excels in its visuals giving viewers a dazzling epic sci-fi summer movie that will surely please that little geeky fan boy in all of us.

Pacific Rim  is rated PG-13 for intense sci-fi action and violence throughout, and brief language