Teenage Mutant Ninja Turtles: Out of the Shadows Review

OUT OF THE SHADOWS

AND INTO THE FRYING PAN

In 2014, the four iconic ninja turtles (Leonardo, Raphael, Michelangelo and Donatello) made their newest big screen iteration with the Jonathan Liebesman’s Teenage Mutant Ninja Turtles. Reimagined as another origin story of sorts, the movie followed April O’Neil, a young amateur journalist, as she encounters four mutated anthropomorphic turtles, who have been training in the ways of the ninja, and battle against the evil Foot Clan, led by their leader…Shedder. While cult following behind the Turtles has been palpable with its fans over the years, Teenage Mutant Ninja Turtles was faced with mixed reviews. Some embraced it, while other (including me) felt that the movie was, more or less, a noisy hodgepodge mess. Despite that, the movie went on to gross almost 500 million at the global box office, which seemed to be enough for a sequel film to be greenlit. Two years later, the Turtles are back heading back to the big screen for their sequel Teenage Mutant Ninja Turtles: Out of the Shadows. Is this second installment worth seeing or is it “cowabunga” flop? 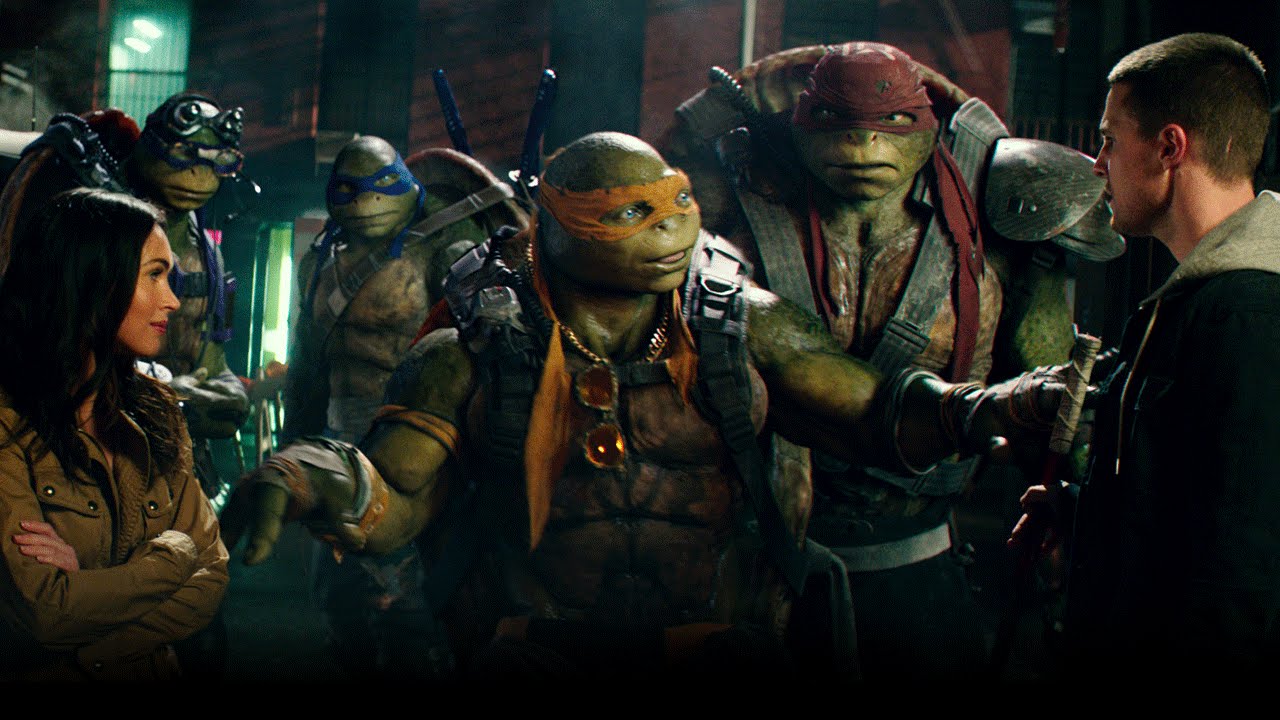 I will personally say that I didn’t like the 2014 version of Teenage Mutant Ninja Turtles, feeling it was a haphazard reboot that was just trying to capitalize on the TMNT brand with this up-to-date feature. It was sloppy, kind of nonsensical (I mean April raising the Turtles when she was younger…seriously?!) Thus, I gave the movie a low score (see my review for Teenage Mutant Ninja Turtles). And then when I heard that they were making a sequel to the 2014 TMNT movie, I kind of blew it off, believing that it was going to be just as stupid and bombastic as the last one. However, after seeing some of the trailers for Out of the Shadows, my interest to see was a little peak to see. So, seeing if the movie is any good, I decided to go see in theaters. What did I think of it? Well, Teenage Mutant Ninja Turtles: Out of the Shadows was an improvement than the first movie, but it’s still not incredibly great.

With Jonathan Liebesman not returning, director Dave Green, who previously directed the movie Earth to Echo, steps in to helm Out of the Shadows. Green makes some smart decision in directing this feature, most notably in making it the feature, more or less, share similarities to the 1987 cartoon series. While the 2014 Ninja Turtles movie was more “ground” and “believable” (and trying to overcomplicate things about the Shedder, his Foot Clan army, and the earl relationship between April and the Turtles (which is still odd to me), Green takes Out of the Shadows into a more surreal cartoon “fun” aspect with the Turtles and the narrative going off on a more “over-the-top” adventure. Like I said, fans of the 1987 animated series will most likely like this movie as several characters from the cartoon series make their big screen debut. I was fan of 1987 series (watched it all the time when I was growing up), so that’s a big positive for me in liking this movie. In short, Green attempts to capture the spirt of the classic 1987 TMNT with Out of the Shadows and, for the most part, succeeds, bringing more fun and entertainment value than did Liebesman.

In terms of action, Out of the Shadows is more “balls-to-the-wall” with its action, showcasing a great river battle with the Turtles facing off against Bebop and Rocksteady than starts off with a daring skydiving jump. Truly, the film’s visuals are mostly solid, without only a couple of shots that are blotchy. However, for the most part, the movie’s visuals are pretty good (not over-the-top awesome, but still good). Again, if you didn’t like the first movie because it had more drama than action, then Out of the Shadows changes that up, providing more blockbuster action to the proceedings.

While I did say that the movie was improvement to the 2014 Ninja Turtles movie, Out of the Shadows is still far from perfect. While it shares similarities to the 1987 TMNT show, the movie is really overstuffed with almost everything, except a strong narrative. There’s a lot going on with already established characters, new characters, and a lot of going here and there. It does get a little convoluted at times and the movie doesn’t slow down to help development some of its characters (see Casey Jones and April O’Neil down below), with several gaping plot holes in the film’s narrative. Also, Out of the Shadows relies too much on its action, sacrificing a good wholesome story for popcorn action. Basically, fans of the TMNT franchise will probably like Out of the Shadows, but casual moviegoers will probably find that this movie is still boisterous with big time action and a weak story.

One of the greatest aspects of Out of the Shadows is the Turtles themselves. Similar to how Liebesman did in the first movie, Green builds upon what was established (in 2014 movie) and expands upon the dynamics of the four mutant brothers. They have more conflict with each other; sort of discovering their own “identity” amongst themselves, their place in society, and their places as brotherly team. Out of the Shadows also spends more time with the Turtles, given them each a moment to shine in the spotlight, whether in character building, action scene, and dialogue sequence. This, of course, makes the Turtle themselves feel more like characters rather than caricatures. Each of the four actors who play the Turtles (Pete Ploszek, Alan Richson, Jeremy Howard, and Noel Fisher) helps bring these characters to life.  As a side note, Tony Shalhoub reprises his role as voicing the Turtles’s wise sensei Master Splinter.

Beyond the Turtles and Splinter, Out of the Shadows sees the return of April O’ Neil and Vern Fennick, played by Megan Fox and Will Arnett respectfully. With the movie being less focused on the character of April on more on the four Turtles, Fox’s O’Neil is given less to do in Out of the Shadows. Sure, she’s present, still shares her relationship the guys (the Turtles), and has some little more light-hearted moments than the first installment. However, that being said, Fox’s is still a little bit awkward fit for April O’Neil. Similarly, Arnett’s Vern is more in the background in this movie, but, thanks to his charismatic performance, gets the job done and certainly does outshine Fox’s performances (in terms of acting and comedic timing).

With the trailers and promos for Out of the Shadows, showcasing the first appearance for Casey Jones, the hockey-loving vigilante, in this new TMNT movie franchise will have mixed feelings. Played by Stephen Amell, most for his role on the television series Arrow, Jones is a good fit, who is likeable throughout the entire movie, but isn’t given that much to do. Amell put his own signature stamp on Jones, but it isn’t a strong impression. In truth, it’s kind of hard for me to see Amell as anything beyond his role of Oliver Queen from Arrow. Thus, for better or worse, Amell’s Jones in the movie, but its not as strong as many would like see the fan-favorite character be.

On the villain side, Out of the Shadows sees iconic characters of Bebop and Rocksteady making their first big screen debut in a live action movie. How were they in the movie? Well, going along the lines of the movie serving up fan service to the 1987 animated series, they were great. Just like how I remembered them from the cartoon, the pair were loud, rambunctious, and disgusting in nature. Both actors, Gary Anthony Williams as Bebop and Stephen Farrelly (Sheamus from the WWE) were both great as their human characters and their mutated persona as an anamorphic warthog and rhino. The movie also introduces two more additional characters that were in the 1987 cartoon, including Baxter Stockman and General Krang. Played by actor Tyler Perry, Baxter is a fun (yet stereotypical) bad guy scientist that, given Perry’s performance, has enough likeability to the character. Hopefully there will be more of him in they decide to make future installments. As for General Krang, it’s a mixed feeling I have. The character seems to be thrown in there, with an updated look from cartoon to live action, but the huge and villainous brain with his exo-suit body is, more or less, a hollow bad guy that seems a little comically hokey than a titular threat to the Turtles. It’s definitely eye-catching for the movie to see him, but not a memorable villain. As a side note, Brad Garrett does the voice for Krang and, while it gets hit, it just seems odd to hear Garrett’s voice as Krang. Maybe it’s just me.

The movie also sees the return of Shedder and his right-hand “hench woman” Karai. However, both characters have been recast for Out of the Shadows, with Brian Tee as Shedder (replacing Tohoru Masamune) and Brittany Ishibashi as Karai (replacing Kelly Hu). In addition, both characters are more on the “backburner” in this feature, which is disappointing. Rounding out the cast, there are a couple of recognizable faces in Out of the Shadows in some minor roles, so keep your eyes opening for them. Lastly, actress Laura Linney plays Police chief Rebecca Vincent in the movie, and while it’s kind of interesting to see the 52-year-old actress in Out of the Shadows, her character doesn’t have that much to do than to be the straight-faced / tough police chief.

As a final note, I did see Out of the Shadows in IMAX 3D (well, Regal’s RPX 3D, which is kind of the same thing). As I said, Out of the Shadows is bigger than the first Ninja Turtles movie, so the set pieces and action oriented scenes are more eye-popping and are made for the 3D (especially the character of Krang) and large format experience for amped up sights and sounds.  Thus, as usual, the choice for a purchasing a premium ticket to see the movie (if you see it in theaters), is entirely on your preference… and maybe your wallet.

Everyone’s favorite turtles are back in Teenage Mutant Ninja Turtles: Out of the Shadows. Green’s movie is kind of sort of self-aware of what its wants to be a (a fans service to the 1987 animated cartoon) and succeeds at being superior to its 2014 predecessor in a lot of category, making the feature that much more enjoyable. That doesn’t make this film perfect as it still plague with pacing, story, and the juggle of characters (both new and old). Personally, despite some glaring problems of story vs. action, it was definitely better than the last movie (actually might buy this one when it comes out on Blu-Ray). In truth, it’s really a tossup (an iffy-choice) as to seeing this movie. If you’re a diehard fan of the Turtles (or of the first movie), there’s plenty to like about Out of the Shadows, while causal moviegoers might not care to see “heroes in a half-shell” return again to the big screen. In short, Teenage Mutant Ninja Turtles: Out of the Shadows has nostalgia, over-the-top action, and lacks a strong narrative, which translates into being a standard summer blockbuster type movie through and through. Whether or not you partake in the film’s sequel proceedings about four “mutated ninja turtles” is entirely up to you.

Teenage Mutant Ninja Turtles: Out of the Shadows  is rated PG-13 for sci-fi action violence