Eye in the Sky Review

NEVER TELL A SOLDIER THE COST OF WAR

How does one (in any of the military branches) handle a hostile condition concerning loss of life or the proper handling of an elevated mission? What is the best course of action? In layman’s terms, the “Rules of Engagement” (aka ROE) are a set of rules or coherent directives to military forces that define specific situations, circumstances, and scenarios in which to use the appropriate course of action when engaging an enemy / situation in a more “proactive” execution. Whether good or bad, the ROE provides the authorization / restrictions of military personnel to conduct a lawful military action (a sort of Code of Conduct), protecting them from after action consequences on themselves. In keeping with its authenticity, theatrical feature films have used the “Rules of Engagement” scenario as a catalyst to heighten scenes of military tension / drama. Such is the case with director Gavin Hood’s newest military movie Eye in the Sky. Does this film find its target or is a cinematic military misfire? 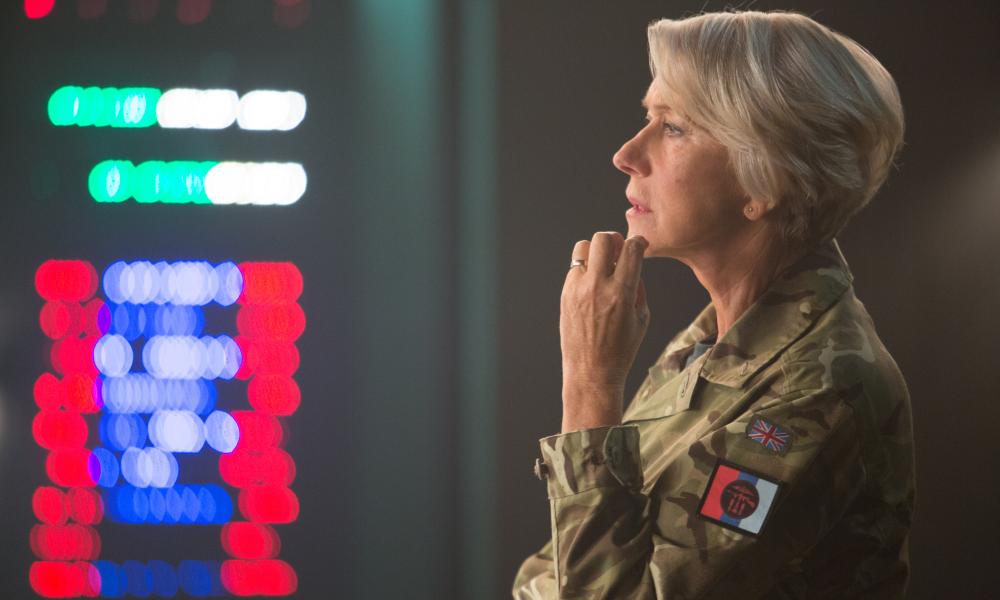 Working in the British military branch, Colonel Katherine Powell (Helen Mirren) heads a top secret drone operation, targeting her mission in Nairobi, Kenya where a secretive meeting of high-level Al-Shabaab members, a Somali terrorist organization, is about to take place, including two British citizens and one American. In a joint-operation with the U.S., Los Vegas-based USAF drone pilots Steve Watts (Aaron Paul) and Carrie Gershon (Phoebe Fox) monitor the mission via a drone craft, acting as Powell’s aerial surveillance, while local Kenyan agent Jama Farah (Barkhad Abdi) aids the mission by working aps ground surveillance. Within time, Powell and her team discovers (via Jama’s short-range camera drone) a high-risk scenario, changing the mission’s situation from capture to kill. This prompts the officials in London into a corner where Lt. Gen Frank Benson (Alan Rickman) pushes for the go-ahead permission that is needed for Powell’s team to strike via missile strike. Unfortunately, his fellow colleagues are at a standstill, seeking permission from Foreign Secretary James Willett (Iain Glen) and upward on the matter at hand. As the debates ensues, Powell’s frustration grows, demanding her team to strike before it is too late. To further complicate the mission is Alia (Aisha Takow), a young Kenyan girl enters the situation by selling local bread in the area of the potential kill zone range.  Ali’s placement in this mission further debates the ROE, asking is saving one child worth the potential death of hundreds or should the child be written off as collateral damage?

This is usually part in my blog review where I mention something personal that reflects the movie or my opening paragraph as a way to engage my readers. Unfortunately, I am not in the miltary (I am a citzen) so I cannot real discuss / debate the values and the legality behind the usage of the ROE without upsetting somone (or accidentally inserting my foot into my mouth). As for Eye in the Sky. I actually did not see the movie trailer in theaters (only seeing a couple of TV spots) and I just waived if off as a movie that I might see later on (as a rental). I read a couple of reviews for the movie (mostly positive), so one day, when I had some free downtime, I decided to the check the movie out at my local theater to see what the hype was about. After seeing it, I feel that Eye in the Sky is a thrilling drama, with a great cast, that theatrical discusses the usage and terms of the Rules of Engagement.

Eye in the Sky is directed by Gavin Hood, who previous directorial work includes X-Men Origins: Wolverine and Ender’s Game. Hood seems to know how draw the movie’s intended viewers into this world, drumming up sympathy and emotion with delicate scenes (especially those ones dealing with the young Kenyan girl Ali). There’s also plenty of military / espionage tactics at work throughout the course of the feature, keeping a viewer on its toes at what’s going to transpire next. The movie moves at brisk pace, clocking in at around 102 minutes (a relatively short feature), but it doesn’t feel that short, proving to be engrossing, captivating, and brilliantly intense. Like 10 Cloverfield Lane, Eye in the Sky doesn’t focus on the events of its cast of characters backstory, but rather on the events that are taking place currently. Giving that’s how the movie is presented, it’s not a bad thing and kind of helps it, steering the narration towards the “main story” at hand rather than unimportant side-stories. Overall production for Eye in the Sky with believable set designs, locales, and military terminology (at least in the movie world).

Given the nature of the movie’s narrative, Eye in the Sky touches of the subject of the rules of the ROE. There’s plenty of heated discussions / debates throughout the course of the movie on the moral issues and rightful action that need to take place to complete the narrative’s mission. It certainly does open a viewer’s mind to that legality of it all (especially with modern usage of drone attacks) as Eye in the Sky really doesn’t choose one side or the other (pro-war or anti-war), but shows both sides and leaves the ultimate judgment decision to its character and (by proximity) to its audience members.

If I had to complain about Eye in the Sky, I would say that it has many “moving parts” to work with and, if you think about it, it really does. As I said above, Hood creates a blow-by blow account of how this mission as it unfolds with new revelations and hard choices. Thus, the screen is constantly switching back and forth between Nairobi, London, Sussex, Las Vegas, and Hawaii, given each of its characters time to react to the situations that play out. It’s an interesting notion to see how it plays out, but it’s sometimes seems a little too hard for Hood to juggle, which causes the film to stumble slightly. In addition, while its narrative is based on the principles of the govern terms and rules of the ROE, it’s a little bit of a “stretch” (even in a movie world) that all these hard choices that Powell and her team face are conveniently placed in front of them and that no one of the “higher ups” don’t want to cast their final decision on that matter (i.e. always referring up). I know it adds to the heightened drama of the overall movie, but it may not completely make a viewer buy into the movie’s believability.

The cast in Eye in the Sky is a talented and diverse group. Of course, actress Helen Mirren leads the charge as the steely and determined Col. Katherine Powell. Mirren, whose acting talents have given her meaty roles (see The Queen, The Hundred-Foot Journey, and Woman in Gold), handles her roles as Powell with her masterful dramatic poise and is a great addition to her ever-growing body of work. Behind Mirren is American actor Aaron Paul who really does shine, displaying his dramatic acting chops as USAF drone pilot Steven Watts, a character who’s caught between the mission at hand and his own moral judgment. I was actually surprised at Paul’s performance in the movie. Then, of course, there is late Alan Rickman (RIP, Mr. Rickman) who plays British Lt. Gen Frank Benson. Like Mirren, Rickman masterfully commands his scenes with grace and dignity (even providing some light comic relief with his character), while also delivering one of the film’s final lines that haunt a viewer to their core. As side-note, this is Rickman’s last physical on-screen performances as lent his voice in Disney’s Alice Through the Looking Glass, which will be his last role as the Blue Caterpillar Aboslem.

Game of Thrones star Iain Glen lends his weight (and a little comic relief with a bout of food poisoning) as James Willett, Britain’s Foreign Secretary, while Captain Phillips star Barkhad Abdi proves to be very effective as Jama Farah, Powell’s eyes on the ground in Nairobi. I also can’t forget to mention Aisha Takow’s role as the young Alia, who really does good a job in the movie, acting as the real emotional part of the feature for its viewers. The rest of the cast, including Jeremy Northam as Brian Woodale, Phoebe Fox as Carrie Gershon, Richard McCabe as George Matherson, and Monica Dolan as Angela Northman, give solid performances in the movie, despite their limited screen time. Decisions of mortality and the right course of action are the heated questions asked in the movie Eye in the Sky. Director Gavin Hood paints a minute-by-minute narrative that intensely gripping and theatrically entertaining. It may stumble while juggling its multiple locations and its ultra-heightened scenario, but with an intriguing story, a talented ensemble cast, and interesting platform on discussing the rules of the ROE, Eye in the Sky is surely a military / political drama worth checking out. To me, it was really good as I liked it more so than what I anticipated it to be. Thus, I would recommend stamp of approval. Echoing to what I said earlier, whatever your stance is on the military’s Rules of Engagement, Eye in the Sky is a cinematic demonstration of its usage and consequence of its application in terms of action, reaction, or even inaction.