Over the years, video games have evolved with the growth of modern technology. From 2D side scrolling games to the fully rendered 3D platformers, video games have transcended and adapted with the ever growing advance in computer graphics. One of these aspects that has been developed in gaming history is the first person POV (point of view). While isn’t not something recently conceived (see classic video games like Myst, Doom, and Goldeneye), but is utilized in most of today’s FPS (First Person Shooters) with the game dropping the player into the main character’s perceptive. Interestingly, the world of movies has incorporated this POV in certain movies, but only for a brief moments and for certain scenes. Now Ilya Naishuller takes this first person POV method from video games and adapting into a full-length feature film titled Hardcore Henry. Is this experimental film worth seeing or is its video game atheistic to gimmicky and nauseating to watch?

Waking up and plugged into a computer system, Henry takes in his unknown surroundings, finding some his limbs appendages missing, with the mysterious woman Estelle (Haley Bennett) appearing before him. Claiming to his wife, Estelle helps completes Henry’s transformation into a cyborg and is about to install his voice module when the telekinetic supervillain, Akan (Danila Kozlovsky), finds the pair, forcing the two to flee for their lives. With Estelle being captured by Akan’s men, Henry is escapes, battling his disorientation within his new body and surroundings, eventually find help from Jimmy (Sharlto Copley), an ambiguous and strange man capable of regenerating into different personalities. With Jimmy’s help, Henry arms himself and goes into kill mode, fending off waves of Akan’s soldiers as he inches closer towards killing this powerful villain (uncovering Akan’s master plan in the process) and saving Estelle from his clutches.

Like most of my generation, I do play video games. I’m not full-blown “hardcore” gamer, who spends his day in a virtual world, but I’m more of a causal gamer, picking up the video game controller from time to time. Personally, I choose more games have story over action, allowing myself to be immerse within its virtual world for a brief time. I’m a huge of RPGs (Role-playing games) or even platformers. Thus, I’m not complete fan of first person POV shooting games as they (for the most part) lack an engrossing narrative and are simply presented with a “combat action experience” over an engaging story to tell.  Sorry, I let my video game nerd out (I’ll put him away). And now…back to the task at hand. I remember one of my friends posted the trailer for Hardcore Henry on Facebook and I was curious to see it. I didn’t know what to make of it, but it peaked my interest enough to see it over its opening weekend. What did I think of it? Well, Hardcore Henry is definitely unique and ambitious, but it really never goes beyond its “Big, Bang, Boom” premise, falling to capture a compelling story or its characters as a drama.

Hardcore Henry’s director is Ilya Naishuller. Interestingly, the movie was inspired by Naishuller previous work on the Russian indie rock band (Biting Elbows) music videos, titled “The Stampede” and “Bad Motherf***ker”, which (like Hardcore Henry) were shot from a first person POV. While there’s been plenty of movies that have mimicked this first person POV, there hasn’t been a movie that utilized this style of camera work for entire movie (at least to my reconciliation and knowledge of movies). So right off the bat, Hardcore Henry has a very different approach than other movies, offering a very intriguing cinematic experience (albeit an experimental one).

The only problem is that the camera work becomes jarring at times, with scenes happening so fast and frenetic that a viewer’s perception gets blurry (as if you don’t want what you are watching). To me, it became bothersome at some points and (along with its action) made feel me sort of numb. In short, Naishuller’s film is ambitious with its GoPro 3 camera work, but it sometimes wonky angles and overall okay camera resolution overstays its intended welcome. As cautionary warning, those prone motion sicknesses might get a tad bit nauseated when watching Hardcore Henry.

Like the scenes from its movie trailers, Hardcore Henry promises a lot of brawling action scenes with bombardment of frenzy violence (some are pretty gruesome to behold). Its brutal, visceral, and relentless throughout with Henry using various guns, weapons, and objects to eliminate his endless supply of enemies that are pursuing him. As a cautionary reminder to my viewers, the movie is rated R for a reason and should not be seen by young tweens, who play first person POVs video games. 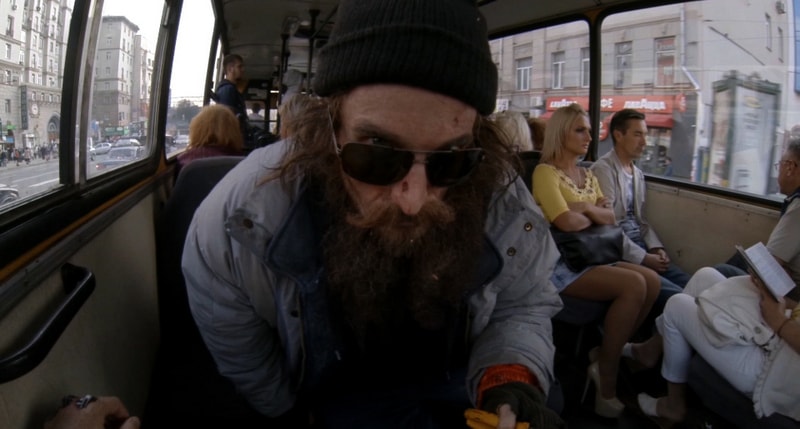 From the get-go, it’s clear that Hardcore Henry is clearly aimed at mimicking a first person shooter video game, both in visual style and storytelling format. Thus, fans of popular gaming franchises such as Call of Duty and Battlefield will most likely be drawn to into the movie’s unique representation. That being said, the movie feels too much like a video game, with familiar plot points playing throughout (i.e. starting the story with the main character who has no idea of who he is and where he’s at, a weak love interest, and super maniacal villain who pursuers the main character, etc.). It all plays to the standard video game troupes, but it becomes pretty bland after a while to the point of being slightly predictable with film’s twist at the end. Coinciding with that, Hardcore Henry’s script, which was penned by Naishuller and Will Stewart has a shell of story, focusing more on the grisly action scenes than the movie’s world and the story at hand. I kind of knew it was going to be like that, but I was still expecting something a little more of a stronger narrative. I mean even the video game Call of Duty 4: Modern Warfare has more of a story than Hardcore Henry.

While its action and violence permeates the entire 96-minute runtime of the movie, Hardcore Henry’s theatrical performances are not the key highlight of the feature. While Henry himself is presented through a viewer’s perception, the only truly standout role is Sharlto Copley. Copley, who’s mostly known for starring in Neil Blomkamp’s sci-fi movies, plays the role of Jimmy, a character who changed his personality several times when Henry encounters him. Keeping up with the video game aesthetic, Copley’s Jimmy is, more or less, acts like a video game’s NPC character (non-playable character), helping the main character out (Henry) with his mission and offering a bit of plot points along the way. Regardless if you like him or not, Copley is the most character developed in Hardcore Henry.

The other two notable characters comes from Danila Kozlovsky and Haley Bennett, respectfully playing Akan and Estelle. These two are more on the weaker side of the movie as Kozlovsky’s Akan the film’s antagonist (villainous and super powerful individual) is just downright cartoon-ish in all every aspect (over-acting and hamming his lines in every scene he’s in), while Bennett’s Estelle is pretty much the generic and stereotypical DID (damsel-in-distress) role. Lastly, actor Tim Roth plays Henry’s father (via Henry’s flashbacks). There’s not much to his character, but Roth’s small presence slightly lends weight to the otherwise thinly written narrative.

To put it simply, Hardcore Henry is a curious movie. Naishuller’s experimental film project is definitely ambitious (to say the least), displaying a visceral non-stop barrage of on-screen action and violence within a first person POV. And yet, despite that, the movie falls short as a whole, leaving a jarring hollowed feature that’s lacks theatrical character development while its blaring “hardcore” action outstays its welcome with little to none replay value. To me, the movie was okay. It had its heightened moments, but feels more like a bad arcade video game (complete with a nonsensical thin-plot and a kooky over-the-top villain) come to life. Thusly, the ultimate decision to see this movie is a “Iffy choice” at best, with a final verdict that’s spilt down the middle from its viewers. Some will embrace its fundamental ideals, while others will downcast the feature because of its bizarre premise. Whether you join in the madness or not, Hardcore Henry is a peculiar experimental cinematic endeavor, slightly opening the door for future projects of a similar nature.

Hardcore Henry  is rated R for non-stop bloody brutal violence and mayhem, language throughout, sexual content / nudity and drug use