KRAMPUS IS COMING TO TOWN

It goes without saying that Santa Claus (or the spirt of Saint Nicholas) as long been associated with Christmas seaon. Many who celebrate the yuletide celebration were raised under the belief that Santa Claus would coming on Chirstmas Eve night and reward well-behaved children by leaving gifts and presents in their stockings and underneath the Chirstmas tree. Yet, despite the widespread joy of good old Saint Nick, Austrian alpine folkore speaks of Krampus, a dark entity that’s appears during the Christmas season and punish those children who misbehave. Krampus’s has appeared in many variations, but his depictions (for the most part) remains the same. A hairy anthropomorphic beast that has horns of a goat, cloven hooves, and usually carries chains (representing his bindings with the devil). Universal Pictures and director Michael Dougherty take the legend of the horned beast and present him in a theatrical feature film titled Krampus. Does this movie bring terror to the Christmas season or is it a bland horror flick with a folly folklore premise?

It’s Christmas time in the suburbs and young Max (Emjay Anthony) wishes to stick to old holiday tradtions with his family. However, his dad Tom (Adam Scott) is overworked, his mom Sarah (Toni Collette) is rententive perfectionist, and his sister Beth (Stefania LaVie Owen) has moved into the rebellious teenage years, leaving Max to ponder the idea of abandoning his love of the holiday spirit. Stomping into their house are Max’s relatives, including his Aunt Linda (Allison Tolman), Uncle Howard (David Koechner), and their awful kids, who crushes Max’s Christmas joy as he tears up his letter to Santa Claus, which summons evil to the unsuspected town. As the winter temperature drops and a unexpected and perpetual blizzard blows in, Max and his entire family (both immediate and extended family) are trapped inside their house when Krampus, the shadowy demon of Saint Nicholas, arrives, unleashing his twisted horrors upon the town and to Max’s family.

Much like I said in my review for Crimson Peak, I am not a huge fan of horror movies. Never have and never will. Plain and simple. I’ve seeing some out there (ranging from several iconic ones and some obscure ones, some that are supernatural and some that are gory slashers) However, I never have (nor will I) discredit those who enjoy and “good” scare in watching a horror movie. Its just not my cup of tea of a movie genre to greatly indulge in. Thus, when I first saw the trailer for Krampus (it was actually when I saw Crimson Peak in theaters) and thought I would never see this movie. However, trying to continue to expand my horizons as a movie reviewer, I decided to take a chance and purchase a ticket to see Krampus in theaters and review as well. After viewing the movie, I found Krampus to be a dark comedy horror rather than a truly scary horror thriller. Its heart is in the right place, but just isn’t as inventive as it wants to be.

Michael Dougherty, director of Halloween horror flick Trick ‘r Treat, returns to the spirit of the holiday, switching from Halloween to Christmas to tell his spooky horror story. Although, Trick ‘r Treat (which I did see) was a more of a horror / thriller, Krampus is more of twisted horror comedy (similar to how the movie Gremlins was presented). The movie, which was co-written by Dougherty himself as well as Zach Shields and Todd Casey, takes an examination at the mindless commercialism and humdrum artifice of the Christmas season. The opening title sequence for Krampus best showcases this with the tedious misery of holiday shopping (presented in slow-motion with Andy Williams’ song “It’s the Most Wonderful Time of the Year” playing in the background) as ruthless and pushy holiday customers fight and grab anything within arm’s length. Speaking from retail experience, it seems that most people (in general) have loss the meaning of Christmas and Dougherty shows in this great opening sequences. This then follows into the movie’s main character Max as his family seems to have lost the spirit of Christmas as well.  In truth, stripping away all the horrors and dark humor of the movie, Krampus focuses on keeping the holiday spirit alive from within as well appreciating family and love ones in times of holiday gatherings or (in more general terms) to respect each other.

For the most part, Krampus tries to emulate the cult classic horror movie Gremlins with its blend of comedy and horror. However, there are various points in the movie that don’t work with those two genres of film. Its comedy is good when it comes from movie’s actors, who some are pretty good at, but, when it clashes with some horror elements, the result is not a savory one. As a whole, Krampus doesn’t take itself too seriously (which helps the comedy aspect thrive), but the movie, at the same time, still wants to produce some holiday horrors for it viewers to get spooked by. I understand what Dougherty wants the movie to be, but falls somewhere in the middle and just out of reach from its potential goal. 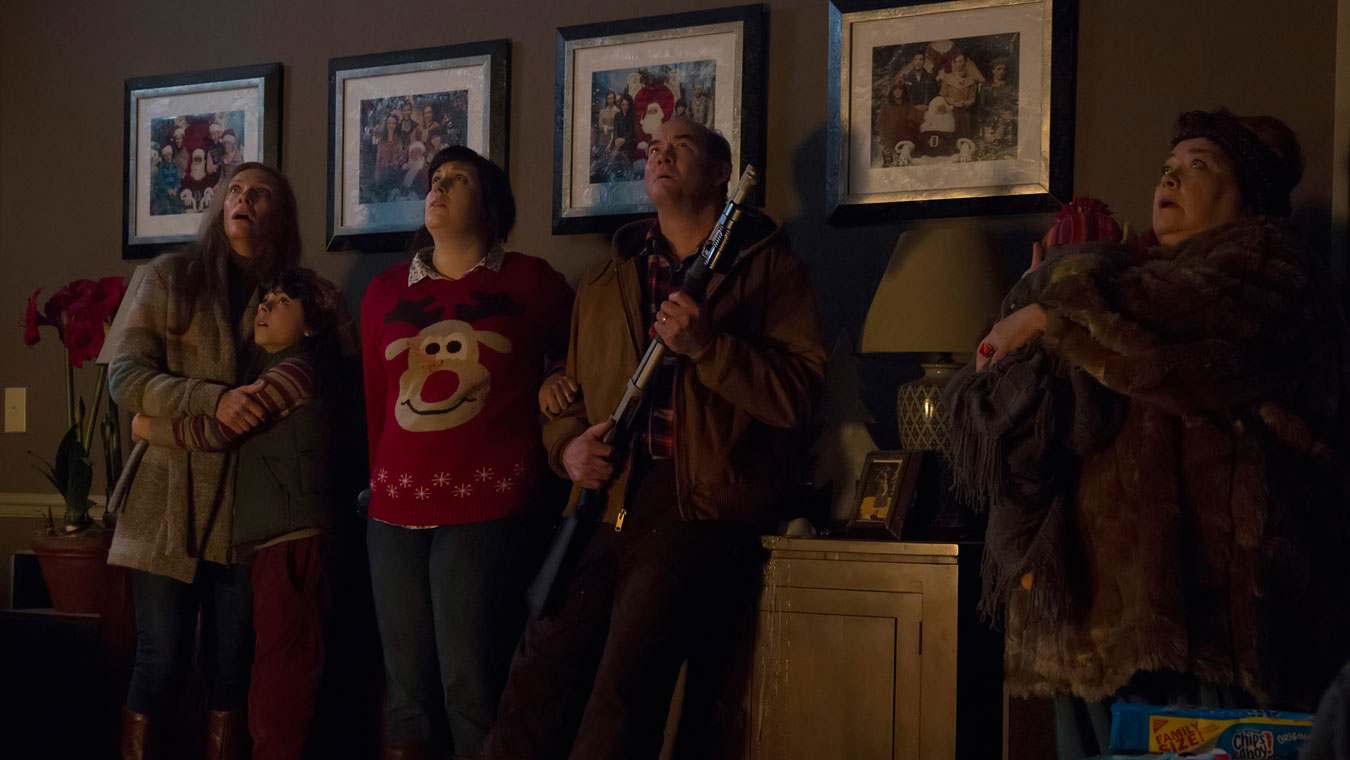 This can be seeing with Krampus’s variety of minions, who put a dark and quirky spin on holiday creatures (i.e. gingerbread men, a jack-in-a-box, elves, etc.). This is where its horror comedy comes into play as their mischievous angst produce laughable chuckle-filled moments rather than sinister terrorizing ones. Although, I do have to admit that Krampus’s minions are uniquely design with practical effects and a couple CG rendering. On the other hand, when Krampus himself appears on-screen, the comedy mischief disappears as the movie makes a dark turn towards more ghoulish horror. Again, the creature design work is great (especially how they make Krampus looks. Something truly out of holiday nightmares), but it just seems to conflict more with comedy rather than harmonizing with it. Additionally, I do have to praise Dougherty and his team for creating an origin story to Krampus, a scene that’s presented in a stop-motion flashback (similar to a Rankin / Bass holiday classic).

While Krampus himself is terrifying and his minions are mischievous with dark quirks, the human cast in the movie is less entertaining, with a couple of uneven character developments. Although, some character actors like Adam Scott, Toni Collette, David Koechner, Allison Tolman help elevate their characters in their own theatrical talents. The same goes for Conchata Ferrell as the outspoken Aunt Dorothy and Krista Stadler as the wise Grandma Omi. Even relative newcomer Emjay Anthony brings a sense of “child innocence” to the character of Max. The other cast members in Krampus, mostly the younger cast in supporting roles, like Stefanie LaVie Owen and Maverick Flack, are never fleshed out enough to break the parameters of their two-dimensional personas. Thus, the characters are underdeveloped and pretty forgetful.

As a final note (two things). First, the horror elements (ranging from quirky comedy to slightly nightmare-ish) are appropriate for a PG-13 movie as a lot of the malicious events / attacks are more often than not implied (take place “off-camera” or obstructed from viewing). That’s not to say that the movie still delivers to holiday terrors to its viewers. Just not as gory and frightful as one might think. Lastly, there moments throughout the film that drag and seem to act like “filler” or “transitions” between bigger scenes and moments. Even the first act in the movie feels completely different (a dysfunctional family drama / comedy premise) to what it becomes during the second and third act (a horror-ish home invasion with terrifying holiday creatures).

The spirit of holiday cheer and the blending of horror and comedy together make up the movie Krampus. Dougherty’s latest feature is indeed unique in its gleeful horror mischief, creative creature designs, several memebers of its cast, and its holiday satirical take on the formidable horned being from alpine folklore. However, the movie doesn’t resonate as strongly as it wants to be, with its two genres conflicting more often than meshing as well as several uneven character developments. Personally, it was an okay movie that had interesting premise, but, to me, its payoff as a movie is only moderately satisfying. However, those looking for a kitsch and holiday horror flim will mostly find Krampus to their liking. Just remember to believe in the holiday spirit…. or Krampus and his minions will pay you an unexpected and terrorizing visit this Christmas.

Krampus is rated PG-13 for sequences of horror violence/terror, language and some drug material