THERE ARE MUCH WORSE GAMES TO PLAY

Back in 2012, moviegoers everywhere were introduced to the motion picture phenomenon The Hunger Games, a film adaptation that was based off of Suzanne Collins best-selling teen series. While the film, which followed the female protagonist Katniss Everdeen, had its critics, ultimately won over its millions of fans, paving the way for other dystopian teen book series to be adapted (Divergent, Maze Runner, The 5th Wave, etc.). With the first installment movie a success, the series continued forward with its lucrative sequential sequels with 2013’s The Hunger Games: Catching Fire and 2014’s The Hunger Games: Mockingjay Part 1. Now, with the year of 2015 slowly drawing to a close, the time has come for Katniss Everdeen (the girl on fire) to bow out of her cinematic franchise with the highly anticipated finale The Hunger Games: Mockingjay Part 2. Is this last film a fitting conclusion to the series or is a bloated feature that has troubles ending its tale properly?

Recovering from her injuries that were inflicted by her now brainwashed companion, Peeta (Josh Hutcherson), Katniss Everdeen (Jennifer Lawrence) is completely determined to charge forward into battle and head towards the Capitol to assassinate the villainous dictator President Snow (Donald Sutherland). With the leadership of President Alma Coin (Julianne Moore) and Plutarch Heavensbee (Phillip Seymour Hoffman) eager to ignite the final “push” in the rebellion against the Capitol with their Mockingjay, Katniss is ready to take control of her life. Joined by longtime friend Gale (Liam Hemsworth), Hunger Games comrade Finnick (Sam Claflin), and Peeta, who’s trying overcome his recent traumatic urges, Katniss must face the trials of infiltrating the Capitol, attempting to evade the numerous and deadly traps that await them, while Snow watches the perils unfold with delight. The final battle for control of Panem has arrived and only one side can be the victor. 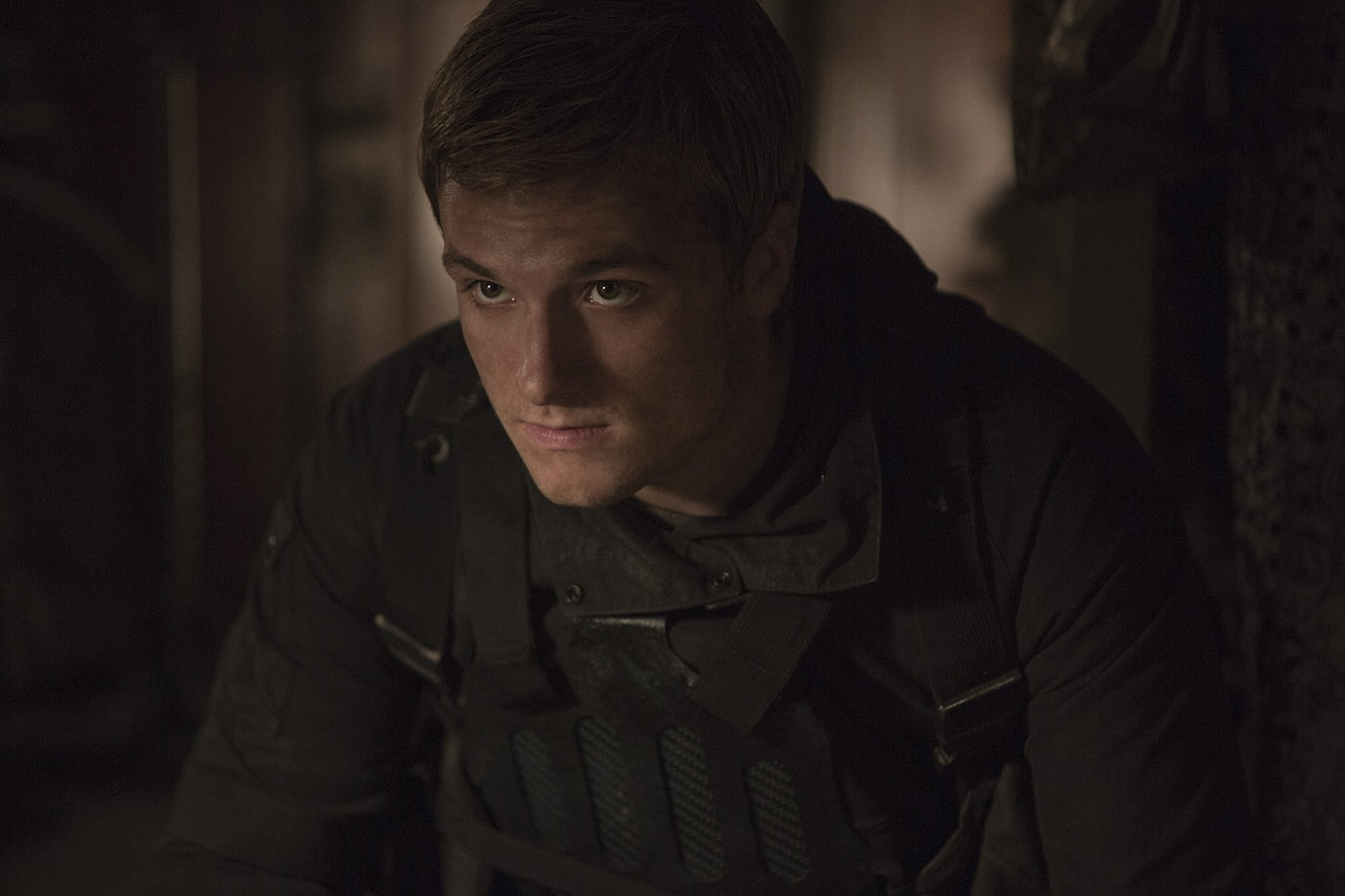 I have to say that I liked the first two Hunger Games movies with Catching Fire been my favorite of the two. However, Mockingjay Part 1 (the third installment in the film franchise) was what I called a “Lackluster Part 1 Endeavor”. The movie was slow, uneventful, and basically was a just set-up film for its Part 2 counterpart as it tried (and failed) to build up momentum and excitement as in its previous installments. Thus, Mockingjay Part 1 is probably my least favorite in The Hunger Games movies. As if it was a forgone conclusion, Mockingjay Part 2 proves to be better than its predecessor film and delivers at not only being a good movie, but probably the most dramatic finale movie in this cinematic saga.

Director Francis Lawrence once again returns to helm the ending chapter of The Hunger Games saga. Lawrence, who directed both Catching Fire and Mockingjay Part 1, seems to grow with a better understanding as a director and it sort of feels that Mockingjay Part 2 is his culmination piece of his three Hunger Games films. He’s already familiar with story, characters, and the world of Panem, thus Lawrence knows what he wants (and what he needs) to visually expressed in the movie. War, rebellion, oppression, and sacrifice have always been the common threads found in The Hunger Games franchise and Lawrence brings them all to a head in this final chapter. In short, it may not be the best entry in the series (see my negative remarks below), but Mockingjay Part 2 is definitely a crowning achievement in Lawrence’s talent as a director. As a side-note, the visual effects for the movie are the best in the series, which have come along way since the first film, and the musical score is still theatrically impactful, thanks to James Newton Howard, who composed the score for all four Hunger Games movies.

Much like how Harry Potter and the Deathly Hallows Part 1 and Part 2 were structural setup, Mockingjay, as a whole, follows that similar path. While Part 1 was the build-up precursor / setup to the finale, Part 2 is the big final battle confrontation and overall resolution to the story. Cinematographer Jo Willems knows how to capture dramatic images in the movie, showcasing aerial sweeps and theatrical elements to capture one’s attention as the setting of the once-proud Capitol is transformed into a urban maze-like Hunger Games arena. Similarly, writers Danny Strong and Peter Craig create a dystopian wartime drama for Mockingjay Part 2, hitting the big highlights from author Suzanne Collin’s source material (including the novel’s epilogue), while also creating heavy dialogue sequences that are either for character development and / or for narration purposes.

Additionally, much like how Deathly Hallows Part 2 was, Mockingjay Part 2 is the darkest entry in The Hunger Games saga. Similar to Harry’s battle at Hogwarts, Katniss’s trials in the Capitol, while being the highlight of the feature, are intense and horrific with scenes that are depicted with deadly ferocity and “shock and awe” sensation. With this being last chapter to tell, the stakes are high and the death toll is even higher. There are a lot deaths in the movie (to main / minor characters and to innocent bystanders), resulting in a notion that no one is safe with some chilling scenes that might be a little “gruesome” for some younger viewers to watch.

The movie does not escape its own inherit flaws and problems in its own theatrical undertaking. While the film moves at a somewhat brisk pace (slowing down here and there), it doesn’t slow down enough to focus on some of the story’s minor characters. Characters like Effie, Haymitch, Johanna, Prim, and Finnick have only a handful of scenes this go-round and are mostly pushed to wayside, while Stanley Tucci’s Caesar Flickerman and new character Commander Lyme (played by Game of Thrones star Gwendoline Christie) only have one scene in the movie (shame). Coinciding with that, while the film primary focuses on Katniss and her journey to the heart of the Capitol (to kill Snow), certain moments (some very emotional ones mind you) fall short and don’t resonate as much as was intended, missing an opportunity (at various points) to feel the effect and overall gravitas of the situations. There’s also events / moments I felt that are brush passed quickly in the movie and / or never fully explained (i.e. the rebels victory in District 2, the monsters in the sewers, the character of Tigress, etc.), Lastly, the ending of the movie feels a little too long. While I know its long for a reason (trying to tie up loose ends and give the story a fitting resolution), I just felt like the Lawrence and his writer didn’t know how (or didn’t want) to end the feature.

As for the cast of the movie, its solid performances all around (even the more smaller and minor roles are superbly done). Of course, leading the charge is actress Jennifer Lawrence as Katniss Everdeen, who is our emotional link in the movie and still continues to shine brightly as the film’s central protagonist. Along with Lawrence (the actress, not the director), Liam Hemsworth’s Gale and Josh Hutcherson’s Peeta return to their posts as Katniss’s closets companion / lovers as their love triangle, which has mostly lingered in the background in the previous movies, is brought to the forefront. I kind feel that it’s a bit clunky, but I ultimately believe it pays off in the end.

Additionally, while not as big as roles in previous installments, the minor characters like Elizabeth Banks’s Effie, Woody Harrelson’s Haymitch, Donald Sutherland’s Snow, Sam Claflin’s Finnick, Jeffery Wright’s Beetee, Willow Jena Malone Shields’s Primrose, Mahershala Ali’s Boggs, Jena Malone’s Johanna, and Julianne Moore’s Coin deliver all-round great performances. As side-note (and interestingly enough), background characters like Wes Chatham’s Castor, Elden Hensen’s Pollux, and Natalie Dormer’s Cressida have a little more screen time in this last chapter. As a last notable mention, Mockingjay Part 2 is the last movie that the late Phillip Seymour Hoffman is in following his death in 2014. There’s at least one or two scenes that you can tell his character of Plutarch Heavensbee was supposed to be present, but Lawrence and his team do a good job covering up his absence and still make his presence known in the movie.

The Hunger Games: Mockingjay Part 2 sends off the series in a powerful and dramatic fashion. While it’s a thrilling conclusion, the movie does falter (as a standalone movie and as a second half of its 2-part feature), losing a spotlight focus on its cast of characters, its narrative, and theatrical execution. However, the movie succeeds thanks to its incredible cast, improved visuals, and thrilling resolution to this iconic dystopian tale. To me, the movie, while not as great as the first two chapters, was pretty good and I’m quite satisfied with this cinematic finale to an overall successful (and entertaining) franchise. It’s definitely a surefire “must-see” feature for fans to see and a good reason for newcomers to reconnect with the series, as a complete story. While many viewers will debate and reflect upon the four installments of The Hunger Games saga (whether good or bad) for years to come, just remember…there are other movie franchises out there to be heavily scrutinize and “there are much worse games to play”.