A GOOD, BUT FAMILIAR START

Vampires, werewolves, and demon hunters, are now on the outskirts of what’s consider “In” right now with most teens. Paranormal romances of these dark, nocturnal creatures are beginning to fade and are being replaced with tales of dystopian realties. Stories of bleak futuristic settings, indoctrinated caste systems, oppressive governments, and rebellious uprising are the new rage in Teen YA books, which appeal to both adolescent genders. So, considering the dominating success of The Hunger Games movie franchise, it comes as no surprise that Hollywood has begun to buy up the rights to several of these popular book series to be viewed as feature films. Summit Entertainment plunges head first into this teen dystopian mindset with the film adaptation of Divergent, the first installment of a trilogy book series by Veronica Roth. Is Divergent the second coming for these types of grim futuristic movies or is it another novel adaptation that doesn’t live up to its namesake?

Set some one hundred into the future, the city of what used to be Chicago is divided up between five distinct factions: Abnegation (Selfless), Amity (Peaceful), Candor (Honest), Dauntless (Brave), and finally Erudite (Intelligent). These five factions are populated with individuals who are matched with their personas to the proper faction, which is determined by administered aptitude test at the age of sixteen. Borne into the Abnegation faction, Beatrice Prior (Shailene Woodley) is given the test to determine her future faction, but the test’s result come up as inconclusive. She is what society is called Divergent, a person who can fit into one or more faction. (Beatrice has three: Abnegation, Dauntless, and Erudite). It’s rare for this to happen and also very dangerous as the powers that be consider Divergents as a threat to their society. On the day of choosing a faction, Beatrice, keeping her newfound revelation a secret, elects to go into the Dauntless faction. As her rigorous initiate training to become part of the faction intensifies, Beatrice (Changing her name to Tris) is aided by a young Dauntless instructor named Four (Theo James), confronted with hardened ire from Eric (Jai Courtney), one of Dauntless’s upper echelon, and a keen interest from Erudite’s leader Jeanine Matthews (Kate Winslet). As the story unfolds, Tris begins to understand her abilities as a Divergent as she soon uncovers the ultimate plan that awaits her and the people of Dauntless; forcing the young adult into an inevitable and inescapable revolution.

With the exception of the Twilight and Hunger Games franchises, past experiences of handling adapted Teen YA books into movies like The Host, Vampire Academy, Beautiful Creatures, and City of Bones have, for lack of a better term, bombed at the box office. Divergent fares better than those adaptations and perhaps it’s because of its story, which is much more engaging than a forbidden romance with a vampire or werewolf. The most obvious comparison to Divergent is The Hunger Games. Both books and films describe a dystopian world, a tyrannical government, a rebellion to free the people from oppression, and a strong female lead character. So, basically, if you liked The Hunger Games movies you’ll like Divergent. At the same time, it’s hard not to notice the aura of familiarity that surrounds the film. The dystopian setting is from The Hunger Games, the choosing of the factions is like the magical Sorting Hat from Harry Potter, Beatrice’s initiate training into Dauntless (physical and mental) is similar to Ender’s Game, and even the relationship between Beatrice and Four feels reminiscent to Twilight. Some can be overlooked as crucial elements to Divergent’s makeup, but you can’t shake off that whole “Been there, done that” feel while watching the movie, which might not bode well for some. Also, given my lengthy description above for summarizing this story, it’s clear from get go that Divergent has a lot of world building to catch viewers up on to fully understand the rules and regulations of this dystopian Chicago order.

Director Neil Burger, notable for directing such films as Limitless and The Illusionist, achieves this to a certain degree, but losses sight of it at times. While fans of the book (Myself included) know what to expect when walking into this movie with a understand of the boundaries of each faction and a greater sense of what’s going on, those non-fans (the average moviegoer) might be a little perplexed by the movie; bombarded with obscure ideals, sparse plot holes, unexplained motives, quick expositions that don’t quite solidify into a fully realized story to Divergent’s narrative. On par with this is the fact of the film’s running time is long, clocking around 140 minutes. This causes the film to have pacing problems here and there and could’ve been avoided by easily trimming down certain scenes that were a held a little too long like a few of the training sequences, which come can be redundant at times. 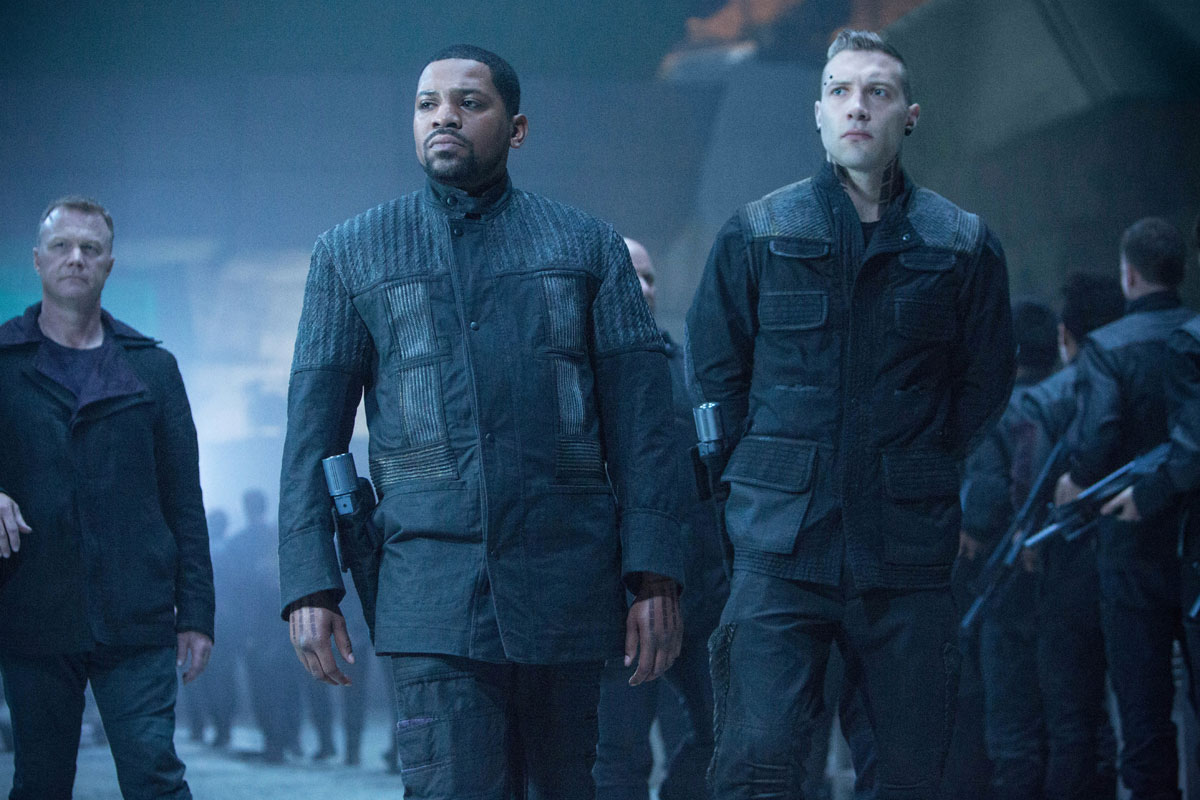 The score for the film is pretty good and met my expectations on that front with several techno-ish melodies and a lot of drums and percussions pieces. Though, the incorporation of several indie pop songs from today into the film seems a little awkward and out of place It’s inclusion may have worked for the Twilight movies and movie similar to it, but not in a film that is set one hundred years into the future. Set designs for interior shots are big with muted colors that don’t look that impressive, which is fine and nothing wrong; given the fact the film didn’t have a bloated budget of a summer blockbuster to begin with. The outside exterior shots for the film are the more impressive ones to behold as the city of Chicago (where they filmed on location) is portrayed in ruined and decayed with a new society living on top of it.

As for the cast of Divergent, it’s a solid cast that I consider to be the film’s saving grace. Shailene Woodley’s performance of Beatrice Prior, which could’ve make or break this movie, rests squarely on her shoulders with great ease. She has that kind of “Girl next door” look about her, which I like, and is confident in her role as Beatrice; conveying  a strong performance that makes you want to root for her as the movie progresses. Theo James’s Four is also another great strength to the movie. To his credit, he carries a swagger around him, which makes him likeable in his acting and in his character, and he is also definitely much manlier than other leading male actors in YA adapted movies. It also helps that both James and Woodley share a strong chemistry with each other, which is conveyed on-screen, and makes for a better relationship. And let me be honest here; Woodley and James combined outshine, outclass, and outmatch Twilight’s Bella and Edward, both in acting and in character. That much is beyond dispute (just had to put my two cents for that).

In the villain category, Jai Courtney does great job in playing Eric and his aggression towards Beatrice and Four as does Kate Winslet’s character Jeannine Matthews, who might come off as a little clichéd, but it’s what the story demands and perhaps Winslet will uncover more of her character in future installments. Zoe Kravitz, Miles Teller, Christian Madden, and Ben Lloyd-Hughes are thrown into the mix alongside Beatrice as new Dauntless initiates and all four give okay performances. Rounding out this cast are Ashley Judd and Tony Goldwyn as Beatrice’s mother and father respectfully, Ansel Elgort as Beatrice’s brother Caleb, Maggie Q as Dauntless member Tori, and Ray Stevenson as Abnegation’s leader Marcus Eaton. These actors, though given minor characters to serve in Divergent’s adaptation, deliver great performances that are worth noting; no matter how small their role is.

The jury (the public) is still out on the film adaptation of Divergent; a division between fans of the book, who will mostly like it, and non-fans, who have lingering doubts for this movie and its inevitable franchise longevity. Personally, I enjoyed the movie. Yes, the film does have its fair share of problems such as its familiarity with other narrative threads, uneasy pacing, and an overload of world building. However, Divergent is handled with a little more care than most adapted teen books with a strong cast and a better story to tell. It may lie in the shadow of The Hunger Games films as a second place runner up, but it is a good runner up that is worth checking out. And, much like how things were tweaked for Catching Fire, perhaps the same thing can happen for Divergent’s sequel (Insurgent), which can captivate viewers and forgive the missteps taken in its first theatrical installment.