Guardians of the Galaxy Review

The MCU (Marvel’s Cinematic Universe) has grown into a powerhouse juggernaut in Hollywood. For the past several years, Marvel Studios has taken some of the most iconic superheroes in their arsenal and brought them to the big screen, creating a cinematic world of fantastical heroes and villainous villains. Well-known characters such as Iron Man, Thor, Captain America, and others, have graced the silver screen (In multiple movies) with joyous fanfare of saving the world and thwarting evil. Now, hot off the heels of the overwhelm critical / box office success of Captain America: The Winter Soldier, Marvel Studios debuts its 10th installment in the MCU with the sci-fi space opera titled Guardians of the Galaxy. With the movie branching out into unfamiliar territory (Outer Space) and with a roster of lesser-known Marvel characters, does the film reach interstellar glory or is it simply a visual pile of space junk?

Abducted as a child from Earth, Peter Quill (Chris Pratt) aka Star-Lord has become an intergalactic tomb raider and scavenger, joining the ranks of the Ravagers, led by Yondu (Michael Rooker). One day, Quill comes across a mysterious orb, a catalyst for greater events to come and an item that everyone wants. After a failed attempt to hawk the orb on the planet Xandar, Quill lands himself in prison and forms a strange friendship with other convicts in a prison escape, teaming up with Gamora (Zoe Saldana), a deadly assassin and adopted daughter of the evil Thanos (Josh Brolin), Drax (Dave Bautista), a fierce brute out for revenge, Groot (Vin Diesel), a sentient hybrid tree humanoid, and Rocket (Bradley Cooper), a genetically engineered raccoon. With the galaxy threatened by Ronan (Lee Pace), a nefarious rogue in league with Thanos who wants possession of the orb, and his lackey Nebula (Karen Gillian), Quill and his band of misfits and outcasts must come together, embracing their quirks and ideals as a team as they uncover the mystery behind the orb and save the galaxy from annihilation. 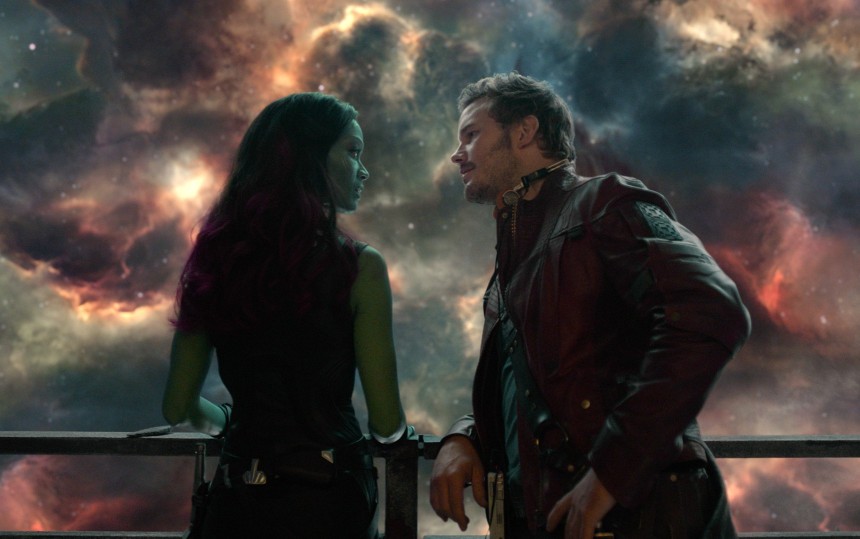 Given the continuity of the past movies of the MCU, it seems Marvel was going through the motion of playing it safe (Sticking to what they knew and what audiences members liked). When Guardians of the Galaxy was announced to be adapted as movie, it was met with excitement from fans of the comics, but also with concerns and skepticism from critics. Given it’s a relatively new comic amongst older ones that date back to the 50’s and 60’s and the ideal of expanding the MCU to the cosmic realm, many believed that the movie, failing to connect with viewers to gain critical mass, was a huge risk for Marvel Studios that could of potential blow up in studio’s face like an ACME dynamite stick. If it was risk, it’s a paid off in a very big way.

Director James Gunn, who has directed lesser known films like Slither and Super, helms Guardians of the Galaxy, bringing the usual blockbuster bravado of a standard Marvel movie, while, at the same time, infusing his own style of oddball oddity and quirky cinematic flair.  The result is brilliant. The film captures the scope of a science fiction space opera, the tangible arc of heroism amongst misfits, the comedic jokes of wisecracking humor, and a nostalgia of pop culture references (Troll dolls, Walkman, the movie Footloose, etc.) and music from the 70’s. Speaking of the music, I was a little concerned about the usage of these throwbacks songs in the film. It seems weird and out of the norm, seeing all the promos for the movie and hearing songs like Blue Swede’s “Hooked on a Feeling” or The Runaway’s “Cherry Bomb”, but it actually works well in the movie; interjecting at various parts throughout the movie as it is a intricate piece in the character persona of Peter Quill. Don’t be too surprised if you find yourself humming some of the songs after seeing Guardians or running to buy the soundtrack (Awesome Mix Vol.1). In short, you simply embrace James Gunn’s eccentricities, eventually becoming a natural part of watching and enjoying Guardians.

Of course, the film’s plot revolves around the outer space sci-fi themes with intergalactic jaunts to otherworldly planets and vistas, a world threatening annihilation, aerial spaceship dogfights, and various alien creatures. It’s the stuff of science fiction and it works, but it’s merely in the makeup of Guardian’s setting as the true focal point is how these unlikely groups of heroes meet, fight, bicker, and ultimately come together. Each of the five characters gets their own moment to shine on-screen, but it’s impressive and neat to see some of them form bonds with each other. (Quill and Gamora, Rocket and Groot, Drax and Rocket) So, when these outcasts embrace their identity as a collective team, it makes sense and feels genuinely right. The movie finds a great balance in its tone. It takes itself serious when it needs to be and becomes lighthearted with humor at other times, (More so than any other Marvel movies of late). But the movie isn’t just about cosmic action and crass one-liners, emphasizing on emotional parts (Especially the opening scene) as well a couple tender moments towards the finale.

From a technical standpoint, Guardians of the Galaxy’s achievements in make-up and visual effects are commendable. Aliens of all different kinds are promptly displayed with rich details and textures, giving off a vibrant wonderland of outer space denizens. The visuals behind some of the more extraordinary creatures in the film like Rocket and Groot are fantastic to watch with their fluid movements and seamless facial expressions. Other visual effects designs are also to be well-noted from the futuristic cityscape of Xandar to grimy corridors’ of the Kyln Prison as well as the overall look of the ship designs for Star-Lord’s Milano and Ronan’s Dark Aster.

Chris Pratt is the living embodiment of Peter Quill. Who would’ve thought that the chubby goofy guy from the television show Parks & Recreations would become the leading man in a Marvel movie. Pratt brings an equal measure of heroics and cockiness to the character of Star-Lord, feeling comfortable in his role to dish out the classic hero lines as well as snappy humorous banter. Opposite Pratt, respectably, is Zoey Saldana’s Gamora with a hardened guile and determination that knocks Quill’s bravado down a peg or two. She also pretty much kick ass in the movie. Dave Bautista’s Drax is somewhat a surprise hit in Guardians. Much like Dwayne “The Rock” Johnson, Bautista, beyond his muscular physique, has great timing in his delivering of lines, offering some of the funniest quotes in the movie. Voicing the smart-aleck Rocket, Bradley Cooper delivers a funny and memorable role filled with a tough little guy attitude and witty sarcasm. As for Groot, it may not be the most demanding role for Vin Diesel (Repeating the phrase “I am Groot” in various tones), but his character brings charm and warmth to the other members. Plus, Diesel’s scratchy voice fits perfectly for Groot.

As for secondary characters, the best goes to Michael Rooker’s Yondu, who’s funny and bring his own charisma to the character. Lee Pace’s Ronan is sinisterly evil and Karen Gillian’s Nebula is just as ruthless as Gamora. Both villains look and sound impressive, but aren’t breaking new ground in the evil category, which is fine as again the focus of the movie is the relationship of the Guardians and not so much between hero and villain. Other notable actors include Glen Close as Nova Corp leader Nova Prime, John C. Reilly as Nova Corpsman Rhomann Dey, Djimon Hounsou as Ronan’s lackey Korath, and Benicio Del Toro as The Collector. These actors, though with limited screen time, make the most of their roles by some great writing and /or their thespian caliber.

I only have a few minor nitpicks for this movie. First, the film could’ve been a little longer (Spending more time with each other team member would’ve been delightful) as the first act of the movie seems a little rushed and could’ve spent more time explaining things with a little more in-depth insight. Next, some die-hard fans of the Guardians of the Galaxy comics (Myself included) will be a little teed off with the movie not sticking with its cannon 100 %, but no adapted comic book movie ever is. Lastly, as always, there’s a secret ending at the end of the credits and, while funny to a certain degree, it’s nothing enticing as I was hoping for some kind of connecting foreshadowing piece to a future MCU installment. These, of course, are all minor quibbles to me and really didn’t deter my fascination and all out “Geeky-ness” towards this movie.

Was it a risk? Yes. Was it worth taking a risk? I definitely think so. Is it different? Of course. Would I see it again? Multiple times. Guardians of the Galaxy has a very distinct charm and a confident swagger about it. It’s a bold, fast-paced action summer blockbuster film that’s enormous fun (A lot of laughs) and highly entertaining, while, at the same time, dancing to the beat of its own drum. Personally, it was an incredible movie, meeting my extremely high expectations with joyful glee and pleasing my inner comic boy fandom. It was, to me, not only the best movie this summer, but also the best movie so far this year. With Guardians of the Galaxy 2 already confirmed by Marvel (a release date set for 2017), the long wait for the next chapter begins. It will be interesting to see where Marvel will take their cinematic universe in the upcoming phase III saga (The phase II saga ends next year with Ant-Man ). Here’s to hoping that we one day see a movie where Earth’s Mightiest Heroes (The Avengers) team up with the Guardians of the Galaxy. Now that’s a film I can’t wait to see.