THE RETURN OF THE “BEAR” NECESSITES

Written by Rudyard Kipling in 1894, The Jungle Book is a classic in the world of literature, collectively making up a selection of tale from Indian fables with the usage of anthropometric animals in manner of learning moral lessons. With its success over the years (rather centuries), Kipling’s The Jungle Book has been adapted many times, manly focusing the adventures of the young man-cub Mowgli. OF these adaptations, the most famous comes in the form of a cartoon with Disney’s 1976 animated feature film The Jungle Book (again focusing on the tale of Mowgli). Many other adaptations have been made (some good, some okay, even some that were just “blah”), but none better than Disney’s classic cartoon film. Now, continuing their trend of revitalizing their illustrious cartoon legacy into live action films, Disney and director Jon Favreau brings another adaption of Kipling’s tale to life with The Jungle Book. Is this newest iteration of Mowgli’s tale worth watching or does it get lost in its own jungle?

Discovered by the panther Bagheera (Ben Kingsley) as a baby, Mowgli (Neel Sethi) has been raised by a wolf packed led by pack leader Akela (Giancarlo Esposito) and mothered by Raksha (Lupita Nyong’o). Growing up into a young child, with the jungles of India as his playground, Mowgli’s presences brings concerns on the law of the land (the jungle), where the ferocious tiger Shere Khan (Idris Elba) emerges with plan to kill the adolescent man-cub, fully knowing the destructive capability that his maturation will bring. With Khan’s threat looming and fearing the boy’s safety, Bagheera escorts Mowgli through the jungle, leaving his wolf pack behind and to live in the village of man. However, the journey is far from easy, with Bagheera losing track of the boy, who encounters the powerful hypnotic seduction of the python snake Kaa (Scarlett Johansson), the bargaining threat from the gigantopithecus King Louie (Christopher Walken), and finding companionship with the debonair bear Baloo (Bill Murray).

Before I begin my opening paragraph remarks, I would like to take the time to tell you guys (my viewers) that the movie The Jungle Book was my first movie that I saw in theaters in an international territory (Hooray!). I saw it while I was on vacation in Costa Rica and the movie was in English with Spanish subtitles. The Jungle Book also signifies a milestone in my blogging, representing my 150th movie review (I have a couple that I haven’t posted from my old blog that I’ll post throughout the year).It may not seem like a big deal to some, but it was for me. Just wanted to share that with you all and to show my dedication to my movie blog and to my overall passion for movies.

And now to business. As I said in review for Zootopia, I am huge Disney fan; always was and always will be. So of course, I seeing and loved Disney’s 1967 animated feature film, but, like Oliver and Company, I didn’t see it until I was 11 or 12. Thus, it wasn’t as “impactful” on my childhood as was Lion King, Aladdin, and Beauty and the Beast, but I still love the movie nonetheless, with its colorful characters and playful songs. As a child, I always remember watching Disney’s sing-along videos, singing along to “Bare Necessities” and “I Wanna Be Like You”, even though I never saw the movie until several years later. Upon hearing the news that Disney’s was revamping Kipling’s famous story, I immediately knew that I was definitely going to go see the live action version of The Jungle Book, but. like many, I had my skepticism about this film project, fearing that the movie would somehow alter / taint the beloved cartoon that many have enjoyed watching over the years. I can go on record now and say that this not the case as the 2015 live-action presentation of The Jungle Book is fantastic movie that honors the animated feature, while uniquely discerns itself from it, with its own array of jungle adventures for both the old and new generation to explore.

Bring to life the adventures of Mowgli in this live-screen adaptation belongs to actor / director Jon Favreau. Favreau, famous for directing and / or starring in movies like Iron Man (directing 1 and 2), Chef Daredevil, and Couples Retreat, takes up the challenge of transforming Disney’s iconic animated movie and revamping it into something that modern audiences will enjoy and be engaged with. To his credit, he does, making The Jungle Book feel like its own entity. OF course, fans of Wolfgang Reitherman’s animated romp of Disney’s The Jungle Book will have plenty of reason to still enjoy that movie, but Favreau version utilizes the live-action aspect, encompassing and displaying all the action, wonder, terror, and overall struggle found in Mowgli’s journey that couldn’t be conveyed in the 1967 cartoon. Naturally, this 2016 version has retooled and refined some of the aspects found in the animated film, but, for the most part, still leaves the main narrative intact. In truth, Favreau’s version offers a more complete story, showcasing the “law of the jungle”, the true villainy of Shere Khan, the turmoil of Mowgli’s presences in the jungle and the deadly relationship that the animal kingdom as with man and their creation of the elusive “red flower” (fire). Effectively, it all works, spinning a yarn that’s slightly more compelling than all past Jungle Book retellings. 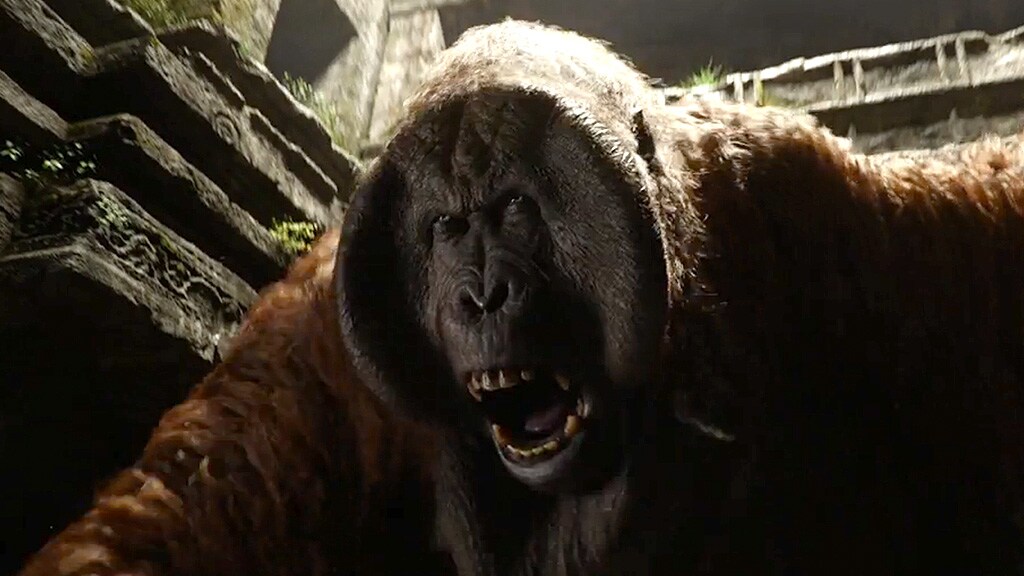 Thematically speaking, Favreau’s The Jungle Book is relatively more mature and probably the most complex iteration of Kipling’s story of Mowgli. This, of course, is in its altercation in its narrative, which goes deeper than the Disney cartoon ever did and fully exploring the true terror and beauty of this animal kingdom. It’s also more emotionally invested in its story, with plenty of scenes that invoke tenderness. On the other hand, the movie adds some dark elements into the mix, some that maybe a little frightening for younger viewers. Even though The Jungle Book is rated PG, it’s a hard PG. The good news is that Favreau doesn’t overkill with scary parts. There’s some lighthearted moments to be had, especially scenes involving the character of Baloo, but the movie’s overall tone is more serious. The film does stumble a little in this aspect, as it wants to service its younger fans (which it does), but also present a more mature oriented feature; having a bit of a hard time balancing scenes of comedic levity and scenes of heavy drama.

Additionally, the movie does have the common troupes and story elements found in a feature about self-discovery / the hero’s journey. The outcast in society, the shaky friendships, and the man vs. nature allegory are present can be a little cliché (if you think about it), but it’s easy to overlook as I really didn’t expect this move to be like something that offers anything “earthshaking” or completely reinvented from Kipling’s tales. There’s still plenty to love about this movie and the most impressive comes from the updated CG visual effects. It’s absolutely gorgeous and a very vibrant world, full of color creatures, animals and the topography of an Indian jungle. The scenery in the movie is breathtakingly beautiful with a great level of detail added to help transport you (the viewer) into this lively kingdom of animals, offering plenty of vistas and locales that are tantalizing to behold. Furthermore, the cinematic realism aids this live-action endeavor, bring to life an animal kingdom of creatures that walk, move, and behave with animalistic realism. I watch it in 3D and it actually does help immerse a viewer to Favreau’s jungle world. Thus, I would recommend this movie to be seeing in 3D or even IMAX 3D (if you have an IMAX movie theater nearby).

Being the only human of the main cast of characters, Neel Sethi does a great job as the young man-cub Mowgli. Sethi, a relatively unknown child actor, perfect embodies the role, having that spirited wonder of a child as well as its youthful awkwardness, expressing joy, sadness, and determination within his jungle environment. He definitely looks like how I pictured Mowgli would like in a live-action movie of The Jungle Book. His acting ability is nothing groundbreaking for a child star, but I really didn’t expect Sethi to showcase the acting talents in the classic thespian arts of acting. All in all, Neel Sethi brings enough youthful swagger to proceedings, making him a very effective Mowgli. Sharing scenes of light-heartedness and comedic relief is the character of the carefree bear Baloo, who is voiced by actor Bill Murray. Murray, who is usually called upon to play comedic or “quirky” roles play in similar fashion to Baloo, offering a very warm and friendly representation of a big furry bear who just wants to enjoy life (and his honey). Of course, keeping the original flair from Disney’s animated movie, Baloo and Mowgli sing the infamous “Bare Necessities”, which is a delight to hear, especially to hear Murray singing.

In all honestly, my absolute favorite character in Favreau’s The Jungle Book is the film’s main antagonist, the fierce tiger Shere Khan. In all the adaptions, Shere Khan was a formidable foe (whether drawn by hand for 2D animation or depicted as real life tiger), but none more ferocious that how he was portrayed in this version. With help of computer visuals in making their characters more believable looking, Khan’s on-screen is commanding and, with his impressive voice of actor Idris Elba, helps elevate this blood-thirsty character to being truly terrifying and a wonderful villain. Similarly, the character of King Louie has been “amped up” for this movie as portrayed as a gigantopithecus, an extinct species of a great ape. Like Shere Khan, Louie is an intimidating figure in the movie, making his appearance that more impressive to behold on-screen as actor Christopher Walken, brings his usually signature voice to the character (a sort of mafia crime boss) and brings to life the classic Disney song “ I Wanna Be Like You” with his own rendition of it.

Behind those characters are the characters of the panther Bagheera and the wolf Raksha. Bagheera is voiced actor Ben Kingsley, offering a calm and guiding voice to Mowgli on his journey, while actress Lupita Nyong’o brings a protective and motherly voice to the Raksha. In more minor supporting roles are Giancarlo Esposito as the proud leader of the wolf pack Akela and Scarlett Johansson as the venomous python snake Kaa. Both are in minor capacity in the movie, but their voice talents, along with their on-screen animal representation, helps keep the performances memorable in the movie. Lastly, the late Garry Shandling has a minor role as the porcupine named Ikki, who has a couple of chuckle moments when on-screen. 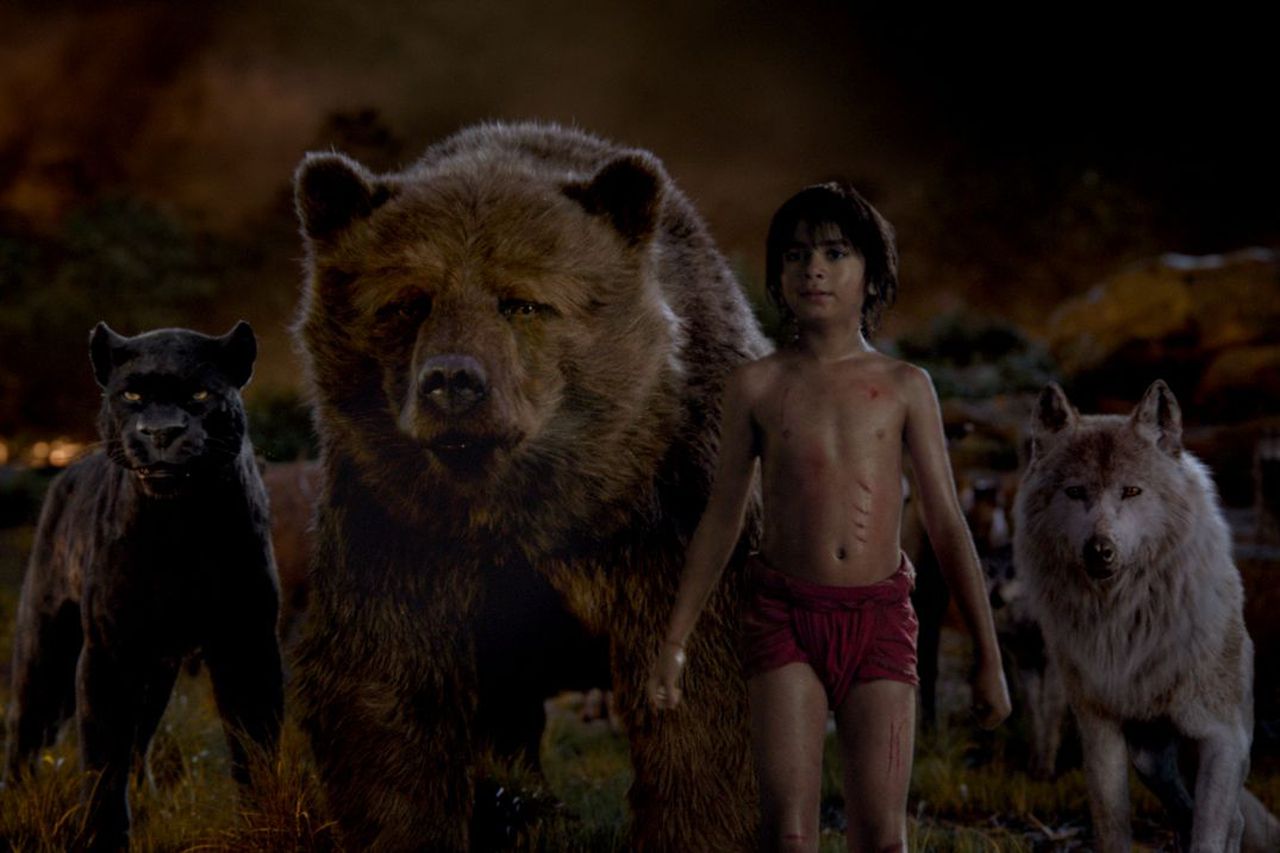 Mowgli, Bagheera, Baloo, and Shere Khan return to the big screen for the movie The Jungle Book. Jon Favreau’s latest film brings to life Kipling’s characters in an amazing live-action movie, chock full of thrilling action, impressive visuals, heightened drama, and solid voice talents / characters. It may stumble with a juggling of light and dark tonal elements here and there, but it was a compelling story of a classic being brought to life threw the achievement of modern moviemaking. To me, the movie matched my high expectation for this movie (I believe I made place The Jungle Book at # 11 on Jason’s Top 15 Most Anticipated Films of 2016). It was enormously entertaining and exciting to see Kipling’s character come alive on the big screen. Thus, I would personally highly recommended (though I would caution younger viewers from seeing this movie). As Disney continues to “pave the way” for reimagining its animated classics (the next one The Beauty and the Beast and is set for a 2017 release date), The Jungle Book stands a prime example of how update version can honor its past, while proudly standing on its own cinematic acclaim.