A POIGNANT (AND HUMDRUM)

At the heart of Christianity, among the countless tales of myths and faith, is the tale of Jesus Christ and the depiction of death and resurrection. Besides the story of his birth, this scene is arguably one of the most iconic stories in all of Christianity, preaching Jesus’s tale of his sacrifice and benevolence on “dying of our sins”. It’s a central fix point of the religion, transcending all other bilabial accounts and still speaks volumes, even into today’s world. Hollywood hasn’t shied away from dramatizing this depiction of Christ, with movies like The Passion of the Christ, Ben-Hur, Jesus of Nazareth, and The Greatest Story Ever Told as well as various other adaptation (cartoons, and kid friendly versions). Now, Sony / Columbia Pictues and director Kevin Reynolds bring forth a new film adaptation of Jesus Christ’s death / resurrection with the movie Risen. Does this new feature film breathe new life in this ancient biblical tale or is it too derived from other retellings to offer anything new? 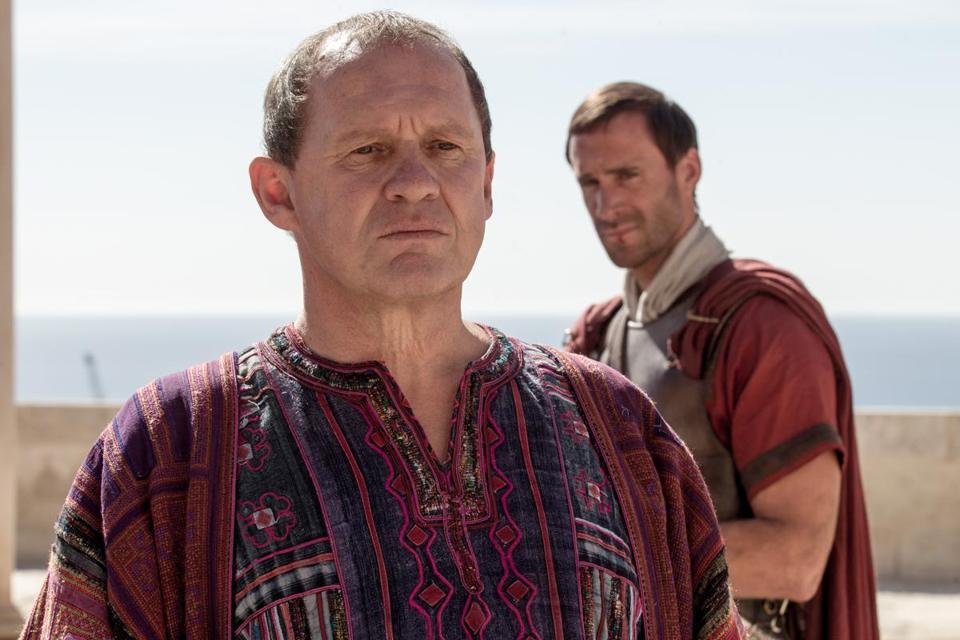 Roman Centurion Clavius (Joseph Fiennes) has seen his fair share of war and blood, weary with the turbulent state of Jerusalem and tired of doing the bidding of Roman Perfect Pontius Pilate (Peter Firth). With the completion of the latest crucifixions of radical Judaic worshippers, Clavius is taken aback by the stillness of one Yeshua (Cliff Curtis), who endures the horrific punishment under Roman law. Overseeing Yeshua’s burial to dismiss rumors of his resurrection from Jewish leaders, Clavius is stunned to receive word that a resurrection “miracle” did occur with Yeshua tomb opened and without a body. Under Pilate’s orders, Clavius begins his manhunt journey to retrieve Yeshua’s body, with subordinate Lucius (Tom Felton) to aide him on this quest. Clavius’s extensive investigation takes him to interview locals and leaders on the mystery of Yeshua and what happened inside his sealed tomb. However, Clavius’s journey is not one of logical reasoning, but of unwavering faith as the Roman is confronted with the power of enlightenment, traveling with Yeshua’s loyal Apostles, who seek to see the return of Yeshua.

Without delving too deep into religious beliefs in this blog post, I am a Christian, but not one of the crazy fanatically devout ones. Thus, naturally I was raised at an early age of the biblical imagery of Jesus’s death and resurrection and its overall importance. And that’s all personal religious babbling I’m going to talk about. Anyway, since I go to the movies a lot (and I do mean a lot), I always kept seeing the trailer for Risen. I honestly really didn’t think about seeing it, thinking that I might rent it when it comes out on home release later this year. However, after seeing the trailer it way, WAY too many, with the words “Experience the event that changed the world through the eyes of a non-believer“ almost ingrained in my head, I decided to purchase a ticket to go see it in theaters. Unfortunately, Risen, while offering an interesting concept, is a poignant but rather dull biblical manhunt, which acts like a grandiose History Channel TV movie.

Director Kevin Reynolds, who previously directed films like Robin Hood: Prince of Thieves, Waterworld, and Tristan and Isolde, takes up the mantle of bringing Risen to the big screen. Reynolds, who co-scripted Risen along with Paul Aiello, has a difficult task of trying to reinvent the “most famous biblical story”, which has been told and retold in many media facets throughout the years, and come up with something not necessarily “new” per say, but at least something refreshing. To its effect, Reynolds does, opening Risen with the iconic death scene of Christ and his ultimately resurrection, a scene where most stories / movies end with their narrative. Risen goes beyond that, telling its second and third act post-resurrection of Christ with interesting take of “Roman” police investigation into the disappearance of Yeshua’s body.  It’s not new, but it’s something different for that tale such as this.

As you can tell from the get-go, Risen has a limited production budget (so don’t expect the lavishing feature with a cast of hundreds and stunning visuals. However, I found that Risen’s look and feel is actually pretty good, with impressive sets and appropriate clothing attire. Even scenes that mostly would’ve called for “big budget sequences for visuals” are represented well-enough to believe in, even if the effects are not necessary shown. It still has the resonating feel to it and that’s all that matters.

Just because this looks like a swords and sandals movie, doesn’t mean that it is. Risen has one battle sequence towards the film’s opening first act, establishing the character of Clavius as a weary and battle-hardened Centurion. Its effective in that regard, but it’s nothing to get really excited about, for a small battle and perhaps a little too “orchestrated” to even care about. After that, there’s really nothing “grandiose” in terms of a battle scene.

Unfortunately, Risen lacks the power it needs. It’s definitely insightful, moving, and poignant (all of which examines the power of faith), but it just seems humdrum. I mean, the first act is actually my favorite part of the movie and, to me at least, is the most interesting to watch. That being said, half of the second act, as well as the third act, lacks excitement and has some pacing problems, which is kind of strange for a movie that only has a runtime of only 107 minutes long. There’s a lot of walking, sitting, vague dialogue scenes, and one or two miracles to behold. That’s pretty much it. Even the character of Clavius, who is the main character of Risen, is more push to side during the second half of the movie, acting more as a bystander with Yeshua’s devout Apostles. Then there’s film familiar religious tones, which can be a little wonky at various points. Lastly, the movie’s ending is sort of confusing and feels somewhat incomplete as if Risen was trimmed down during editing and its “true ending” lies somewhere on the cutting room floor.

Risen’s cast is a mixture of knowns and unknowns, resulting in a variety of characters that range from good to okay, almost even laughable. Joseph Fiennes, brother to actor Ralph Fiennes, does a surprisingly good job as the Roman Centurion Clavius. It’s not the most dynamic character to play, but Fiennes fares better than most of the cast, which is a good thing because he’s the central character of the film. Harry Potter alum Tom Felton does a serviceable role in the character of Lucius, acting as personal aide to Clavius in the narrative, but he’s more in the background and offers nothing more than to further plot points forward. Perhaps the best performance in Risen is actor Peter Firth, playing the role of Pontius Pilate. He definitely looks the part (he almost exactly how I pictured the iconic Pontius Pilate to look like) and Risen’s Pilate is more of a man who is sort “cleaning house” and trying to keep the peace in Judea as well as appeasing Rome’s interest.

Actor Cliff Curtis has the daunting job of portraying the famous Jesus Christ (called Yeshua in Risen) and does actually a good job in the role, playing the part with kindness and benevolence as he appears and reappears throughout the story. The rest of the cast is more in supporting roles, including María Botto as Mary Magdalene and Antonio Gil as Joseph of Arimathea, and is a mixture of okay performances to almost being silly and flat, especially a couple of Yeshua’s Apostles (who just sit around and laugh a lot).

Faith and belief go hand in hand in the new biblical movie Risen. Reynold’s latest religious movie offers an intriguing tale of the classic non-believer yarn with some investigation story post-Jesus resurrection. However, the film’s familiar tones are uninspiringly familiar, drags at certain points (especially the third act), and sort of feels lackluster in its entirety. Personally, it was slightly okay and could’ve been better, but also could’ve been a lot worse. In truth, Risen is preaching to the choir, depicting itself with good vs evils in its various characters as well as its enlightenment foreboding. It isn’t  deep or nerve-wracking work to watch, but Risen, at the very least has enough sincerity towards spiritual elements without overbearing them, making the film a slightly better approach than the common standard faith-based feature.