It’s clear that the big three teen dystopian series (The Hunger Games, Maze Runner, and Divergent) have proven to be the staples of recent teen / YA literature. Their popularity has catapulted the whole “dystopian” aspect into that section, pushing out the paranormal romance novels (vampires, werewolves, demon-hunters, etc.) and making room for numerous tales of tyrannical governments, rebellious uprisings and bleak futuristic societies. In addition, those same three series have proven strong enough to be adapted into feature films, with each one turning their own lucrative profit within their movie franchise. Back in 2013, author Rick Yancey’s The 5th Wave (the first of a planned trilogy) was released and has, since then, growing in popularity. Now, following in the footsteps of The Hunger Games, Maze Runner, and Divergent), Columbia Pictures (Sony Pictures) and GK Films are ready to present the theatrical adaption Yancey’s first novel in the movie The 5th Wave. Is this newest teen dystopian adventure worth seeing or does stand in the shadows of its predecessors?

Cassie Sullivan (Chloe Grace Moretz) was living the average life of teenager adolescent, concerning herself with friends, parties, and her quasi-crush on her fellow classmate Ben Parish (Nick Robinson). However, Cassie’s life drastically changes when alien invaders arrive over Earth (nicknamed “The Others”) and begin a systemically waves of coordinated attacks, wiping out a large percentage of the world’s population by loss of electricity, flooding, and airborne virus. Following the death of her parents, Cassie looks after her little brother, Sam (Zackary Arthur), as the siblings are soon separated during a covert excavation ordered by the Colonel Vosch (Live Schreiber). Cassie is left on her own to fight off “The Others”, soon finding a helping hand from Evan (Alex Roe), who knows the ways of survival during this post-alien invasion world, as the young teenager warms up to her new companion. Determined to be reunited with her brother, Cassie travels with Evan as they plan to rescue Sam, waiting for the opportune moment to strike. At the same time, Ben enrolls in Vosch’s new military army, consisting of young soldiers (including Cassie’s younger brother) to combat the impending the final “wave” from the alien attackers.

Working at a bookstore, I’ve read big three teen dystopian series that I’ve mentioned above (The Hunger Games novels being my favorite) and seeing (and mostly enjoyed) watching their theatrical jump from pages to screen these past years. Unfortunately, I haven’t read The 5th Wave series yet as I’ve been too busy reading other books. However, I’ve heard good things from it and plan to start reading the first book in the coming months. As for The 5th Wave movie itself, I was initial curious to see after seeing the trailer multiple times in theaters. However, while it has an interesting concept, the movie seems like more of a mediocre endeavor and lacking the dramatic punch that its cinematic predecessors claimed before.

As I said above, I haven’t read The 5Th Wave book yet, so I can’t discern on what was add, omitted, or changed from its printed format to its big screen debut. This review is more structured around what the movie presents.

Director J. Blakeson, who previously directed psychological thriller The Disappearance of Alice Creed, is the one who is tasked of bring Yancey’s first installment to the big screen. Interestingly, Blakeson is given an opportunity that unique and different from other recent theatrical dystopian adventures. While those stories (I’m talking about The Hunger Games, Divergent and, Maze Runner) show a viewer a post-apocalyptic world, the movie begins pre and mid-apocalyptic, showing Cassie as a normal high school teenager and the entire world acting as normal before the arrival of “The Others” and the events that follow. Additionally, while other protagonist leads like Katniss Everdeen and Beatrice Prior grew up in their own respective dystopian society, Cassie and her friends are forced into their “post-apocalyptic” world, pushing them out of their normal life “comfort zone” and throw into a bleak and harsh reality. Coinciding with that idea, Blakeson is also able to showcase the “destruction of the world” through the calculated attacks by “The Others” This actually did grab my attention (and was probably the most engaging scenes in the movie) as the movies shows cars ramming into each other, planes falling out of the sky, earthquakes, tsunamis, and more. Again, it’s an interesting way to grab a viewer’s attention in a movie as you visually see the decline of the human race and the begin of the new dystopian world order.

While its alien invasion premise is very interesting to the setup the story’s narration, The 5th Wave can’t hold off from being formulaic to the teen / YA angst and dramas that are commonly associated with this genre. It kind of felt like Blakeson and his team blew all their production money in the first 20 minutes of the movie and are left with a “limited” budget for the rest of the movie. Those walking into the movie and expecting to see a full scale intergalactic battle like Independence Day or imaginative creature designs like in the Alien movie franchise will be gravely disappointed with The 5th Wave (think more on the lines of Invasion of the Body Snatchers rather than War of the Worlds). After its initial 20 minutes of exciting and alluring backstory, the film become generic and almost formulaic to past YA / teen endeavors (whether book or film). Personally, the movie just feels lackluster with its narration slowly moving along its way scene by scene with little dramatic punch to help elevate its entertainment value. Even the feature’s “big” twist comes across with a lackadaisical effort (I initial guess what it was going to happen way before it happened). 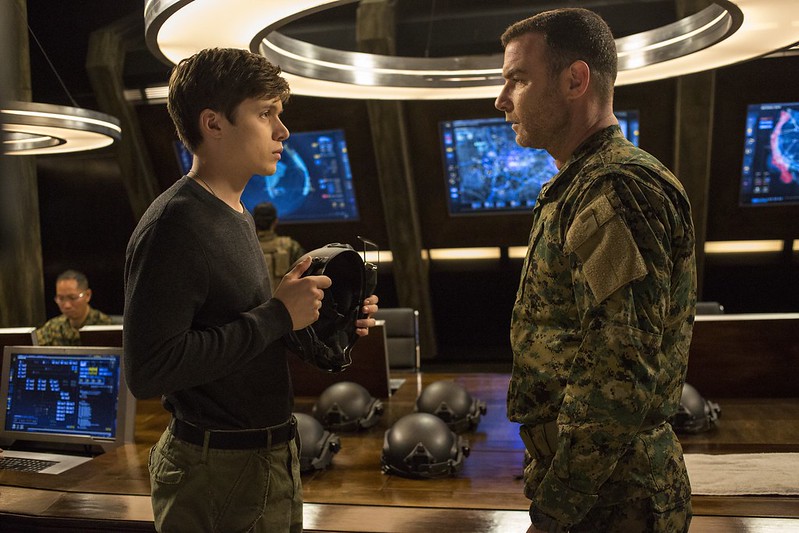 In truth, the feature has some considerable pacing problems. Speaking in general, most of the movie involves talking sequences with various characters (consisting of exposition scenes) and walking through the woods, which sounds very dull. I literally started to fall asleep during the second act, which is not a good sign for a movie that I played money to see. There is some action in the feature, but even that is very sparse and considerably stiff compare to similar dystopian movies. There’s even a “romantic” connection added into this post-alien invasion Earth, which seems more forced and clunky than what was intended. They even try to add a “love triangle” into the romance, which is almost laughable if you think about.  And you know…. nothing says a dystopian end-of-the-world adventure more than having teen “romance” melodrama playing thought out the story.

Kick-Ass star Chloë Grace Moretz plays The 5th Wave’s protagonist in the movie Cassie Sullivan. Personally, I think that Moretz does a good job in her role, portraying Cassie as a realistic teenage girl that gets caught up in some “extraordinary” situations. It also helps that she pretty to look at, even in a world overrun with death and destruction. Behind her (as in a lead role) is the character of Ben Parrish (later nicknamed Zombie), played by Nick Robinson. Robinson does an effective job as Ben, holding his own with his co-stars and his own side-story. While Cassie and Ben are two points of a love triangle, the last point belongs to character Evan Walker, played by Alex Roe. He’s definitely meant for eye candy for Cassie and as her protector as the story unfolds. Roe’s isn’t the most charismatic, but he gets the job done.

In more supporting roles, actor Liev Schreiber plays the ambiguous military leader Colonel Vosch. While Schreiber’s presence brings weight to the film (consisting of mostly younger and / or unknown stars), his character is, more or less, one-dimensional. Still, Schreiber does what he can for the role. The same goes for actress Maria Bello who plays the standard tough-as-nails military officer Sergeant Reznik as well as actress Maika Monroe’s character (Ringer), a teammate in Ben’s squad, who seems to try a little too hard to get into her stereotypical character. Speaking of Ben’s squad, this ragtag group of kids with nicknames like “Poundcake”, “Dumbo”, and “Teacup” are pretty much forgetful in the movie. Lastly, actor Ron Livingston as a small stint in the movie as Cassie’s dad (Oliver) and very, brief appearance (almost like a cameo) is Sons of Anarchy alum Maggie Siff, playing Cassie’s mother (Lisa).

As a finale note, the movie’s narration feels incomplete with a lot of unanswered questions by the time the credits begin to roll, presumably to be continue and further developed in its intended sequel. Its annoying, but to be expected for a potential movie franchise. However, my expectation of seeing the next chapter of Cassie Sullivan and her battle against “The Others” is slim to none.

Attempting to follow in the theatrical footsteps of The Hunger Games, Maze Runner, and Divergent, Blakeson’s The 5th Wave feels like a feature that desperately wants to be like its lucrative forefathers, but is completely out of reach from its realized goal. I’ll admit that its premise is intriguing, its first act is visually appealing, and Moretz proves strong enough to be an effective in feature’s protagonist role. Unfortunately, the film becomes unstable, riddled with a sappy romantic sub-plot, considerable pacing issues, and an overall lackluster in its theatrical proceedings. Fans of the books or of teen dystopian novels in general might give the movie a shot in theaters, but, for everyone else, The 5th Wave is a passable rental at best or (as a better option) skipping the feature entirely. To me, it was vaguely entertaining and a far cry from what it wanted to be. That being said, I still plan on reading the books in the foreseeable future as I doubtfully expect to see “The Infinite Sea”, the next installment in the series, in theaters anytime soon.

The 5th Wave is rated PG-13 for violence and destruction, some sci-fi thematic elements, language and brief teen partying