Whether you like them or not, director Michael Bay is good at creating summer blockbuster movies, with the usual constant barrage of lengthy action sequences, mayhem, and multitude explosions of blowing S**t up. For actions buffs out there, Bay has created several standout features, including The Rock, Bad Boys, and Transformers. However, while he ventured into a more cinematic historical aspect with 2001’s Pearl Harbor, Bay’s recent movies have fallen under heavy criticism due to his excessive action, especially those found in the Transformers sequels. Now, trying to legitimizes himself again more than blockbuster director, Michael Bay gears up for another historical disaster movie with the film 13 Hours: The Secret Soldiers of Benghazi. Does this theatrical retelling resonate with its true story account or is it just another run-of-the-mill Michael Bay film that dosed in MBF (Michael Bay Fatigue)?

After the fall of Muammar Gaddafi, the nation of Libya as dissolved into chaos, with warring militias factions arms themselves with stockpiles of weapons, while political / diplomatic foreigners are fleeing war-torn country. Remaining active in Libya is an American diplomatic compound, a nine acre fortified sanctuary that’s home to Ambassador Chris Stevens (Matt Letscher), who continues to conduct his peace-keeping business in these violate times. Nearby the ambassador’s compound is a C.I.A compound, overseen by Bob (David Costabile), which houses ex-military security contractors, who, in turn, are unsure of their true purpose in the area. On September 11th, 2012, violence erupts, with a Libyan militia soldiers storming the American Embassy, looking to kill Ambassador Stevens and any want American who stands in their way. Called into action, the C.I.A’s security team is unleashed as soldiers such as Tyrone “Rone” Woods (James Badge Dale), Mark “Oz” Geist (Max Martini), Dave “Boon” Benton (David Denman), John “Tig” Tiegen (Dominc Fumusa), Kris “Tanto” Paronto (Pablo Scheriber), and seasoned newcomer Jack Silva (John Krasinski) gear up to protect the compound, scrambling to fend off their attackers as the barrage of firefights rages on overnight, with battle fatigue and the hope of survival weighing heavy on them as they stand ground and wait for American reinforcements to arrive.

Like I said above, director Michael Bay has become “the butt” of every joke of making blockbuster movies. Personally, I think his older movies are better than his more recent ones as I grew up watching a lot of them (The Rock, Bad Boys, and Armageddon). To me, the first Transformers was really good, but then its sequels became to bloated, boring, and excessive. Like many, I believe that Michael Bay sort of plateau with his earlier works and is recent features were becoming mediocre and more for the “blockbuster masses”. That’s why I was interested when I heard that Michael Bay was going to be doing a feature film on the 2012 Benghazi attacks (i.e. no silly robots or heavy CG sequences). After seeing the movie, I felt that 13 Hours was a solid action movie that played to Bay’s strengths (as well as some weaknesses) as well as respecting its source material. It wasn’t Bay’s best, but it was ten times better than some of his more recent film projects.

Drawing from Mitchell Zuckoff’s 2014 book “13 Hours: The Inside Account of What Really Happened in Benghazi”, Bay gives 13 Hours as “blow by blow” theatrical account of the Benghazi attack, following six-men team throughout their hellish ordeal to secure the American embassy (and Ambassador Stevens) as well as defending their own compound. Similarly, Bay creates the world of 13 Hours as an old western set in a modern times, with Benghazi acting like the western frontier (no stability or natural government order) and the American Soldiers holding off their attackers in a “remember the Alamo” type way. Additionally, as I said above, Bay’s greatest strength is in action and blowing s**t up and 13 Hours gives him that platform to do so. Given its subject matter, the story is very intense and so is its action with pulse-pounding gunfire, explosive bombs, and suspenseful thrills throughout the entire movie. There’s also a few pocket scenes with humor, which sort does lighten the mood for during the overall gravitas of the heavy action sequences. Whatever your stance on Michael Bay is, he surely utilized his action strengths for this movie. As a side-note, the musical score in the movie (scored by Lorne Balife) is pretty good with enough rousing / sympathy melodies and heavy drum percussions.

The 2012 Benghazi terrorist attacks has been a fix center point in current events. Since then, the topic of Benghazi (and the events that surround it) have become a heated debate amongst many (both in the government’s political parties and opinions amongst civilians). While I won’t bore you guys with my political stance on the whole “Benghazi” event, I find it interesting that Michael Bay doesn’t point fingers and steers 13 Hours away from being a political military drama. He focuses the camera lens squarely on the American soldiers and their lengthy overnight battle with the waves of Libyan militias; setting up more of an action-oriented movie rather than drama of back-room talks amongst upper echelon government officials. There’s still a slight undercurrent of political pushback in the movie, but, for the most part, Bay doesn’t delve into that foray. In a nutshell, 13 Hours is less Zero Dark Thirty and more of Black Hawk Down.

Its matter of a viewer’s perception and expectations of watching 13 Hours as some, who appreciate grisly portrayal of “based on a true story” military combat (similar to Lone Survivor and American Sniper), will thoroughly enjoy it, while others, who wanted the film to explore the political debate behind the real life account and so elevate the movie beyond being a bombastic action flick, will be disappointed.

Moving past the real-life account of it all (if you imagine it solely as a theatrical feature film), 13 Hours can’t escape some commonplace criticisms that usually accompany a Michael Bay film. Clocking in around 2 hours and 24 minutes, the movie feels long with a good helping of MBF (Michael Bay Fatigue) settling in and out of various scenes. While there’s plenty of action, gunfire, and explosions (which I do like), perhaps the movie could’ve been trimmed down to a more satisfying running time. In terms of camera work, Michael Bay is well-known for loving the “shaky camera” (an effect that works well in moderations). However, this effect is in full force in the movie (I put this as a slightly caution for those who get motion sickness) and, combined with the movie’s low light and a lot of frenetic chaos, it does become sort of confusing of who’s who in a particular scene or to what’s happening in that particular scene.

The movie’s main leads (the “Secret Soldiers” in 13 Hours) aren’t fully developed beyond the recognizable war film genre (i.e. the comedic jokester, the philosophically individual, the family man who can’t escape the “theater of war, etc.) However, the movie benefits from having a talented cast of character actors to bringing its primary characters to life on the big screen. The Office alum John Kransinski, who packed on extra muscle for the movie, delivers a good performance as the film’s quasi-protagonist Jack Silva, lending his acting ability and on-screen charisma to the proceedings. Similarly, actors James Badge Dale, Pablo Schreiber, Dominic Fumsa, Max Martini, and David Denman (another Office alum) do fine work in their respective roles as Rone, Tanto, Tig, Oz and Boon, giving the feature its authenticity of humanity. More to the point, with the exception of Pearl Harbor, the central characters in 13 Hours are the most “human” characters in a Michael Bay film. All in all, these six actors, while the characters are not completely well-rounded, pay respect to their real-life counterparts.

Unfortunately, David Constabile’s character Bob, the C.I.A’s Annex Chief in Benghazi, can only so much as the stereotypical, authoritative (and sniveling) boss figurehead that stand’s as an obstacle for the “Secret Soldiers”. The same can also be said for some of the C.I.A members in 13 Hours, including actors Freddie Storma and Alexia Barlier. The only two supporting characters that make their on-screen presence / character known is Toby Stephens’s Glen “Bub” Doherty, a stationed Tripoli Global Response Staff Officer, and Peyman Moaadi’s Amahl, a Libyan translator aide who does his best to help, even after the terrorist attack begins

As a last side-note, because of the Benghazi attacks have been well-documented by the government and the media, majority of people will probably already know the outcome of 13 Hours before the film reaches its ending (i.e. those who lived and those who died, etc.). This is usually common for movie that are “based on a true story” as the real life account of the subject matter might possibly deflate the movie’s impact. 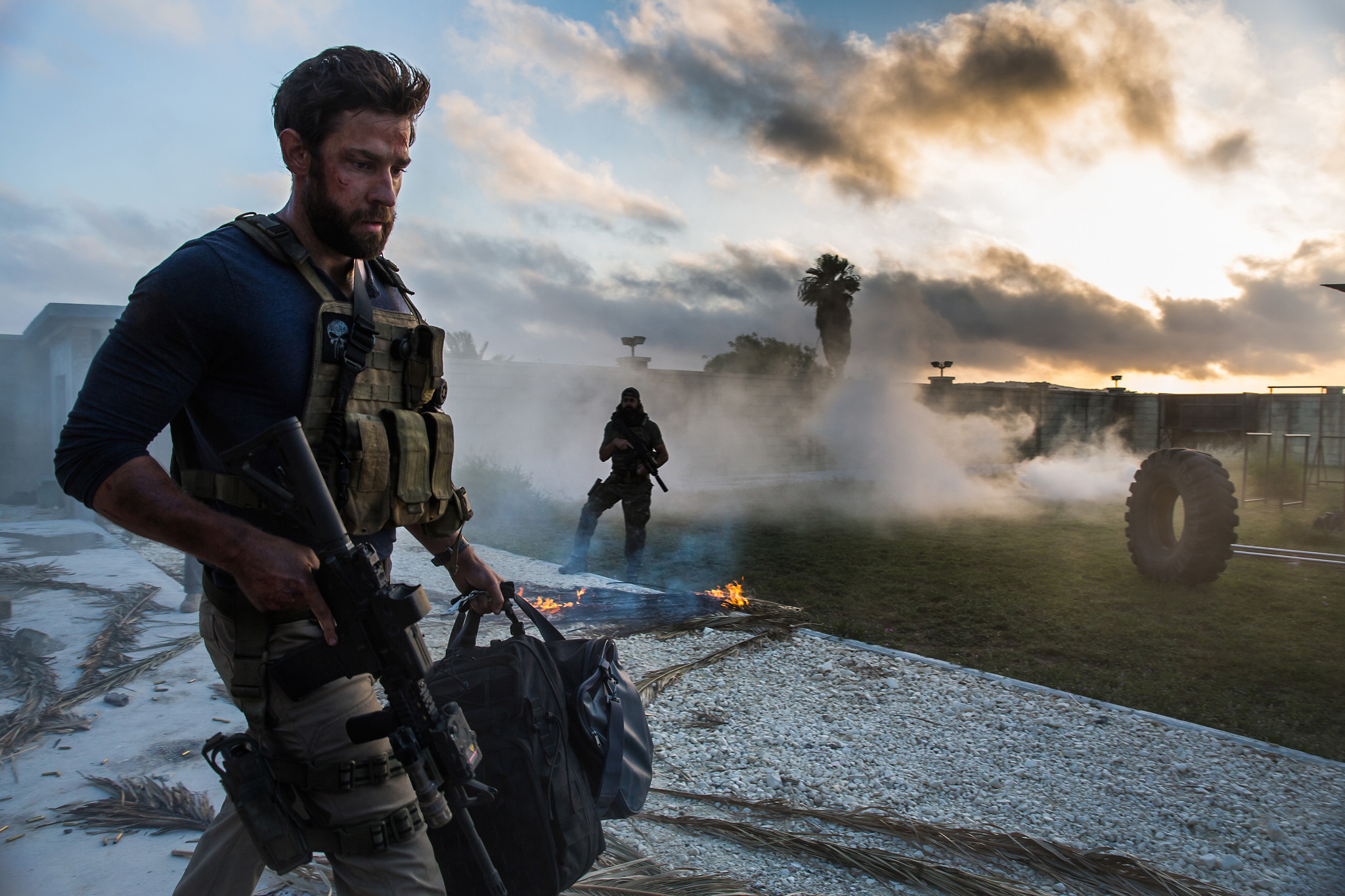 The definitive verdict for 13 Hours: The Secret Soldiers of Benghazi is an ambiguous one, one that might vary from viewer to viewer. While certain elements of the movie are slightly bloated, overblown, and underutilized to its fully extent, Michael Bay’s newest movie is indeed a solid and entertaining action / thriller feature that plays to the director’s known signatures in painting a broad theatrical retelling of the Benghazi attack. The film will undoubtedly prompt many to debate how the film portrays the events of 2012 attack and what its political message means (which was more or less absent in the movie). To me personally, I loved it. It was a great action movie, one that had poignant meaning to it, while also satisfying my adrenaline action junkie appetite. Thus, I believe that 13 Hours is a higher quality movie from Bay’s recent works and it’s a step in the right direction for the director. As I said earlier, enjoying 13 Hours is a matter of a viewer’s perception and expectations for the film. Thus, I recommend filmgoers to go see the movie (its definitely worth seeing in theaters) and form you’re own opinion on it.

13 Hours: The Secret Soldiers of Benghazi is Rated R for strong combat violence throughout, bloody images, and language