Film director Quentin Tarantino has always produced some interesting films throughout his career, including iconic films such as Pulp Fiction, Reservoir Dogs, Kill Bill (volume 1 and 2), and Inglorious Basterds. Following the critical success of his last picture Django Unchained, Tarantino announced on November 2013 that his next film would be another western drama titled The Hateful Eight. Unfortunately, after the script was leaked online on January 2014, Tarantino decided to cancel nixed the movie altogether, with the idea of releasing The Hateful Eight story has a novel). After doing a live-reading of the script several months later, the famed director changed his mind again and rewrote a new ending to the screenplay, setting a production start date for the movie at the end of 2014. A year later, The Hateful Eight, Tarantino’s eight film, is finally complete and ready for its theatrical release. Does Tarantino’s latest movie deliver on the director’s unique style of filmmaking or is it a tedious western humdrum version of the board game Clue?

A tumultuous blizzard has settled in over the wilds of a post-Civil War Wyoming, leaving Major Marquis Warren (Samuel L. Jackson) stranded in its hazardous conditions. Stopping a passing stagecoach that’s on its way to Minnie’s Haberdashery, a mountain pass rest point lodge, Warren encounters the bounty hunter John Ruth “The Hangman” (Kurt Russell), who’s escorting the outlaw prisoner Daisy Domergue (Jennifer Jason Leigh) the nearby of Red Rock for her hanging. Agreeing to tagalong for the ride, Warren joins Ruth and Domergue in their stagecoach just as Chris Mannix (Walton Goggins), a former Confederate soldier and now the newly appointed sheriff of Red Rock joins the uneasy party. Arriving at Minnie’s to escape the raging blizzard, the unlikely company settles in, sizing up the other customers at the rest point, including Oswaldo Mobray (Tim Roth), Bob (Demian Bichir), General Sandford Smithers (Bruce Dern), and Joe Gage (Michael Madsen), while stagecoach driver O.B. (James Parks) tries to keep out of the way. As Ruth keeps a steely eye on Domergue, the strangers at Minnie’s Haberdashery attempt to figure one another out (separating fact from fiction in each of their backstories) as paranoia ensues and violent acts unfold.

I have seen majority of Tarantino’s movies and, while I do highly enjoy them, I’m not as fanatical as some moviegoers are when watching them (which there’s nothing wrong with). Also, while a lot of people think that Django Unchained was best Tarantino movie to date, I personally think that Inglorious Basterds is his best film project, balancing a story with humor, character drama, and Tarantino’s style of moviemaking. After hearing all the rumors of The Hateful Eight (it being leaked and all), I never thought that Tarantino was going to make the movie. Of course, I was wrong as he did make it into feature film and, after seeing it, makes a very welcomed addition to his career, with The Hateful Eight delivering on period piece character drama with a clever script and, above all else, well-performed.

Those moviegoers who are hoping for a big and grandiose story from Tarantino, similar to Kill Bill, Inglorious Basterds, and Django Unchained, will find The Hateful Eight to be a little more of a restrained moviegoing experience. Sure, Tarantino has a big vision for the movie, but on a much smaller scale, with the film’s primary set in Minnie’s Haberdashery and a few exterior shots that dot the feature. Additionally, at its cinematic core, The Hateful Eight is more of a character drama than anything else. The film utilizes its time period of the post-civil war era in the frontier of Wyoming for the conversation and dialogue between its cast of characters. Also, while the movie is sort of labeled as a western detective mystery story, don’t expect it to be a classic stereotypical western Hollywood movie. And yet, there’s still plenty of standard western troupes to be found in this feature. In short, The Hateful Eight doesn’t rely on being a “spectacle”, but rather an intriguing cast of characters by placing them all in remote location and figuring out each other’s personal agendas and deceptive backstories.

Speaking on a technical level for the movie, cinematographer Robert Richardson must be mentioned for bring The Hateful Eight to a very cinematic scope with the usage of the 70mm projection. I did get a chance to see the movie 70mm and sure does the movie just, with the camera lens focusing on wide shots of the frozen wilds of Wyoming and intricate details of fully capturing of Minnie’s Haberdashery. For those who don’t know, The Hateful Eight has two cuts being shown. The first is the standard digital screening, which presents the movie in a regular digital format with a running time of 167 minutes, while the other is presented on a 70mm projector, which is called the “roadshow” release and runs a bit longer with runtime of 187 minutes with additional scenes and a 12-minute intermission (set between chapter 3 and 4 of the film).

Perhaps the only problem I have with The Hateful Eight is that it was too long. As said, I did see the roadshow version of the movie and, with the film clocking in a little bit over 3 hours long, it can consume a lot of time and drag the story’s narration out than what was needed. Possibly shaving off scenes here and there could’ve of possibly been beneficial to the movie’s entirety. As a side-note, the music for The Hateful Eight is great, filled with an appropriate score by famous spaghetti western composer Ennio Morricone that fits the movie perfect.

As one would expect from a Tarantino movie, The Hateful Eight is a solid R-rated movie and with good reason. There’s plenty of blood (lots of it), gore, violence, vulgar obscenities, sexual content, and racial remarks to turn-off the more sensitive moviegoers. Again, this is a Tarantino movie with all the proactive and violence angst (as well as its quirks) that usually accompany his theatrical releases. Additionally, keeping up with Tarantino’s style, the movie is spilt up into various parts (labeled as chapters).

As far as acting goes, The Hateful Eight has a terrific ensemble cast that’s lock and loaded to provide its viewers with some intriguing characters. As one would expect, each actor delivers a solid performance in their roles with each given enough time to explain their backstory and weaving their own deceptive doubts to its audience. Samuel L. Jackson once again provides a memorable role with his character of Major Marquis Warren, ensuring Jackson’s on-screen counterpart to be the film’s scene stealer. In a similar fashion, Kurt Russell’s character of John Ruth as an equally charm and sure does bring an on-screen presence to his brutish and foul-mouth temper “Hangman” persona.

Sharing most of the screen time with Russell, Jennifer Jason Leigh is another force to be reckoned with as the foul-mouth prisoner outlaw Daisy Domergue as Bruce Dern finds humanity the crotchety old (and racist) character of General Sandford Smithers. Following those two, fans of actor Walton Goggins will like his performance in The Hateful Eight as Chris Mannix, the outspoken new sheriff of Red Rock, just as actor Tim Roth chews through his scenes with delight with his character of Oswaldo Mobray. I kind of felt like Demian Bichir, James Parks, and Michael Madesn were, more or less, understated in their respective roles, but still give quality performances when on-screen. 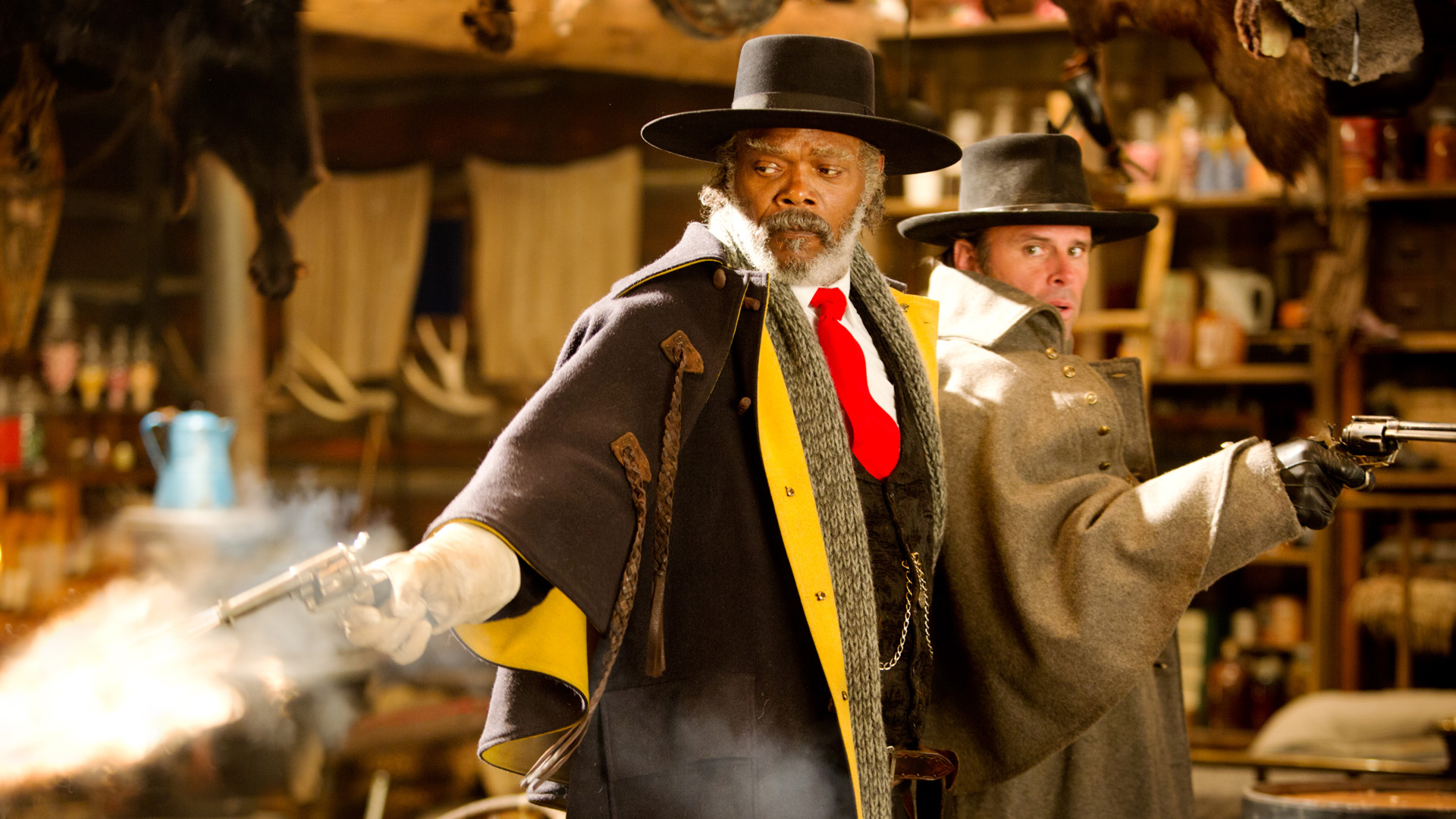 Fans of Quentin Tarantino movie will rejoice with glee in his newest film The Hateful Eight. Armed with a intricate and intense story that’s filled with humor, deception, blood, and loaded guns, The Hateful Eight is an alluring western mystery that’s made up of great performances and a quality production. Though the movie is quite long and some scenes could’ve been reduced to speed things up, a viewer cannot deny Tarantino’s gripping and visual tale. Personally, the movie was great and well worth the price of a movie ticket to see it in theaters (and perhaps again a second time). It wasn’t the absolute best Tarantino movie (in my opinion), but it’s definitely a must-see and very welcomed addition to the director’s filmography. In the end, I praise Tarantino for making The Hateful Eight into a feature film and not limited to the confines of a novel’s written pages.

The Hateful Eight is rated R for strong bloody violence, a scene of violent sexual content, language and some graphic nudity