A HILARIOUS (YET FAMILIAR)

The comedic actress styles of both Amy Poehler and Tiny Fey are highly enjoyable and entertaining. Hitting their comedys strides during stint on SNL (Saturday Night Live), the duo collaborated in the 2008 comedy Baby Mama and shares some great on-screen chemisty of playful banter. Since then, the pair have created some memorable roles over the years in their various projects, further establishing themselves as a comedic actress (individually) as well as a comical and dymanic duo when paired together (this includes seveal reprisals at co-hosting the Golden Globes). Return to share the screen play with their shenngians, Poehler and Fey reunite for the comedy filled feature Sisters. Does the movie hit its mark or is it just a bland attempt at getting a few cheap laughs (as well as your cash)?

After being recently divorced, Maura (Amy Poehler) maintains an uptight (but positive) life of responsibility, while her sister sibling Kate (Tina Fey) is hotheaded and unemployed. After their parents, Bucky (James Brolin) and Deana (Dianne West), share with unexpected news that they’re selling their childhood home, Maura and Kate are upset, forcing the pair to clean out their room before the inspection of potential buyers. Revisiting their childhood of past memories, the sisters decide to throw one last “blowout” party, inviting all of their high school pals, while trying to exclude their former judgmental classmate Brinda (Maya Rudolph). With boozes, drugs, sexual foreplay, and free rein of the entire house, Maura and Kate push the initially gathering into a wild and crazy event as personal issues come to light, including Kate habitual irresponsibility as an adult and Maura’s romantic interest in her friendly neighbor James (Ike Barinholtz). 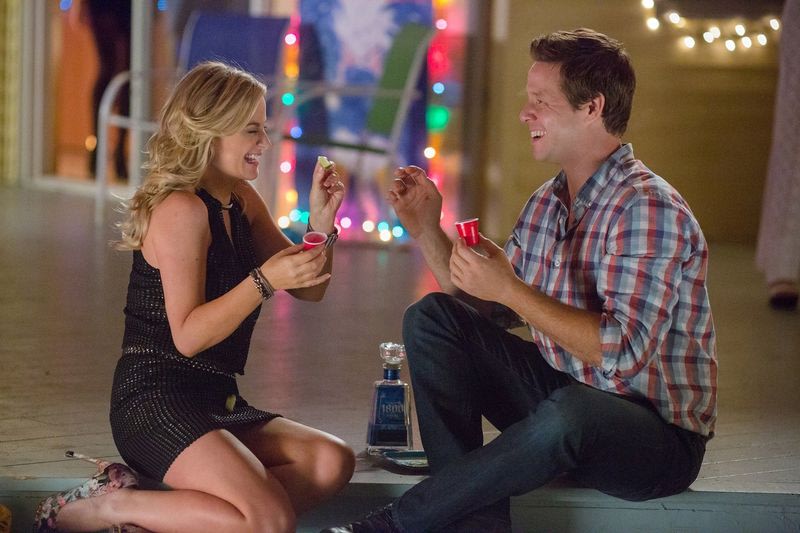 While I do like both Poehler and Fey as comedic actresses in their various TV / film projects, I actually haven’t seeing Baby Mama (but I plan to in the coming months). As for this movie, after watching the trailer, I was genuinely curious (but more on the comedic aside) to see Sisters when it came out in theaters. Though, I did question (and still do) why Universal Pictures released this movie on the same date as the highly anticipated Star Wars: The Force Awakens. Did they really think it stood a chance against such a movie? (who knows). Yet, all of that is now in retrospect as Star Wars: The Force Awakens has become a global phenomenon, breaking box-office records left and right. As for Sisters, after watching it, I felt was a hilarious movie that offered some great comedy (especially from chemistry of its two leads) but faltered at its more serious moments and conventional plot narration.

Following his success of the film Pitch Perfect (such a good movie. Gotta love those Barton Bellas), director Jason Moore helms Sisters, staging the theatrical proceedings in a straightforward and clean (in an adult raunchy comedy) fashion. In terms of visual comedy, the movie is almost devoid of it in during the movie’s first half as Moore relies mostly on dialogue-driven scenes from its on-screen actors / characters. However, that all changes when the second half of the movie starts and the feature’s big party gears up and (ultimately) explodes as Sisters (the film) becomes more creative and funnier in its comedic visuals. There’s plenty to laugh at in the movie with a great variety of comedy styles and tones from crude slapstick to crass one-liners and even a couple over-the-top scenarios. Some people might think some of Sister’s jokes and gags are hit and miss, but I found them to be really funny and helped elevate the movie from being just another generic adult comedy movie of this popular genre. It just all depends on where your sense of humor lies.

The movie’s comedy is aided by longtime SNL writer Paula Pell. Pell plays fast and loose with the film’s narration, providing room for several extended comedy sketches / sequences to play out with gleeful R-rated fun. However, Sister’s plot is, for lack of a better term, is overtly predictable and slightly sluggish in its pacing (most notable in the film’s first and third act). There are some moments sincere pathos and defining character arcs, but the result is formulaic and slightly unoriginal.

In truth, Sisters is the classic take on high school / college party sub-genre of comedy films as various (if not stereotypical) characters that are commonly associated with these movies are presented (i.e the mean girl, the horn-dog, the funny guy, etc.). The only thing missing was the big shot football jock archetype that didn’t do well after high school / college. While the final product of the movie is still serviceable and in good fun, I kind of would’ve liked to seeing something a little fresher and new into this narration structure rather than the one too many iterations that have come before.

Naturally, Amy Poehler and Tina Fey are highly enjoyable in the roles in Sisters. The two are complete opposites as Poehler’s Maura is a positive and upbeat thinker, while Fey’s Kate is a foul-mouthed and irresponsible. It’s easy to see that the pair are having a grand time throughout the entirety of the movie as their on-screen chemistry is spot on and is probably one of the greatest strength in Sisters. Additionally, several other actors and actresses (in more supporting roles), help energize the movie through either physical or verbal comedy, including SNL veterans Maya Rudolph as the judgmental Brinda and Bobby Moynihan as funny man Alex. Other notable side characters in this capacity are John Leguizamo as Dave (the shady and slightly horny liquor store owner) and Ike Barinholtz as James, a neighbor who partakes in catching Maura’s eye as a sweet and humorous love interest subplot in the movie.

The film’s supporting cast also helps elevate the movie, playing small (but key roles) in various scenes throughout and being comprised of several talented comedians who are willing join in the R-rating party frivolities that Sisters caters to. Greta Lee, Dianne West, and James Brolin lend their comedy side to the feature as a quiet nail salon worker and as the parental figures to Maura and Kate. Also popping up in the movie are Samantha Bee, Santino Fontana, Britt Lower as recognizable faces. However, to me, similar to what he did earlier this year in the comedy Trainwreck, actor / WWE wrestler John Cena wins the award for best-scene stealer in all of Sisters as the heavily-tattooed drug dealer named Pazuzu (and yes that is his character’s name).

Poehler and Fey party hard in the comedy Sisters. Moore’s “party house” movie has its moments of weakness, with several pace problems and sharing of familiar staples and troupes (story, characters, themes, etc.) in similar films that have come before in this movie subgenre. However, the comedy aspect is hilarious and on-point (depending on your sense of humor) with some crazy antics from its cast, especially from the film’s two central leads. As a result, Sisters isn’t as original and innovative as it wants to be, but is still definitely a funny and entertaining movie to watch and worth a glance in theaters. If you’re looking for straightforward R-rated comedy (and don’t expect something deep and meaningful) or if you are just a fan of either Amy Poehler or Tina Fey, then Sisters is the movie for you to watch, escape for a few hours, and join in the epic party festivities (as well as its on-screen absurdities).

Sisters is rated R for crude sexual content and language throughout, and for drug use