Earlier this year, Pixar Animation released its first of two movies for the year of 2015 with the film Inside Out. The film, which told the story of a human girl named Riley and the 5 distinguishable emotions that control (Joy, Sadness, Fear, Anger, and Disgust), was masterfully accepted as Inside Out received critical praise from critics and fans as well as gaining box-office success, making the film the 3rd highest grossing movie of the company as well as reestablishing the company’s dominance of crafting quality animated movies. Now, Pixar Animation release its 2nd movie of 2015 (the company has never released two movies in one year) with the pre-historic adventure film The Good Dinosaur. Does the movie find its mark, keeping up with the momentum from Inside Out, or does it get lost in its own CG wilderness? 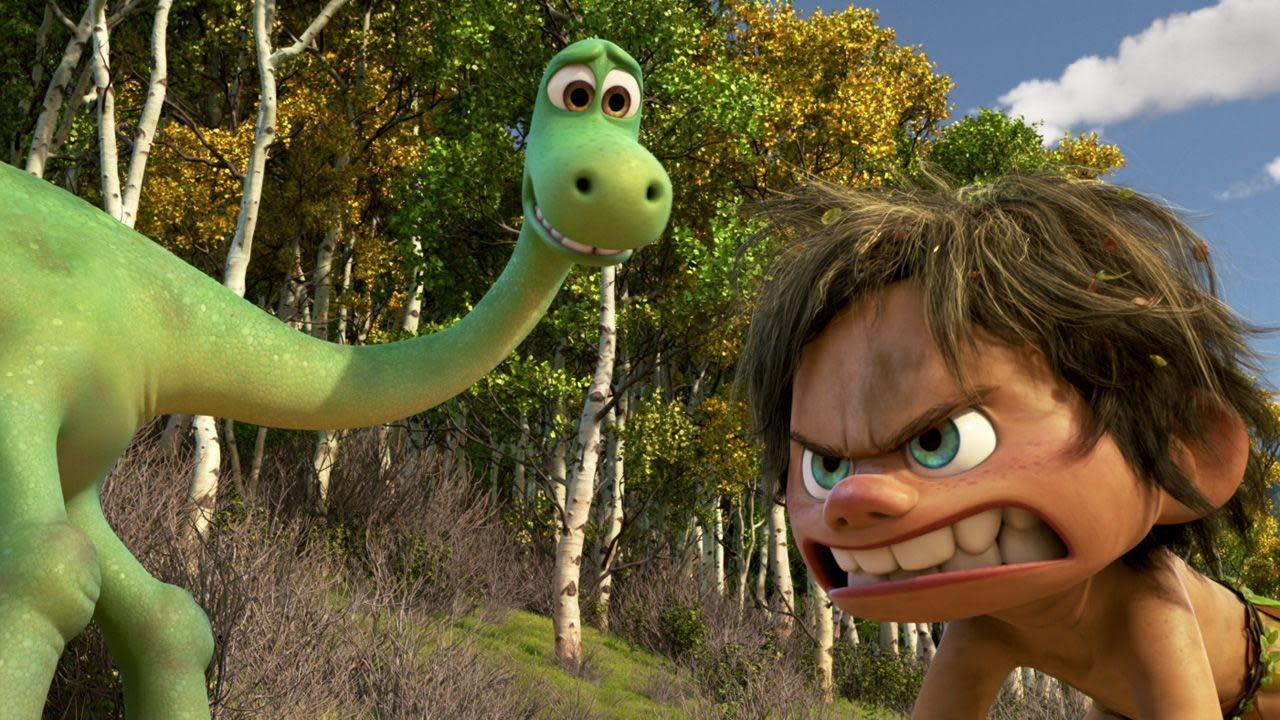 65 million years ago, a meteor missed its collision with Earth, sparing the dinosaurs from going extinct. Millions of years later, an Apatosaurus named Henry (Jeffery Wright) and his wife Ida (Frances McDormand) have built a farm homestead for themselves, growing and harvesting corn with help from their three children, including their runt off-spring Arlo (Raymond Ochoa). A tiny Apatosaurus who constantly struggles with fear, Arlo tries to supportive parents, but can’t seem to make his “own” mark. After a sudden tragedy strikes, Arlo is determined to make his mark, only to be distracted by the appearance of Spot (Jack Bright), a small feral human child who loves to snack on the dino family’s winter rations of corn. In an attempt to hunt Spot, Arlo is separated from his family’s homestead, swept into the wide unknown wilderness and completely lost. Reluctantly won over by Spot’s canine-like loyalty, Arlo finds comfort in an unlikely friend as the pair set out to return home, encountering challenges along the way as well as a handful of some friendly and unsavory creatures.

Like many who saw the movie, I absolutely loved Inside Out, especially the five expressive emotions of Riley (Fear was my favorite). It charming, witty, imaginative and thought-provoking; I even shed a tear or two at the film’s ending (and yes…I will admit that). Truly, the movie was great way for the animation studio reiterate its stance on high quality features with some great (and sometimes emotional) stories to tell. Of course, I saw the trailer for The Good Dinosaur when I saw Inside Out and was curious to see where Pixar would take this prehistoric adventure. After seeing the viewing the movie, I found that The Good Dinosaur, while it doesn’t raise the bar in its storytelling or excel at being the best (in other areas), still proves to be unique enough leave its own identity and find its own mark.

In case you didn’t know, the overall production of The Good Dinosaur was very much publicized as a being a turbulent undertaking. Originally conceived by Peter Sohn, who previously directed the Pixar short film “Partly Cloudy” and has worked for Pixar as an animator / story artist, and Bob Peterson, the co-writer / co-director of Up, The Good Dinosaur was scheduled to be released in November 2013. However, the feature was rocked with internal issues, including Peterson’s departure from the project as well as producer John Walker (who was replaced by producer Denise Ream). With all this “changing of the guard”, the movie was delayed and shuffled from year to year (changing the original release date of November 2013 to May 2014 and then changed again for final date of November 2015). Even the original cast for The Good Dinosaur was dismantled and reassemble with a new brand new one (with the exception of Frances McDormand) as well as the movie’s story. Yes, that’s quite an overhaul for 92-minute animated movie.

Perhaps it is this reason why The Good Dinosaur doesn’t resonate as strongly as some of Pixar’s best and brightest in its catalogue history. As a whole, the movie is part classic “coming of age” story around two completely different individuals and part “a boy and his dog” scenario (i.e. the boy being a dinosaur and the dog being a human). Being a Pixar movie, the film touches upon a meaningful theme of learning how fear is something that an individual must learn to live with (not conquer it); a powerful statement indeed. However, The Good Dinosaur doesn’t go deep enough to fully explore that meaning, which Pixar films usually do. As for the story itself, the narration deeply treads into an “all-too familiar” territory (the movie felt like it was a cross between 2002’s Ice Age and 1993’s Homeward Bound: An Incredible Journey), which causes the movie to feel very formulaic and predictable. A shame as Pixar is coming off of such a poignant and creative narrative from Inside Out. In conjunction with that idea, the movie’s tender moments, which are a bit emotional and are widely known for being commonplace in a Pixar movie, seem a tiny bit manufactured as if Pixar is just “going through the motion” of trying to drum up “sympathy tears” from it viewers on a clockwork precision. That’s not to say I didn’t tear up slightly (which I did), but I kind of have that feeling that they are trying too hard now reach that emotional point.

While the film’s narration isn’t the most creative or strongest that Pixar has concocted, the animation for The Good Dinosaur is gorgeously rendered and visually crafted than any other Pixar movie has produced before. Its beautiful panoramic vista shots of bountiful mountain ranges and skies are truly awe-inspiring to see on-screen. This photo-realistic texture style of animation is downright awesome to behold, to me, almost looks like it was real. Never before as an animated movie projected something like water moving or rain falling in such a meticulous and realistic way. In an odd way, this mixture of realism backdrop scenery juxtaposes the somewhat cartoonish design of the some of the characters in the movie (human, dinosaur critter, bird, etc.), but in a good way. As always, colors are rich and are vibrantly displayed, appealing to the optical senses. In short, (and visually speaking) The Good Dinosaur excels in bringing its cinematic world to life. As a side note, I did see this movie 3D and, while the animation is excellent, it’s not necessarily “a must” to see the movie in.

Coinciding with the animation, Pixar approaches The Good Dinosaur with a unique aesthetic, drawing upon a western style motif to this prehistoric feature. There’s plenty of similar western tropes found here including T-Rex cowboy’s / cattle herders, scavenger-like bandit pterodactyls, and group of marauding Raptors. The film’s score, composed by Jeff and Mychael Danna, helps set the mood with several charming rustic melodies that one would occasionally find in old spaghetti western movie. Even Arlo’s family farm is similar to a “Little House on the Prairie” homestead that surrounded by the untamed “new frontier” wilderness. To me, I loved the whole idea of a western vibe and it was a great inclusion to utilized in the making of the movie. Additionally, while the movie has several individual creatures that threating Arlo and Spot’s journey across the wilderness, the unyielding force of mother nature plays a key part (in several scenes) and acts as an impartial bad guy, one that changes temperament from being serenely inviting to life-threating within a span of scene.

Beyond the technical presentation of the movie, The Good Dinosaur is the most entertaining when the camera squarely focuses on its two central leads (Arlo and Spot), which, for the most part, is majority of the film’s running time. Both characters are brought to life by not just their lively vocal performances (Arlo is voiced by Raymond Ochoa and Spot voiced by Jack Bright), but also in how the express themselves through their personalities. Arlo is tad bit fearful and timid (I personally see a little bit of Arlo in me from when I was younger) and an odd mixture for him being a dinosaur, while Spot is equally memorable with his dog-like antics and sublimely boyish tomfoolery. To me, the movie is at its best when the pair is attempting to communicate with each other (one scene in particular stand above the rest as the duo discuss their families). In short, you honestly do believe in the friendship of Arlo and Spot.

Similar to Pixar’s Wall-E, The Good Dinosaur, outside of its two main characters, has several minor characters that are more in the backdrop of the film’s grand scheme, acting like a dangerous obstacles or a helping hand rather than a supportive role. This includes Arlo’s parents, voiced by Jeffery Wright (I honestly couldn’t believe he was voice behind Arlo’s dad) and Frances McDormand as well as Arlo’s siblings Buck and Libby, voiced by Marcus Scribner and Maleah Nipay-Padilla. Others include the T-Rex cattle herders Butch (Same Elliot) and his two offspring’s Ramsey (Anna Paquin) and Nash (A.J. Buckley), and the three scavenger pterodactyls Thunderclap (Steve Zahn), Downpour (Mandy Freund), and Coldfront (Steven Clay Hunter. All lend their voices beautifully and compliment their respective characters, it’s just The Good Dinosaur’s supporting cast won’t be as memorable as past Pixar movies have been.

Lastly, showing before the movie, The Good Dinosaur also includes the Pixar short “Sanjay’s Super Team”, which is worth-noting. Directed by Pixar story artist and animator Sanjay Pate, the short is a smart, beautiful animated, and probably the most energetic Pixar short film that’s inspired by Patel’s relationship with his own real-life father. Honestly, I think these shorts are getting better and better.

If you’re looking for a simple and tender animated movie that doesn’t have ridiculous dance numbers and frivolous pop culture references, then The Good Dinosaur is for you. The 16th animated feature from Pixar Animation isn’t as sophisticated as past endeavors nor is it cited as the very best from the animation juggernaut. Even some of the more emotional scenes seems more manufactured and its storytelling treads into some very familiar territory. Still, thanks to some gorgeous CG animation, a western setting motif, colorful characters, and all around solid voice acting, The Good Dinosaur has enough juice in its tank to still be good animated feature. Personally, it wasn’t the best Pixar feature, but still worth seeing (even if it’s for the visuals alone) and is still better than most family-friendly animated films that are currently out there.

The Good Dinosaur is rated PG for peril, action and thematic elements