Steve Jobs was a man ahead of his time. For better or worse, his genius intellect and insightful knowledge helped drive Apple, a computer company that was on the verge of bankruptcy, to the dominant powerhouse that it’s currently known for. In 2003, Jobs was diagnosed with a pancreatic tumor and died on October 5th, 2011 due to respiratory arrest that was related to the tumor. Many knew the name of the man, but not the man himself. Following his death, many media outlets began to chronicle and catalogue Job’s life, including the poorly received 2013 film Jobs, starring Ashton Kutcher. Two years later, director Danny Boyle and screenwriter Aaron Sorkin try their hand at the iconic man with drama bio-pic Steve Jobs. Does the movie shed light on Job’s life or is too artistic for the average moviegoer?

In 1984, following the success of the Apple II, Steve Jobs (Michael Fassbender) is eager to share his creation, the Macintosh home computer, to the world, anxiously waiting for the press to fill the auditorium for the launch demonstration. Unfortunately, before Jobs can take to the stage, the aloof genius is confronted with difficult backstages problems from a barrage of familiar faces. At his side is his assistant and marketing manager, Joanna Hoffman (Kate Winslet), who works endlessly to contain the chaotic confusion that surrounds Jobs and his Macintosh launch. Tech coordinator Andy Hertzfeld (Michael Stuhlbarg) struggles with complicated technical errors for the demo presentation, while Apple-co founder Steve Wozniak (Seth Rogen) presses Jobs to consider sharing credit for the company’s rise. At the same time, Jobs is also confronted by his ex-lover Chrisann Brennan (Katherine Waterston) and his daughter, Lisa (Makenzie Ross), who’ve come seeking monetary and paternity issues. Adding more fuel to the fire is Apple’s CEO John Sculley (Jeff Daniels), a traditional businessman who is confused by Jobs’s stance on exclusive marketing and design. After the 1984 Macintosh Launch, Jobs’s volatile relationships with these individuals are magnified following two more similar launches in 1988 and 1998. 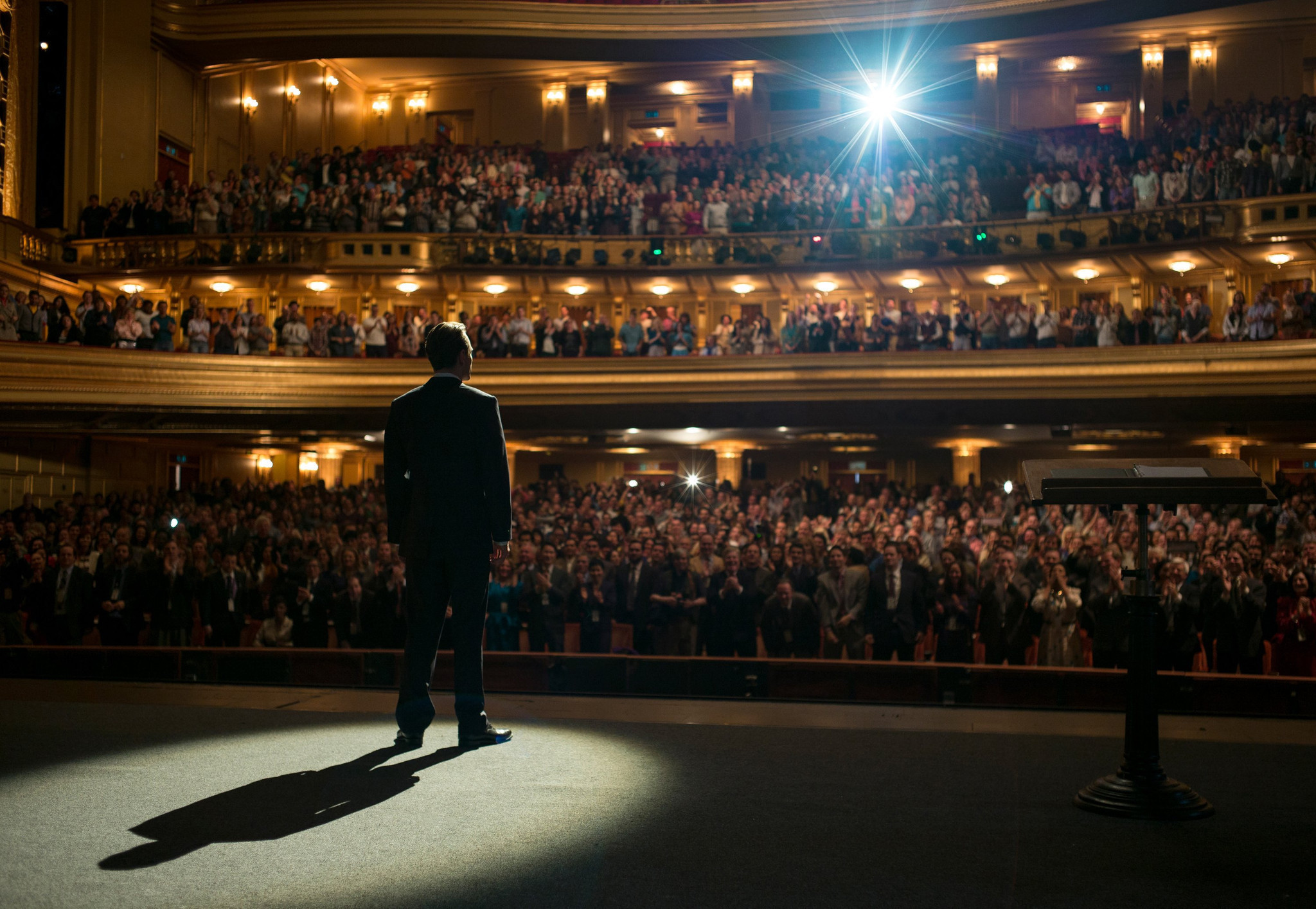 I will go on the record and say that I haven’t seeing the movie Jobs. I’ve heard about it, but never actually watched it. Thus, I can’t truly compare apples to apples (Yes, I made pun) when taking about the difference between Jobs and Steve Jobs. Like many out there, I knew who Steve Jobs was (I knew his involvement with Apple), but not so much into his personal life. I also knew that the movie was to be loosely based off of Walter Isaacson’s celebrated biography on Steve Jobs (though I never read the book). Thus, I was intrigue when I saw the trailers for Steve Jobs and wanted to see how much the movie would delve into Job’s life (both professional and personal). After seeing the film, I felt that Steve Jobs was incredible movie that has a gripping performance in its lead and supporting cast as well as a very unique approach to the film’s narration that some will either embrace or begrudge at.

As a film, Steve Jobs was brought to life by two acclaimed filmmakers, one being screenwriter Aaron Sorkin and director Danny Boyle. The pair lends their talents to the feature beautifully, offering their expertise in dissecting their subject (Steve Jobs) for a theatrical presentation. One of the most interesting aspect of Steve Jobs (and probably the most debated) is how the movie’s narration is structure. Rather than going back to Jobs’s beginning and moving forward in a traditional fashion (cataloguing all the events in his life a chronology order), Sorkin and Boyle decide to make film about three distinct events (the 1984 launch of the Mac, the 1988 launch of NEXT computer, and the 1998 launch of the iMac) with all the dramatic scenes happening thirty or so minutes prior the launches. It’s a very interesting way to structure a movie, one that has its merits of being different and setting itself apart from conventional movie narrations, but can be a little hard to follow for some casual moviegoers. That being said, it’s important to keep in mind that many of the great scenes of the movie are either fabricated or, at the very least, exaggerated to a degree to fit the dramatic conversations in shaping Job’s chaotic backstage moments. As a side note, the movie has some great cinematography elements, provided by cinematographer Alwin H. Kuchler.

In addition, this means that those looking for insightful knowledge into Job’s personal life and the well-documented research into the successes and failures of Apple will be disappointed with a feature film that can be a little hard to discern from what is fact and what is fiction. Personally, I liked the idea of how the movie is structured (it’s an interesting way to pull off the story) and I knew that Sorkin, like his work on Social Network, would fabricate stuff certain things to spice up the entertainment level. In short, Boyle and Sorkin make Steve Jobs out to be a intriguing centerpiece film,  showcasing “how” Jobs interacted with these people rather than pointing out the truth of “what” was actual said.

With such a great emphasis on the central character, the performance of the iconic Steve Jobs needed to be a palpable one and actor Michael Fassbender does an exceptional job at playing Jobs. Fassbender, recognizable for his roles in some of the recent X-Men movies (First Class and Days of Future Past) as well as 12 Years A Slave and the upcoming Macbeth, takes on the role of titular man with an approach that seems very much his own creation (with guiding help from Boyle and Sorkin). Rather than studying him and picking up his speech patterns and mannerisms, Fassbender’s portrayal of Jobs is just fantastic on-screen, showcasing a man’s intellect, arrogances, and vulnerabilities in a way that only Fassbender can theatrically approach such a character. Here’s hoping that Fassbender get some award nods in this upcoming award season for his role as Steve Jobs. He definitely deserves it.

The supporting cast in Steve Jobs is made up of a collective group of very talented (and well known) actors and actresses. Much of the screen time is giving to Fassbender, so his supporting co-stars don’t have much time to steal the spotlight. However, this movie is about how Jobs interacts and confronts these individuals as he moves around from scene to scene. Characters like Michael Stuhlbarg’s Andy Hertzfeld and Jeff Daniels’s John Sculley produce some great dialogue conversations with Fassbender, drumming up some terrific encounters that are entertaining as well as poignant and powerful scenes. To me, the most surprising is actor Seth Rogen who, mostly known for his roles in comedy movies, does a memorable role as the Apple II designer and Apple’s Co-Founder Steve Wozniak. Actress Kate Winslet also turns a great performance as Jobs’s assistant manager Joanna Hoffman, who usually goes toe-to-toe with Fassbender’s character.

Going into his personal life, actress Katherine Waterson plays Jobs’s ex-lover Chrisann Brennan and, even though her part is minimal, delivers a overall good performance. Lastly, Job’s daughter is pivotal and instrumental role in the movie, allowing the tech genius to reflect upon personal growth and humanize his character. Thus, the credit must be giving to the three actresses that play Lisa Brennan (at various points in the movie): Perla Haney-Jardine, Ripley Sobo, and Makenzie Moss.

Danny Boyle’s Steve Jobs will definitely have some mixed views from its viewers. Those looking for a straightforward and well-documented movie about Steve Jobs’s life will be disappointed with the feature. However, those who play along with the movie’s unique setup, will thoroughly enjoy it. I personally thought that Steve Jobs was an excellent movie, one that should viewed by all. From its direction of its distinct three act layout, to its editing and cinematography, to its clever dialogue, and to its terrific ensemble cast (especially Fassbender), Steve Jobs will surely be remembered in film history and will most likely have a couple of spots here and there at the upcoming award season. Geniuses are usually intellectual talented, but are imperfect individuals. Steve Jobs clearly defines that moniker, allowing Boyle and Sorkin to “think different” and play the orchestra in their theatrical portrayal of understanding the man behind Apple.