Seating in a director’s chair can be a difficult challenge when helming a feature film. How you guide the movie’s story from paper to cinematic big screen can prove to be a very trying task as well as how handle the cast and the film crew, working within the film’s budget, and having a clear and concise vision of the movie you want to bring to life. When you’re a first time director, everything is magnified as a viewer’s expectations (as well as studio heads) are invested to see if the feature succeed or fail. Some might underperform in this endeavor, while others like Neil Blomkamp’s District 9 or Alex Garland’s Ex Machina have gained critical acclaim. Making his directorial debut is actor Joel Edgerton with the suspense thriller film The Gift. Does this film from a first time director succeed or should Edgerton simply just stick to acting? 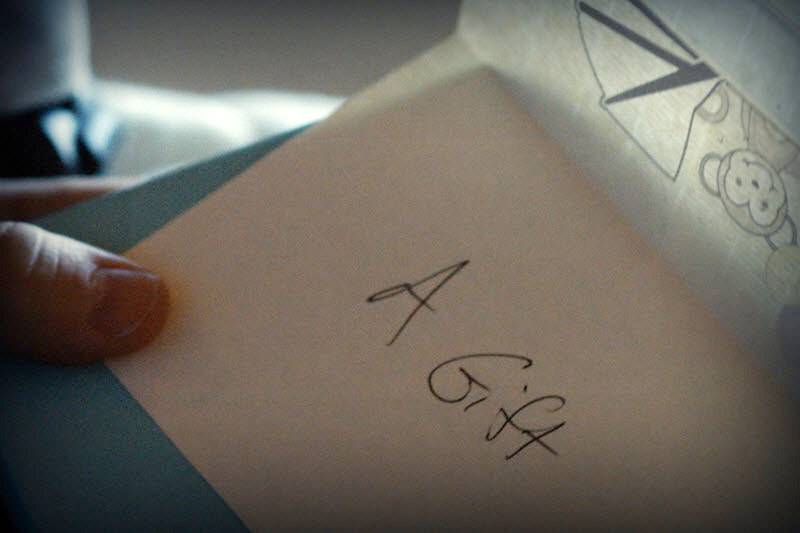 Ready for a fresh start, Simon (Jason Bateman) and Robyn (Rebecca Hall) have moved to Los Angeles from Chicago. Moving into their uniquely modern design house, the couple begins their daily routine with Simon starting his new position at an important corporate job and Robyn working from home, haunted by past memories of a bearing a potential child. Coming into their lives is Gordon Mosley or known as Gordo (Joel Edgerton), Simon’s old classmate and lonely man who wants to reconnect, pushing himself into the pair with generous gifts and visits. While Robyn is intrigued with Gordon’s odd ways, Simon, believing he has ulterior motives, is angered Gordon’s present in their lives, rejecting his friendship and telling him to say away. As more gifts arrive and the couple’s dog goes missing, Simon immediately suspects that Gordon is to blame, while Robyn, insisting there more to it, investigates into the strange man’s past.

I usually don’t like horror movies. I don’t discredit them (or those who like them), I just don’t find the appeal in them. A serial killer murdering a bunch of teens or a dark supernatural being that dwells haunts a house. These don’t do anything for me. I sort got that initial feeling I first saw the trailer for The Gift. The preview, which somewhat tells the premise of the movie, had a lot of the nuances of a horror suspense film that will make you jump and freak out. Thus, I decided to pass on it. However, after hearing word-of-the-mouth from several people, I changed my mind and purchased a ticket to go see it. It may not be the most perfect movie in its genre, but The Gift is an actually a pretty good psychological suspense movie of curiosity and consequence.

As I said previously, The Gift makes Joel Edgerton directorial debut. Edgerton, who has played roles in movies like Animal Kingdom, Warrior, and Zero Dark Thirty, has also previously step behind the camera and contributed to writing and production work for films like The Felony and Rover. The Gift is his own creation with Edgerton executing the feature on multiple levels from inception to final product as director, writer, and actor. The film also has a unique visual style, courtesy of cinematographer Eduard Grau, with a cinematic touch that adds to the movie’s illusion of suspense and tension.

The maybe one downside to The Gift is a little bit slow as it unfolds its narrative as well as heavily borrowing from similar entries in this genre. Thus, something twists and turns can a slightly predictable. I personally didn’t, but I had a kind of feeling that first appearances would become the unthinkable towards the movie’s end and there was going to be a big twist around that time as well. Speaking of that, the movie’s big twist / reveal does come in the third act and produces a very satisfying one at that. Still, while it may play to familiar scenarios, Edgerton utilizes it to the feature’s advantage, giving off a sense of suspense, tension, curiosity, and a somewhat morbid dread throughout. Edgerton also gives the narrative several subplots, delving into the affairs of marriage, broken relationships, and life-altering traumas. It helps bolsters the main thread of Gordo’s relationship with Simon and Robyn, glimpsing into their lives and slowly seeing that there’s more to a person than just there frontal façade.

Before I start talking about the cast members, I do have to say that the three main stars of The Gift (Bateman, Hall, and Edgerton) do exceptionally job in displaying that awkward conversation talk (kudos to all three). Let’s start with Edergton’s Gordon (or Gordo). Edgerton definitely depicts his character as a very creepy / sketchy person, but also a relatable presence. At first, his performance is kind of slightly endearing (performing socially awkwardness perfectly), which then becomes an eerie presence and disturbing behavior. Most surprisingly, giving that the fact he is the mastermind behind The Gift, Edgerton downplays his role with subtly. Rather than stealing the spotlight (that some actors turned directors would do), Edgerton gives more screen time to his co-stars. He’s still a main presence in the movie, but doesn’t overreach Gordo’s on-screen presence.

I have to say that Jason Bateman turns a fine job as Simon. It’s interesting to see him in this role as Bateman is most notably known for his comedy roles like the television show Arrested Development or films like Couples Retreat, and Horrible Bosses (both 1 and 2). Bateman’s Simon is a sweet talking people-person who becomes slightly suspicious as Gordo re-enters his life, disrupting it and affecting his marriage. His portrayal of Simon gives Bateman an opportunity to showcase a different acting style, which he does great at. He probably won’t win any type of awards for this role, but it shows that the Bateman can diversify his acting ability beyond his genre comfort roles.

While Bateman and Edgerton were marketed as the big-ticket actors for The Gift, Rebecca Hall gets the most screen time in the movie and sort becomes the main focal point of the feature. Hall, who’s past works include The Town, The Prestige, Vicky Cristina Barcelona, and Iron Man 3, puts a new spin on the stay-at-home-wife with a struggle of isolation, loneliness, and one or two bad habits (Robyn has a past drug problem). Hall successfully is the emotional link for viewers to follow this psychological thriller, relaying her character’s personal loss, paranoia, and curiosity as she uncovers the mystery behind Simon and Gordo.

While some first time directors fail, others succeed. Edgerton’s The Gift falls into the latter category, delivering an engrossing narrative with three detailed characters; each having their own dubious mystery of duplicity. Yes, it’s a bit slow and tad bit predictable (borrowing common themes from other features), but that comes with the territory of the genre. It’s a dark and disturbing movie, but not so much that treads into the horror movie tone that was presented in the movie’s trailer. For that reason, I personally enjoyed The Gift as it more of character drama that explores the real world insights of people’s fears and insecurities as well as the “cause and effect” of psychological human behavior. With that said, Edgerton pulls off a great suspense thriller in The Gift, one that you should be seeing all, examining a narrative that, while entertaining, is also a poignant cautionary tale.