The boys are back as Warner Bros Pictures and HBO release the teaser trailer for Entourage. View trailer below.

Based on the HBO Comedy series. Movie star Vincent Chase (Adrian Grenier), together with his boys, Eric (Kevin Connolly), Turtle (Jerry Ferrara) and Johnny (Kevin Dillon), are back…and back in business with super-agent-turned-studio head Ari Gold (Jeremy Piven). Some of their ambitions have changed, but the bond between them remains strong as they navigate the capricious and often cutthroat world of Hollywood.

It’s been awhile since I saw this crew together and, with all the delays, I didn’t think it was going to happen. Luckily, it did. From the trailer, it looks like the movie will have the same vibe as the TV show had, which is a good thing, and presumable a hefty supply of Hollywood cameos to drop in and out of the feature as well. Am I read to see Vince, E, Turtle, Drama, and Ari again next summer? You bet your sweet you-know-what I am. 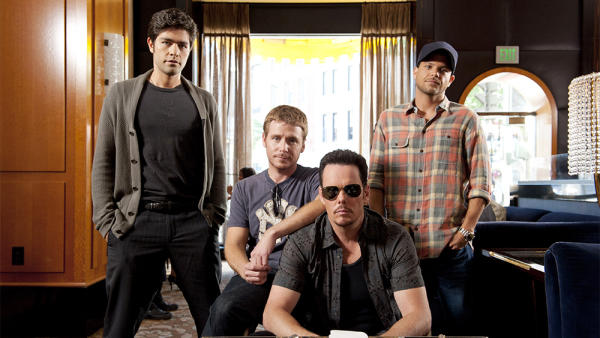