Learn the form, but seek the formless. Hear the soundless. Learn it all, then forget it all. Learn “The Way”, then find your own way. But do not name it, my friend, for it’s like water; nothing can overcome water, yet it can overcome rock. It does not fight; it moves around the opponent, boneless, nameless. The true master dwells within. Only you can be free”. Some words of wisdom to live from the 2008 film The Forbidden Kingdom, which is my cinematic flashback review.

“The path is unsafe. The place is unknown. The journey is unbelievable”

In South Boston, Jason Tripitikas (Michael Angarano) is a clumsy teenager obsessed with martial arts, movies of kung fu and Chinese culture. He frequently goes to the pawn shop of Old Hop to buy Chinese movies; while snooping the store, he sees an ancient staff in the deposit. Old Hop tells him that many years ago, a man left the staff with his grandfather but has never returned to take it back. When danger finds his way to Hop’s shop one night, Jason is caught in the middle; grabbing the staff and accidentally falls from the roof of a building and awakens in ancient China with the weapon. Soon, he befriends the drunken immortal Lu Yan (Jackie Chan), who tells him the story of the Monkey King, a mischievous immortal who was lured by the evil Jade Warlord (Collin Chou) and turned into stone. Jade Warlord transforms the peaceful realm in a kingdom of fear and violence. However, in accordance with the prophecy, a traveler would bring the staff back and save the Monkey King.

Always been a fan of fantasy-esque style of adventures in both literary forms and cinematic endeavors. So, I remembered when this movie original came out in 2008 and wanted to see, but missed it in theaters. So, I just decided to blindly buy the movie when it came out on home release a few months later. My initial thoughts…. while it isn’t quite the kung fu / fantasy masterpiece is wants to be, The Forbidden Kingdom is still a harmless and entertaining feature to pass the time watching.

Directed by Rob Minkoff, The Forbidden Kingdom is a take on the fantasy style of Asian mythology and cinematic tale; a somewhat crossing between 2001’s Crouching Tiger, Hidden Dragon aesthetics and nuances, a touch of classic “A Hero’s Journey” framework, and a splash Chinese lore. The end result is quite perfect, but Minkoff is still able to pull the film’s visual “look and feel” and storytelling. In truth, the narrative being told is somewhat reminiscent of kid’s fantasy adventures from the late 80s / early 90s (i.e. a young boy journey to another world / time and must undergo a quest through the land to free and find his way home). It’s a tried and true method of narrative framework, which is quite fun in the movie, with seeing main character Jason becoming the “stranger in a strange” land motif. Plus, the Asian setting and appeal is quite alluring and has that “mystical” quality throughout the feature, which Minkoff and his team pull off.

Additionally, the movie’s fighting choreography is fun, frenetic, and never boring; utilizing a lot of creative karate movements throughout. Plus, let’s not forget the real reason why main saw this movie, which was to see Jackie Chan and Jet Li collaborate together on the project and to see them actually “fight” each other (even though the scene I’m talking about is a bit long) definitely is the true highlight point of The Forbidden Kingdom.

The movie does struggle in script handling. True, the fantasy aesthetics and nuances of it all surely make the film enjoyable, but the film’ script (done by John Fusco) becomes problematic in certain areas, most notably during the movie’s second act. Plus, certain characters are either bland and / or unnecessary; creating half-baked supporting players in the story (i.e. Ni Chang). In addition, the movie’s visual style, while (of course) stylish in Asian appeal, comes off as a bit redundant and cheap looking, with several fighting sequences look “gimmicky” with the obvious flying through the air on wired connections.

As mentioned above, Chan and Li are great in the movie, with Chan amusingly fun as the drunken immortal warrior, Lu Yuan, while Li is fun as the stoic monk named “Silent Monk”. They are definitely the best part of The Forbidden Kingdom. In the middle, actor Michael Angarano and Yifei Lou are suitable in the roles as Jason Tripitikas and Golden Sparrow. Both characters are generic (i.e. the chosen one hero and the somewhat love interest for the hero), but Angarano and Lou are fine in their respectful roles. Could they have been better shaped in the film? Definitely. However, what’s presented is works. However, actor Collin Chou and actress Bingbing Li fare the worst in the movie as Jade Warlord and his assassin Ni Chang. What’s the problem? Well, it’s a combination of both the performances played by Chou and Chang as well as the thinly written script for their respective characters; coming off as both flat and conventional baddies in the movie.

In the end, The Forbidden Kingdom doesn’t really break any new ground in cinematics and storytelling, but it sure is a fun fantasy adventure to get lost in from time to time. Its struggles in certain areas, but is pure delight to see Chan and Li collaborate together in a movie, which (again) is a treasure unto itself. Just like Lu Yuan says at the end of the movie “And as one legendary journey ended for the Traveller, so did another journey begin” 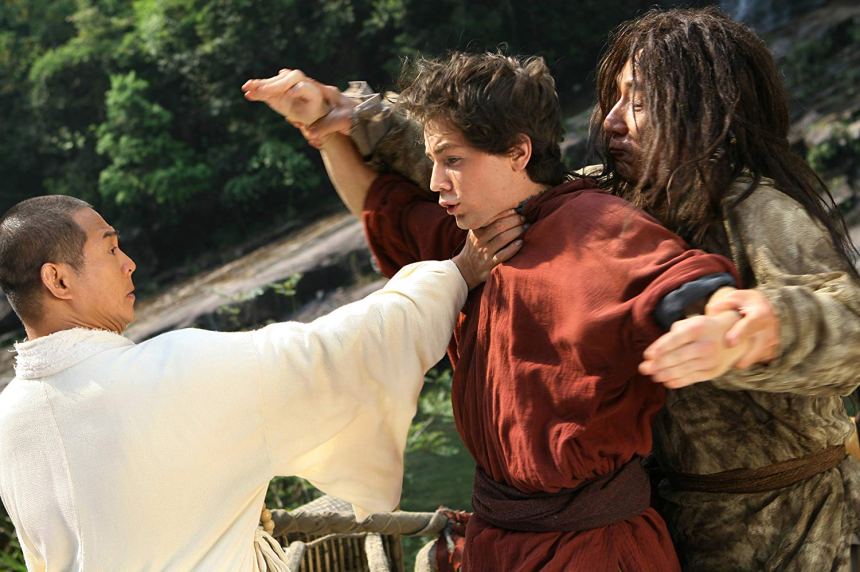 Cinematic Flashback Score: 3.6 Out of 5

Fun Fact: This movie was based on the Chinese epic story “Journey to the West”, a fictionalized account of the legends around the Buddhist monk Tang Sanzhuang’s pilgrimage to India during the Tang Dynasty, in order to obtain Buddhist scriptures. The film’s main character’s (Jason Tripitikas) last name is derived from Tripitaka, the monk who Sun Wukong, the Monkey King, accompanied in “Journey to the West”