RULES AREN’T FOR EVERYONE

Over the years, novel writer (or rather “series” novel writer) James Patterson has produced multitude of books that haven’t spread out threw many book series (roughly 14 series). Though he has faced many criticisms over the years (co-author more and more of his books and becoming a “series brand” writer), Patterson’s book always become best-selling novels and translated into multiple languages across the globe. Conceding with that, several of his stories have been adapted for the big and small screen, including Zoo, Along Came the Spider, Kiss the Girl, and the Women’s Murder Club just to name a few. Of late, Patterson has branched out of the general fiction / mystery genre and into teen and young readers, producing several novel series, including Maximum Ride, I Funny, Daniel X, Treasure Hunters, and Witch and Wizards. Now, with idea of adapting another book into a feature length movie, Lionsgate, CBS Films, and James Patterson Entertainment (yes, he produced the movie) and director Steve Carr present the first book in Patterson’s Middle School series titled Middle School: Worst Years of My Life. Does this newest kids’ movie pass the test (and get a good grade) or is it detention for this juvenile film? 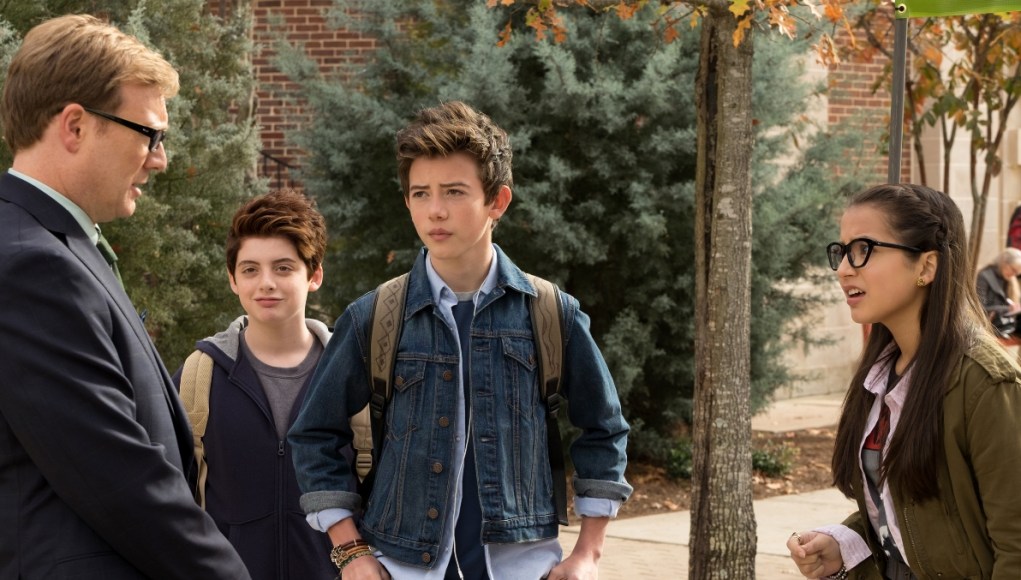 Rafe Katchadorian (Griffin Gluck), a juvenile delinquent with a gift for drawing creative works, is attempting a fresh start at a new school (Hills Village Middle School), with his mother, Jules (Lauren Graham), worried about his mind in the clouds (in his drawings) and his inability to focus. Upon arriving to school, Rafe is handed a list of rules set down by Principal Dwight (Andy Daly), exposing the young adolescent to the man’s vigorous control issues while trying to settle into his own class with his more liberal minded home room teacher, Mr. Teller (Adam Pally), confronted by the bully Miller (Jacob Hopkins), and developing a crush on AV geek Jeanne (Isabela Moner). With Dwight’s rules become increasingly frustrating, which is tied to an important standardized test, Rafe decides to end his principal’s reign of terror over the school, teaming up with pal Leo (Thomas Barbusca) to “take on the establishment”, commencing in a series of elaborate pranks meant to humiliate Dwight and break his beloved school rules. Also causing difficultly for young Rafe is Carl “Bear” (Rob Riggle), Julie’s dopey inhospitable boyfriend, who doesn’t think of her kids, inspiring the teen and his little sister Georgia (Alexa Nisenson) to seek revenge.

Working at a bookstore, I’ve seeing plenty of James Patterson books and, despite criticism, his books do steadily sell. I’ve read only a couple of them (the first two of the Maximum Ride series and the first book of the Witches and Wizards series). Thus, I’m not huge Patterson fan, but I can say that I’ve read some of his works.  As for the movie…I remember seeing the trailers for Middle School several times and (at first) I didn’t care to see it (I was probably going to wait for it to come out as a digital download to rent it). However, I grew a bit curious to see it. It seemed pretty light and running along the veins of similar kid-venture flicks out there. I did plan on reading Patterson’s book before seeing the movie (even bought the book), but, due to me being affected by Hurricane Matthew, I never got the chance to read the book before watching the film. Although, I still do plan on reading the book. So what did I think of the movie? Well, while it held my interest, Middle School: The Worst Years of My Life is your run-of the-mill kids film that has some standout moments, but also its fair share of problems.

Middle School is directed by Steve Carr, who has directed several other kid-like comedies film such as Paul Blart: Mall Cop, Daddy Day Care, and Are We There Yet? With the body of work, Carr, along with screenwriters Chris Bowman, Hubbel Palmer, and Kara Holden make the movie approachable and accessible to kids (similar to how it was with 2010’s Diary of a Wimpy Kid and its sequential sequels). The film’s humor is also geared towards its target audience with plenty of one-liner jokes and slapstick gags that will make tweens laugh (and maybe a few adults as well). Like a lot of kids, underneath all the tween shenanigans, there’s kid-glove drama elements weave into the story as Middle School tackles some issues about expressing creativity, family, and loss. It’s nothing new for these types of movies, but it is a welcomed one. Lastly, the film utilizes Rafe’s imagination and drawings, telling various scenes and bits through cartoon animation. These sequences are actually pretty cool to see it. No, the animation style won’t rival or beat out a Disney or Pixar animated feature, but its unique, colorful, and works for the movie. All in all, Middle School is fun romp for tweens, fill barrage of kid-friendly fanfare throughout.

There are several problems with Middle School. For starters, is that it is a derivate kids’ movie, set in the same fashion as others that have come before. You know what I mean…the kids are smart and clever, parents are clueless, and some adults are mean spirited. Since the film’s target audience is for tweens, it hits its mark. However, I wish I could’ve seen a “game changer” when it comes to this notion as it felt a bit “been there, done that” in way too many kids films. Another problem is what the film shows and doesn’t show. Given my synopsis of the movie above (and in its trailers), Middle School promised a lot of tween mischief of Rafe breaking Dwight’s infamous school rules. What’s given in the movie’s final version is something more diluted. Yes, there are pranks to be had in the feature, but not all of them and not enough. The film alludes to over a 100 rules (obviously they couldn’t show all of them), but it would’ve been nice to see a few more scatter throughout the movie.

In addition to this, the movie Basically, Middle School shows these elaborate pranks, but Carr doesn’t seem to interested in show “how” the pranks were pulled off. I mean the kids in the movie get away with a lot (breaking into the school at night and such). Kids viewers probably won’t mind, but it just seems contrive that Middle School shows the final product of the pranks, but not full setup of the pranks themselves and they never get caught by their parents.

Then the film’s ending is a bit wonky. It wraps up in a serviceable way, but doesn’t disclose what happens to many of the characters. I would’ve liked to seen at least an additional 3 to 4 minutes added to the movie, which shows the various characters (both major and minor) completing their film’s journey (whether moving on, returning to the status quo, or getting their just desserts). I don’t know…maybe I just wanted a bit more closure to the narrative. Lastly (this is only a minor thing), there could’ve been more about the middle school life at Hills Village Middle School. We see snippets here and there, but the movie never delves into social structure beyond Dwight’s authoritative rules.

The cast of Middle School was pretty good selection of several recognizable faces and unknown child actors. Actor Griffin Gluck, who’s mostly starred in TV shows like Private Practice, Red Band Society, and Back in the Game, plays the central protagonist Rafe Katchadorian (wow…that last name is a mouthful). Gluck makes Rafe out to be a very likeable character, making it easy (almost a starch black and white comparison portrayal to the film’s antagonists) to root for as he wages a sort of prank war against Principal Dwight. Similarly, Alexa Nisenson does a likeable job as Rafe’s sister Georgia (both Nisenon and Gluck have good chemistry with each other). The same goes with Thomas Barbusca and Isabela Moner, respectfully as Rafe’s longtime pal Leo and Jeanne (Rafe’s love interest in the movie). Lastly, all of the kid actors is Jacob Hopkins, who plays the traditional “bully” role in his character of Miller (again do a decent job in that capacity). In truth, all the kid actors in Middle School (both major or supporting) were surprisingly good. I’m not saying that they are going to be nominated for their performances in the movie at this upcoming award season, but they got the job done and delivered fine roles for their characters. Believe me, I’ve seen some bad child acting over the years.

As for the adult actors in Middle School, perhaps the best goes to Andy Dale as the feature’s main antagonist principal Dwight. Daly, known for his multiple small roles in various TV and film projects, gets some great lines in the movie, which are humorous and does fine job as the goofy (but strict) principal. Similarly, the same goes for Rob Riggle, playing the film’s other antagonist Carl (or known to Rafe and Georgia as Bear). The character of Carl is a bit mean-spirited, but still goofy and Riggle does a good job in filling out that role perfectly. Former Gilmore Girls and Parenthood star Lauren Graham plays Rafe’s mom Julies. It’s nothing new (almost a bit cliché), but Graham is perfect as the “mom” character in a kid’s movie. Actor Adam Pally was good as the hip and cool teacher Mr. Teller (I wish I had him as a teacher. I would’ve loved going to school more…haha). Filling out the cast (in more minor supporting roles) are Retta as Ida Stricker, the school’s vice principal, and Efren Ramirez as Gus, the school’s janitor.

Rules aren’t for everyone as Rafe and his fellow classmates soon discover in James Patterson’s film adaptation of Middle School: The Worst Years of My Life. Director Steve Carr newest film venture does target demographic in mind as there’s plenty of kid friendly shenanigans throughout. It’s a light and breezy film that has some good acting, especially from its kid actors (nothing cringe worthy), some humorous bits, and some usage of some stylish animation. However, the film doesn’t reach new heights within the kids’ / tween genre (feeling slightly derivate), while also failing on delivering some of its prank scenarios, and a clunky ending. Personally, l thought the movie good and fair. It wasn’t anything riveting or a game changer per say (and could’ve been a bit better), but the movie held my interest and was a light movie to watch. I actually might buy when it comes out on Blu Ray (when it gets discounted a bit). As for my recommendation, I would say that it’s an iffy choice as kids and tweens might like it the most, while everyone else might not care for it. Will we see James Patterson’s second installment (Middle School, Get Me Out of Here!) come to life on the big screen? My guess…probably not. For now, Middle School: Worst Years of My Life is your average kid’s madcap feature film, filled with juvenile pranks and teaching lessons about life and expressing creativity.

Middle School: Worst Years of My Life  is rated PG for rude humor throughout, language and thematic elements